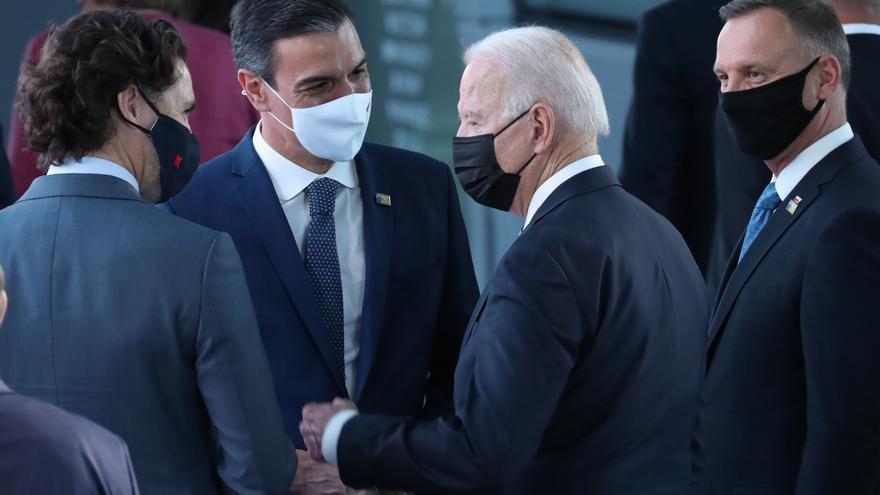 There was a time decades ago when the lack of operational diplomatic channels between the US and the USSR put the world in situations of maximum tension. The Cuban missile crisis is a familiar example. In an earlier era, the First World War demonstrated what could happen when the opposing countries were unaware of the real military potential of their adversaries and, in the case of the Austrian empire, even their own. Today's world is different. Everything is broadcast live, each public statement travels the planet in a matter of seconds on the Internet, but the risk persists that the commitment to military solutions in some conflicts ends up neutralizing the well-publicized attempts to resolve them by way of diplomacy. That goes for the current confrontation between Russia and NATO, and also to check its impact on Spanish politics.

What has happened in recent days has revived one of the factors of division that have existed since the eighties between the PSOE and Izquierda Unida and that have been transferred to the interior of the current coalition government. Socialists have always been Atlanticists since Felipe González called the referendum for Spain to continue within NATO. To his left, in the position that United We Can now occupy, participation in the structures of the Atlantic Alliance and military collaboration with the US through its bases in Spain have always been rejected. So far, everything normal and even routine.

What is striking about the crisis that is taking place at the moment is that all the Spanish parties are committed to demanding that it be resolved with diplomatic arguments, that is, doing everything possible so that it does not end up being solved with the use of force. But that does not mean that everyone thinks the same, not even within the Government itself.

"This conflict can only be resolved through dialogue, relaxation and the conviction that peace is the only way," said the statement signed on Friday by several leftist parties, including United We Can, with which they rejected "the sending of Spanish troops to the Black Sea and Bulgaria". Pedro Sánchez spoke this weekend with the Secretary General of NATO. According to Moncloa, he conveyed "his commitment to dialogue and his confidence that diplomacy is the path to de-escalation".

Moncloa released four photographs of the president speaking on the phone to illustrate his calls to Jens Stoltenberg and Ursula von der Leyen, president of the European Commission. This is an image trick used a lot by world leaders. Photo with the phone in his hand (was he posing or was the photo taken during the call?). Look of concern. Informal clothing if it is on the weekend. Very little information. I have called (insert name of head of state or government) to discuss the conflict in (insert name of country in trouble). For example, David Cameron did it because of a call from Obama. and that led to a great joke in which the actor Sir Patrick Stewart participated. It is already known that people take advantage of everything.

It is easy to speak for peace. In fact, it is essential. However, everything changes when it is explained how to get it. At that point, governments are often not so precise and the citizen lacks information about what is the essential position that justifies adopting a military deployment. The Government affirms that Spain must fulfill its obligations as a member of NATO and collaborate with its allies. That is what would justify the departure this week of the frigate Blas de Lezo bound for the Black Sea to participate for two months in a NATO mission whose objective is to maintain pressure on Russia.

Focused on the economic crisis of a decade ago, the Government of Mariano Rajoy did not hide his lack of interest in getting involved in the crises in Eastern Europe. Sánchez wanted to show that he intended to have a role in that area at the height of his aspirations to have influence in European affairs. In July 2021, he traveled to Latvia and Lithuania on the trip in which a press conference with the Lithuanian president had to be abruptly ended for the emergency takeoff of an air patrol.

What Sánchez has not done is explain what his government thinks about the issue that is at the root of this crisis. Are you in favor of Ukraine's future entry into NATO? Do you think that the EU should stand up to Russia and deny its veto to future expansions of the military organization? Perhaps the Foreign Minister will shed some light on the matter in his appearance this Tuesday in the Foreign Commission of Congress. It is also possible that it moves in an ambiguous zone so as not to offend the US or Russia, one of the options that Spanish diplomacy resorts to so as not to have to define itself.

The statement from United We Can and other parties such as ERC, EH Bildu and Más País does refer to these controversial issues. He opposes a future integration of Ukraine into NATO for being "a breach of the commitments of the organization itself." This is something that Russia has always maintained about the agreement with which Washington and Moscow agreed on German reunification.

No treaty was ever signed in which NATO gave up its enlargement to the East. But what did happen was that the leaders of the US, France and the UK they promised Mikhail Gorbachev that it would not happen.

"Before I say a few words about the German issue, I want to stress that our policies are not intended to separate Eastern Europe from the Soviet Union. We already had that policy before. But today we are interested in building a stable Europe and doing it together with you." US Secretary of State James Baker told Gorbachev in May 1990. Baker had said in February of that year that NATO was not going to move "an inch east."

The US and the European countries were focused on launching a new relationship with the USSR –and later with Russia– that would allow the reunification of Germany. Years later, they forgot about those verbal commitments. The image of Russia in Western countries also changed completely when Vladimir Putin made decisions in countries like Georgia, Moldova or Ukraine that made it clear that he would not allow those countries to leave the Russian sphere of influence.

Podemos also asks for measures "that satisfy both parties on the border between Russia and Ukraine." That is impossible today, because Ukraine demands to be able to extend its sovereignty to the eastern regions that it lost in 2014 due to the Russian military intervention, as well as the Crimean peninsula annexed by Russia, while Moscow will not relinquish that control if NATO does not undertake to prevent Ukraine's entry into the alliance.

The coming weeks will test the commitment of the Government and the PSOE through diplomatic channels. The irreversible path to war has not yet begun, no matter how alarming the media reports may be. Still, it may be that Washington or Moscow, or both, decide that military intervention, however limited, is an unavoidable option to achieve their goals. It is certain that Sánchez will then feel compelled to stand by his allies. Only then will he begin to be clear about the political price he will have to pay in Spain.