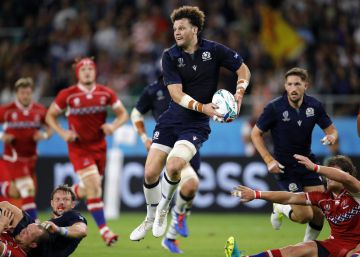 While social networks are filled with the ironic cries of Scottish fans in Japan, their selection seeks the loophole to get around the effects of the Sugiphon Hagibis and that his party with Japan be decided on the grass. Any lawn, because its coach, Gregor Townsend, made it clear that it is worth a training ground: "We only need players and referees." Not even television cameras or spectators. After the suspension on Thursday of England-France and Italy-New Zealand, the first to be canceled in the history of the Rugby World Cup, the Scots demand a contingency plan if the passage of the typhoon through the Tokyo area does not allow the dispute Sunday's meeting with the hosts in Yokohama. And, they say, they will take legal action if they are eliminated in the offices.

Scotland needs the victory to overcome Japan, which surpasses it by four points. The cancellation of the match would mean a zero draw and two points for each, insufficient for the XV del Cardo, which would be eliminated. Scottish fans were preparing for the worst scenario while waiting for the arrival of the virulent typhoon. "If you follow Scottish sport, it is best to arrive soon to the sites to have a good time before losing," said one of them. A defeat against the weather would overcome any precedent of bad fortune.

Still, Townsend wields optimism. “We believe that the match has not been canceled because the forecasts are much better for Sunday. It seems that the game will be played and we have to keep the faith in that way. ” The bet of World Rugby is to wait for the typhoon to pass on Saturday and assess damage on Sunday morning. The international federation ruled this Thursday to transfer it to another headquarters and it does not seem feasible to change its mind and encourage the displacement of 72,000 spectators with tickets in the middle of what could be a natural disaster of great magnitude.

The Scottish coach's argument is that it would be "very unusual" to suspend the match the same day. “Let's say you are looking out the hotel window at five in the afternoon and there is sunshine. It would be strange if the game could not be played. ” In any case, accept any contingency. “If you play in Yokohama, great, but we have faith that the game is played even if it has to be behind closed doors or at another venue. Or if it has to be Monday because it takes a day to put things in order. ” To the Macedonian group A is added Ireland, which will play on Saturday in Fukuoka against Samoa. A victory would qualify them for quarters; they would need a defeat from Japan to lead group A and avoid the All Blacks, who will wait for the second place on Saturday 20th.

Italy's precedent is not good. The cancellation of his match against New Zealand meant his elimination, as mathematics gave them options to qualify if they had won, a milestone outside of any forecast, but possible. “If they had needed the points, it would not have been canceled. Surely everyone thinks that the game would not have counted at all because we would have lost anyway, but we deserve to be respected as a team. We had the opportunity to play in a great stadium against a great team, ”said captain Sergio Parisse.

The Italian striker lamented the circumstance of his partner Leonardo Ghiraldini, who was going to say goodbye to the All Blacks. "That your career with the selection ends after a workout is something difficult to fit." Paris harshly criticized World Rugby for not having an alternative plan in a part of the planet used to these phenomena. "It is ridiculous that there is no plan B, it is not just missing news of typhoons impacting Japan …"

Meanwhile, Japan coach Jamie Joseph lamented the legal scenario. "All these conversations about legal proceedings about something uncontrollable like a typhoon ignore how important this party is for us." The New Zealander vindicated his pupils in the face of the most important encounter in his history, as it would be his first pass to the rooms. “We have won three games. It is no accident, there is a lot of work behind. This team has been concentrated 240 days and we are an amateur team in which no player charges anything beyond the diets. We all want to play the game. It is important for us to get up on Monday and know if we deserve to be in the top eight or if we are not good enough. My team is motivated to get something big, not to avoid embarrassment. ”

Valencia – Barcelona: Timetable and where to watch the match and possible lineups

LaLiga Santander 2019 – 20: Alavs vs Villarreal: Schedule and where to watch live and online TV