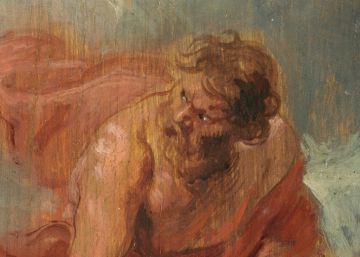 The titan who hated the gods gave humans fire, with which they dominated nature. Fire is the origin of civilization, the age of knowledge that freed mortals from false beliefs and parapet them in science. Prometheus, the myth that Rubens recovered to decorate the Torre de la Parada –a hunting estate of Felipe IV, in El Pardo (Madrid) -, has become the metaphor against resignation and cynicism, an invitation to avoid ignorance to do us the least damage possible. Quarantine reminds us. That portentous being, who looks sideways to see that Zeus does not follow him in his flight, is the myth of the fight against stupidity, the standard bearer of the thought revolution. The work, painted on a small oak table, is in the Prado, where it is exhibited in a showcase in the room dedicated to Rubens, although during these closing weeks it was also can be seen in high definition through the museum’s website.

The painter himself acted as a scientific god in building with the precision of an engineer this world as perfect as it is unreal. The surface of the table (there are about fifty sketches like this one, about 25 centimeters high, which he made between 1636 and 1638) is riddled with marks that guide the painter: traces of the compass he used to trace proportions, distribute forces and locate characters, with maximum precision in minimum dimensions. As a geometer of the human body: “The elements of the human figure are the cube, the circle and the triangle,” Rubens wrote. And like a mathematician of emotions: the Flemish artist painted for the Spanish king a world without blemish, where the only defects are those carried by the human being himself. The hidden miseries reveal them with a simple gesture. Rubens studies them and discovers them as the best director of actors.

The act of Prometheus ends up becoming the zero degree of all the utopias of modernity and this small and exquisite table, in the demonstration of how little painting needs to become a masterpiece. The artist has operated with agility: while the body of the knowledge thief is limited by a line that underlines his muscles, the fabric of the robe that covers him moves with light and shadow blows. The urgency of his brushstrokes did not prevent the care of the reflection of the brightness of the torch – with three touches of a burning red – on the chest of the protagonist. Fly over nothing, as Velázquez had done a year earlier with Pablo de Valladolid.

Virtual visit: Prometheus, by Rubens, in the Prado Museum.