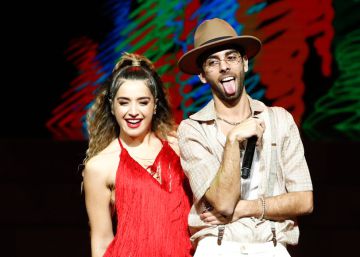 He was born with the idea of ​​being a musical celebration and has ended up becoming a martyrdom. Held at the Teatro Real in Madrid last Monday night, the Odeón awards gala, a few awards aimed at recognizing the best of Spanish music, was a trail of technical failures and lack of coordination in direct plenary and prime time in La 1 to the point that RTVE yesterday asked for explanations from its organizers. Those responsible for the realization, the AGEDI association (responsible for managing the copyright of phonographic producers), lamented the rejection of the public body although they defended live music even "with errors."

More than 25 musicians came up to sing or speak on stage at the Teatro Real during the Odeón awards gala and almost paraded as many mistakes as Spanish pop stars. In the broadcast and with an armchair patio full of artists and executives of the record industry, Alejandro Sanz could be seen making a gesture to the technical team because he was not heard well, to India Martínez receiving a muted microphone, to several musicians exercising of presenters without a script and taking off their little pins because of the return and even a piano playing without the pianist during Beret's performance.

“The whole voice was live. Not so all instrumental music. There were recorded parts like the meddley Beret's piano Or the bases of Don Patricio ”, excuses himself in a telephone conversation with EL PAÍS Antonio Guisasola, president of AGEDI, who read a speech during the ceremony before the watchful eye of the Minister of Culture and Sports, José Manuel Rodríguez Uribes, and the president of the Congress, Meritxell Batet, present at the Royal Theater. AGEDI hired Cibeles Producciones for the occasion, in charge of programs such as A country to eat it. Guisasola says they made "a risky bet" with 25 musicians performing and "both coming and going from people on stage", but believes that the gala "was more than acceptable." “There were technical errors, but it was a risk we assumed. We bet on a live gala because we believe that the greatness of a musical show is direct. We could have done it canned, but we didn't want to. ”

After the first performance of the night, an open mic let you hear behind the scenes the words of the host of the gala, the comic Quequé: “I want this to end!”. Minutes later, he took the matter from iron: "It's a lie, I'm having a great time." But it didn't matter: his comment had been cast on the antenna. The humorist laughs at the situation and assures EL PAÍS that "it was the least serious thing he said behind the scenes." "Besides, I always want to leave the sites because I'm better at home."

It has not been an excuse for RTVE. In a rare movement, the public network yesterday released a statement to uncheck a televised event that reached 1,327,000 viewers. “The desire of the RTVE management to promote and support music motivated the commitment to the issuance of the Odeón awards gala (formerly Amigo awards), on Monday, January 20 for La 1, live and on the fringe time of maximum audience ”, collected the statement. "Unfortunately, the result of this gala, carried out and produced by AGEDI, was very far from the quality standards required by RTVE in its programs," he added.

Sources of the chain assure that the gala of the Odeón awards "have not fulfilled the desired expectations" and that, therefore, they have wanted to make public "their disagreement". And, above all, they emphasize that Spanish television “put the antenna for the broadcast, but that at all times it was a finished product”, that is, the gala was broadcast as an event without any realization by them. From the entity is what they call "turnkey product", a different model, for example, to the Goya gala, "a hybrid product", where the chain puts the cameras and the filmmakers, although the direction and sound run in charge of the Film Academy.

The ceremony of Odeón awards registered a 9.3% screen share, being in second position behind Live without permission of Telecinco. It was a bad fact for him prime time of The 1: the average audience of the chain in 2019 was 9.4%, but it is assumed that the programs broadcast in primetime should be above to take advantage of the moment of more television consumption of the day. A week before, The 1 had more audience: 1,335,000 viewers (19.1% share) with the film To the limit.A title that, in addition, whims of fate, anticipated what was experienced on Monday night at the Royal Theater.