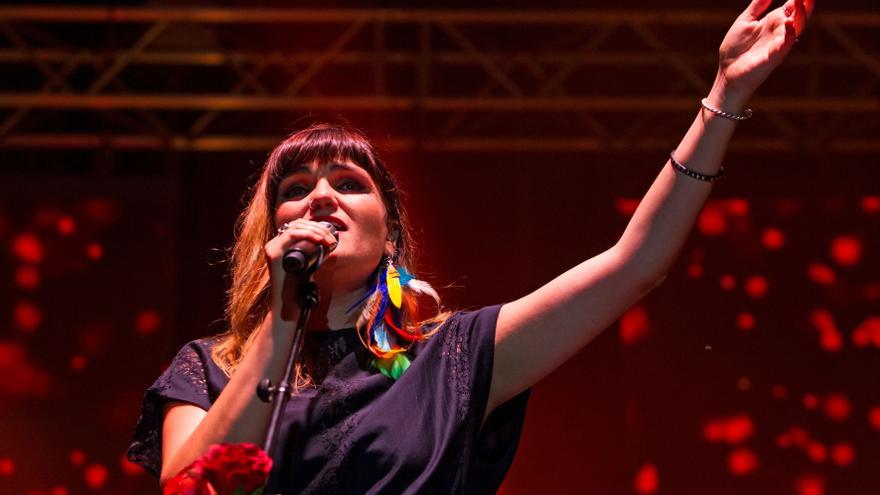 Malaga, Jun 4 (EFE) .- The singer-songwriter María Rozalén has dazzled her followers with an energetic and exciting performance on her return to the stage for the start of the tour of her latest work "El arbol y el bosque", an album that saw the light during the pandemic and in which it unfolds its entire emotional universe.

The first song of the artist from Albacete was a declaration of intentions for the excited public, some with tears in their eyes, who asked them to get on "This train", honoring the name of the first theme of her new album, one of the most personal of the singer.

Rozalén, excited during the first bars of the concert and dressed in a discreet black jumpsuit, has been accompanied by her inseparable sign language interpreter, Beatriz Romero, in a staging that has featured three electric guitars, a Spanish guitar, a piano and a drums.

The artist has made the hair stand on end when she broke her voice singing "Caged Birds", a song that advocates for freedom and that became an anthem during the pandemic. A theme that, after his return to the stage this Friday, has made more sense than ever and has lifted the public from their seats for the first time.

"Do you remember when we thought we were going to get better out of this?" Rozalén wondered about the pandemic, he confessed that he did not intend to publish that song on the album and added that they are in "a moment of great mental fatigue", but he has advocated looking for a "light" that "always triumphs" .

The artist, who was "made a flanecico" in her words, has expressed that the "biggest fear" she had was "not being able to control the set of emotions" she felt on stage, after which she stated that seeing the capacity "Llenico" was a "tremendous" pride and he thanked the people of Malaga who are committed to culture.

The also activist has continued with her song "La línea", a song about migration -which is better understood than ever by what happened recently in Ceuta- and has commented that "to leave is always to split in two" before a performance after the that has received a great ovation from the public.

The composer from Albacete has chosen Malaga to present her fourth studio album to the public for the first time, in a journey in which there will be twenty-one more stops throughout the Spanish geography. This will be for Rozalén, in his words, and his team the tour they have most wanted in their lives.

María Rozalén, who managed to win a Goya Award in 2021 for Best Original Song with the song “Que no, Que no” –for the film “Rosa's wedding”, by Icíar Bollaín - has dazzled a diverse audience with her magic that he did not understand gender or age and has expressed that "he did not believe that he would be back" and that he "missed" the public.

Rozalén's overwhelming timbre invited attendees to enjoy her voice and forget about mobile phones for a couple of hours, an effect that she achieved and that made the same people who started the concert timidly end up surrendered to the artist and standing in their seats.

La Manchega, who has dared to dance and even to poetry, has given everything on stage and has sung new songs from her album such as "A tu vida", "El día que yo me muera", "Loba" , “Y searched” or “Amiga”, dedicated to her sign language interpreter, Bea Romero.

Nor has he forgotten important songs from his career, such as "80 times", "Live", "It will be better", "Girasoles", "Vuelves", "The violet door" or "The passage of time", with which has closed a first and exciting concert of his tour, almost two hours long.