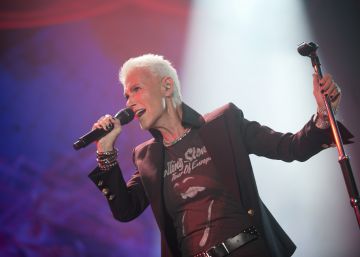 Marie Fredriksson, singer of the Swedish pop music duo Roxette, has died at age 61 from a brain tumor "after a 17-year fight against cancer," according to has announced it's a statement his representative office, Dimberg Jernberg.

"Time goes by so fast. Not so long ago, Marie and I spent days and nights in my little apartment in Halmstad, listening to the music we loved, sharing impossible dreams. What a dream we came to share," wrote Per Gessle, Fredriksson's partner in the duo: "Thank you, Marie, thank you for everything. Thank you for painting my songs with the most beautiful colors, my songs in black and white."

Fredriksson was born on May 30, 1958 in southern Sweden. He began his musical career in Halmstad, where he met Gessle. Roxette was formed in 1986 and her first single was Neverending Love In April 1989 they became a great success with The look and, after taking the international leap, they have offered 557 shows throughout their career, sold 75 million records, and reached four numbers one on the list Billboard American.

To vocalist was diagnosed with a brain tumor in autumn of 2002 from which he recovered seven years later. Between 2010 and 2016 Roxette published musical albums again, and offered concerts around the world. During one of these tours, in 2016, doctors advised Fredriksson to stop traveling, with the cancellation of the rest of the concerts.