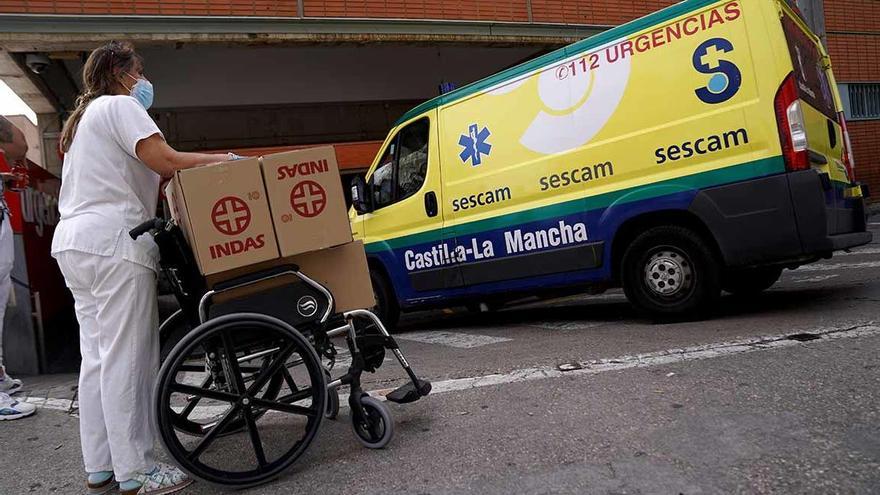 Five years have passed. Gemma Torrejón, who had moved from the brand new clinic in Talavera de la Reina, was beginning to learn that she had come to a very old and tired health center. Today he explains that lack of hygiene due to laziness and fatigue from “the eternal wait for a new hospital. It is that there are already twelve years of interrupted work.”

The city in which he lives is, of all the capitals of Castilla la Mancha, the one with the highest incidence of covid: 346 per 100,000. A serious concentration of virus in Talavera (740), exceeds Toledo by far, but at that point on the border with Extremadura, it does not happen, as in Toledo, that the sick do not fit in the hospital.

In Toledo beds are crowded around the emergency room control, lined up one behind the other like wagons. The nurses pass through the imaginary platform taking the temperature of the suffering load of each mattress, and squeezing a hand that is raised to ask. Inside, in the ICU, 34 people from that plant are intubated.

“The lack of space in the ER is causing suspected covid mixed with patients with other pathologies to wait to be treated,” denounces the nurse in that area of ​​the Virgen de la Health Guadalupe Pérez.

Although he has been attending the ER for 20 of his 45 years, he does not stop stressing from the unusual pressure. “Now we cannot even guarantee a clean area and a dirty area,” he says at the door of the hospital, amid dripping ambulances – constant, as was seen in Pamplona – arriving at the health center.

The covid broke the wall and made a dangerous incursion in the Virgen de la Salud last September: outbreak in the areas of Vascular and Neurosurgery. Doctors barely rejected the invasion. More or less since then each day is a journey on the brink of collapse.

It is impossible to separate the sick well. At the door of the emergency room, health workers, ambulance technicians, patients and visitors mill about and separate in a somewhat disorderly commotion. On All Souls’ Day, there were already 36 people waiting in the morning. Nineteen were “covid positive”. In week 34 of the pandemic, the coronavirus has laid siege to the Toledo hospital.

The inert building of Benquerencia

In the biography of Gemma Torrejón, two planes of the pandemic in Spain intersect: she has been infected with covid and her daughter lives and works in the rebellious Madrid of Isabel Díaz Ayuso. Torrejón has just been discharged after he was infected on October 11, and after going through the entire catalog of symptoms in 20 days of prostration: tiredness, fever, headache, muscle weakness, diarrhea, and shortness of breath.

Your back still hurts if you breathe hard. On Todos los Santos Bridge, when her isolation was over, her daughter called her from the Río 2 shopping center in Madrid. She is a clerk in a Levi’s store. “Mom, this is petao,” Gemma says he told her.

Today Torrejón is the provincial secretary of the Satse nursing union, from where she has seen the public health of the region slice slices. “When the need for strong sanitation was not so visible, it was cut back. And now the pandemic takes us in this situation, “he laments.

On the outskirts of Toledo, the N-400 jumps over the Tagus and runs between fields that are disturbingly dry for autumn. On one side of the road is the industrial estate (before they called it a neighborhood, and before that town) of Santa María de Benquerencia. And the name doesn’t hurt: the inauguration of the new Toledo University Hospital has been expected there for twelve years. President María Dolores de Cospedal He never cut the ribbon. It is actually 20 years since the need arose, and twelve years; just since 2008, that the financial crisis sharpened the scissors.

Now the old hospital services will begin to move which was planned before the bubble burst as one of the largest sanatoriums in Spain. But it won’t give the giant time to get up and fight the covid. He still has construction fences all around him, and the big poster for his directory covered by a masonry tarp.

But it is almost finished. The move will begin soon. The last to leave the Virgen de la Salud will be those from the Emergency Department … by June 2021. The second wave that hits Toledo will be history.

The shock wave of Madrid

Back on the road, to the north. The municipalities of La Mancha neighboring the community of Madrid they form a worrying belt because of how many people from Madrid and Toledo cross and sweat together in the industrial buildings that have grown on the border to take advantage of the cheapest square meter.

“The toilets there are bad, very stressed. What happens in Madrid, happens in Toledo”recalls Guadalupe Pérez. A part of the Madrid craft class actually lives in Toledo. They are plumbers, plasterers, masons, blacksmiths who daily leave the towns south of the Madrid limit and enter the works and industrial estates of the great conurbation.

The Madrid covid is your covid. Pure shock wave. And in few places outside of Madrid are Diaz Ayuso’s perimeter semi-closing decisions followed more than in this extreme of Castilla-La Mancha.

The towns of the Seseña-Illescas axis have a lot of viruses; they are dark blue dots on the map of the Directorate General of Public Health, far from the white that the Mancha villages appear below.

In the Illescas Health Center they have begun to manage cases of their neighbor Yuncos. They are synergies: the most serious will go to the Toledo funnel. Both Illescas and Yuncos have already released the month of October with alarming incidents: 736 and 827 per 100,000. Outside the office, a man tells another that he has a concussion. “But I have not had an X-ray for not saturating more,” he explains.

From the Toledo phone booth Stephany, Simona bely he sends few euros to the family in Maimón, Dominican Republic, because the work of caring for the elderly is scarce; in the houses they do not trust. “It’s hard being an immigrant now. You are without family, hoping not to get sick “, bill. Simona struggles alone in the midst of the hurricane of the crisis: “Sometimes you don’t even have enough to live on,” she says. Better not look for work in Illescas.

Not a sword is sold

In the shadow of the huge fortress, the merchant Rafael Gonzalez its souvenir shop Artesanía A. González opens and closes every day. He inherited it from his father, who still gives him its name. Inside the damascene, the inlays, the Don Quixote figurines, the swords and the armor shine, without customers looking at them wondering where in the room they would place them.

“He is not coming tourism Not even a sword is sold, “laments the shopkeeper. González is an example of the city’s dependence on the capital: tourist buses rained from it; he went to her before the perimeter confinement when he wanted to be distracted; and Atlético de Madrid became a fervent partner, today chained to television, without the possibility of following him around Europe.

Because he is the owner and he has no employees, no rent to pay, Rafael González can endure entrenched with his arsenal of lies. Along with swords and armor, he exhibits packages of flag and non-flag masks. “It is what is sold the most now,” he excuses himself.

On the terrace of the parador, with unrivaled view over the city and now strangely empty, the sparrows, accustomed to being thrown bread crumbs by the public, now search in vain for humans to eat from. There are not many out there.

“This is very quiet,” says waitress Alcázar Castro euphemistically. Looking up at the cathedral, which has begun to light up with sunset, she says she misses weddings. Now they are not celebrated in the cigarral. “It is because of the covid – he explains -. Here we are strict: if seven come to eat, four at one table and three at another,” he has a sorry expression.

One hundred and thirty-seven kilometers of highway and “State of alarm” signs further south, in Consolación (Ciudad Real), the Casa Juan bar opens the dining room to truckers who will spend the night in its parking lot. A plastic owl presides over each tablecloth holding a piece of paper: “Disinfected table. It can be used.” On the wall, a white virgin wears two military medals. The waitress looks at her and explains: “She is not the one from here, she is the patron saint of Membrilla, who this year has not held a pilgrimage.”

It is already dark night. Toledo is left behind. In the center of the city bells ring; and in the outskirts, to the avenues that surround the new and empty hospital, some neighbors have gone out to run, with or without a dog, with or without a mask. No light shows signs of life in the bunkers of the health center. The inhabitants of the newly built apartments in Benquerencia exercise around the inert building. Jogging, you know, is good for your health.

Route through perimeter Spain (2): The worst is uncertainty

Route through perimeter Spain (3): Fire in everyone’s body and soul

Route through perimeter Spain (4): The night is one of the essentials