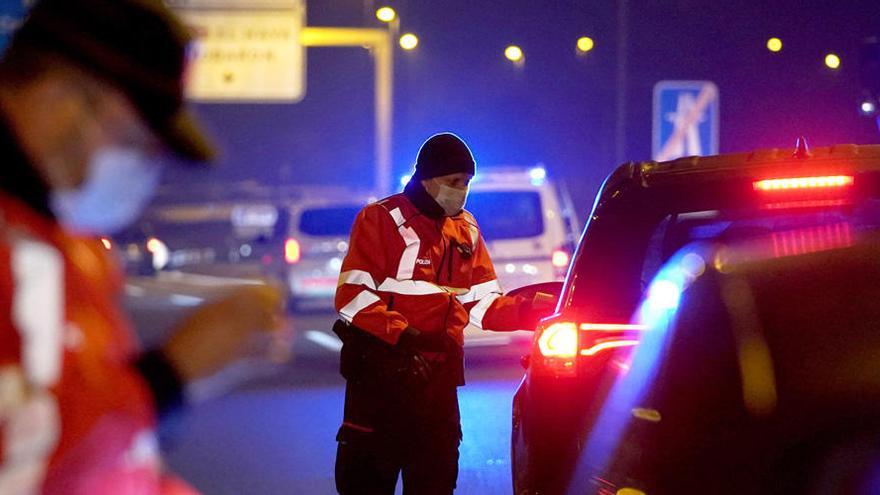 What was an almost total relaxation of the vigilance of the perimeter closures has turned into a big, sudden and random hold on the A68, on the Cantabrian line, as if the Basque Country now wanted to contain a flood of covid. In the last Basque corner, the El Haya-Auzoa neighborhood of Muskiz, the Ertzaintza has set out to check who has left for Castro Urdiales on vacation and who has justified cause to break the Basque perimeter confinement.

Anyone who does not comply with the confinement will be reported, and may receive a fine of … “It is not known very well how much, because there have been many changes since the first state of alarm,” the policeman tries to explain from behind his black mask, while two of his colleagues demand proof from the drivers. “Before they were penalties of 600 euros. Now I think they are 150, one hundred with prompt payment. That makes us helpless. It pays for many to go off the bridge for a hundred euros, “says the agent, and he re-lights his lightsaber to go back with it to cut through traffic.

The scene is metaphor of the autonomic steps in the pandemic. In the huge crowding of cars, a landscape worthy of Julio Cortázar that stretches out as far as the eye can see, it seems as if the flashing lights are reporting in Morse code what is happening in Spain in the second wave. At the foot of the mountain, on the Basque side of an imaginary line, lockdown by towns and more than 26 percent of ICU beds occupied by covid patients; on the Cantabrian side, 13 percent and no perimeter confinement.

The masons from Construcciones Maxistil have not left Castro Urdiales to cross the bridge. They sleep there, work in the Basque Country and save on overnight stays in the community next door.

The traffic jam has surprised them in the gig van. Four of them go inside, with or without masks, at times. They are three Ecuadorians and one Bulgarian. One of the Americans nervously comments, trying unsuccessfully to express himself well, that “with this the righteous pay,” supposedly for sinners. The Bulgarian, at the wheel, gestures angrily: “Don’t close the roads!” Behind, the eyes of his companions are seen in the semi-darkness composing a tired and condescending look.

Four cars away, Víctor and Rocío, a married couple from Bilbao, have left because they are going to rent an apartment and they wanted to sign with the landlord. With a Biscayan conditional, he complains about the politicians: “If they would all agree, we would be better; not this, some sites are closed, others not €”

When the Ertzainas return to their station, they may find some real hydroalcoholic gel to take on patrol at night. Last week the Labor Inspectorate sent a request to the Basque Government, as a result of a complaint from the Ertzaintza SIPE union, so that “immediately” provides gel to the police. The Viridiol that until now has been giving them “does not fulfill the disinfectant work that it must fulfill to eliminate microorganisms from the skin and prevent their possible transmission from healthy carriers to other individuals,” says the sanction document.

On the A-1, after the cliffs of Pancorbo, at midnight you can see the towns of the province of Burgos on the sides of the road like islands of yellow lights, without any traffic around them. The stillness around the Miranda de Ebro gas station is total. Toñi, the 40-year-old shop assistant, reports on the itinerary to the industrial estate. “But you’re not going to find anyone, huh? Before there was more activity at night. Now at night we only work the essentials“, he warns.

The night is essential, even if you don’t feel like going out. The young ambulance technician Sergio Galindo already said in the Pamplona emergency room: “It is an exceptional moment, and at this time is when we have to give our best.”

Some can’t. If these were other times, this newspaper could have gone to see Toñi’s husband at the polygon to see him work at dawn. “No longer; it’s been in erte since April“, she laments. Toñi’s nightly salary is the only one that enters a house in a town that, before the virus, had a per capita income of 27,055 euros and was one of the richest in the country, according to the study European Urban Audit.

Now “almost everyone in this town is just as bad“says Toñi. The” town “of which he speaks is a city of 35,477 inhabitants so bitten by the virus that the government of Castilla y León has had to confine it twice, the last time, and with judicial endorsement, on October 15 . “And look how lucky you are: we leave one confinement and enter another“, the clerk ironizes.” We are not confined, you can come and buy “

On the way to the south, when the receiver already picks up the Madrid FM, a singular announcement can be heard on the radio, according to which “Plaza Norte 2 is not in a confined area.” All of Majadahonda, its term, is, but not the gigantic and luxurious shopping center. And the same thing happens to Plaza Río 2, next to Manzanares. The government of Isabel Diaz Ayuso, which refuses a perimeter confinement that is not intermittent, closes its territory by basic health areas. It may be a coincidence that these areas do not include large shopping centers.

In the city the night is also only for the essentials. The ambulances that leave the Hospital La Paz, the cars of the private security guards and the trucks of the Department of the Environment, that is, of urban waste, look at each other with the headlights on the sides of the Castellana. Few times as now had the four towers been seen with so few lights in the windows.

Below, In Nuevos Ministerios, with a deafening screech of sheets and compressed air shock absorbers, a garbage truck transfers its cargo from cardboard to a larger one, the two joined at the stern like two caterpillars in intercourse.

A small, combed and friendly young man, very pichi, leads the infernal orchestra by himself, leaning unperturbed at the wheels of the two monsters. His name is Miguel Ángel, he’s 31 years old, and he’s only been wearing a reflective yellow uniform for four months. with the bear and the strawberry tree on the chest. Before I was unemployed; he is now an essential worker.

A colleague appears and the sweeper can stop for a moment. Miguel Ángel is happy and, the truth is, he doesn’t care too much if Ayuso opens or closes the city entirely. “I understand that commerce, business will be involved a lot. After all, Madrid is a cosmopolitan city, which lives off the ordinary citizen, from commerce“, conjecture.

During the bridge of Todos los Santos, with Madrid bordered by the two castles, Madrilenians have concentrated their consumption in their community. In the large shopping malls on the M50 axis at the height of the A6, in one of the areas with the highest purchasing power in the country, the parking lots were full of cars whose owners put bags from Ralph Lauren outlet stores in the back of them. Levi’s, Adolfo Domínguez and Adidas.

This Monday the radios have said that the Madrid government was also confining Las Olivas, the area where the gigantic Plaza 2 mall stands. A call to the concierge of its hypermarket is enough to check how effective the measure is: “If you leave an unconfined area, you can come here, ”he explains. The mall is not confined, just the land around“.