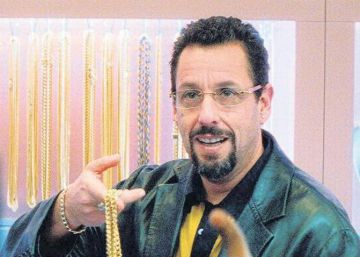 After watching his three most notable recent films, it is clear that the Safdie brothers know how to film the restlessness and provoke the excitement of the spectator, perhaps even the unbridled, unbearable and exciting stress. In Heaven Knows What (2014), unpublished in Spain, accompanying a homeless heroinwoman in a fiction about her own life, with shocking realism and strident electronic music. In Good time (2017), premiered in the official section of the Cannes Film Festival, with the lysergic nighttime odyssey of a man desperate to get money for a bond. In Rough diamonds, which premieres today exclusively on Netflix, with the cruel and almost comical description of another addiction, that of the game, exposed in the vocal stutters, the exasperating lies and the tender flight forward of a jeweled crapula with a terrified, deranged look vendemotos professional who embodies with mastery Adam Sandler.

As always in Ben and Joshua Safdie there is a lot of American cinema of the seventies in their new work. In Heaven Knows What they entwined with Panic in Needle Park, Jerry Schatzberg’s masterpiece. In Good time they did it with Jo, what a night! which is from the eighties but with the spirit of the seventies. And in Rough diamonds, again with Martin Scorsese, this time with that of Bad streets and his cinema of rampage rage, gushing out, with script imbalances but with unusual visual and sound strength; and also with Robert Altman of the unusual and ludopath California Split, and those sequences with four or five characters talking at the same time, with hardly any depth of field, disturbing and touching.

The renowned Iranian photographer Darius Khondji, who debuts with the Safdie, imposes rough, hard-grained textures, illuminating a staging based on Sandler’s close-ups and the use of the telephoto lens in the fascinating street sequences. And the formidable use of sound to finish drilling the spectator’s celebration, Daniel Lopatin’s electronic music, outstanding resources such as the noise of the jewelry door every time it opens, complete an outstanding work in the formal and interpretative, with great debut of supporting actress Julia Fox, and surprising presence of former NBA player Kevin Garnett, who makes himself with unusual demystification.

However, as was also the case with his previous films, the background falls somewhat short. A criminal comedy about greed? Yes, obvious, but perhaps insufficient in this regard, as there are hardly any more subtexts to hold on to, something not essential but advisable. Now, the glorious outcome, countercurrent and suicidal, dry and sharp, shot without underlining, leaves you stunned. Let’s continue following the Safdie.