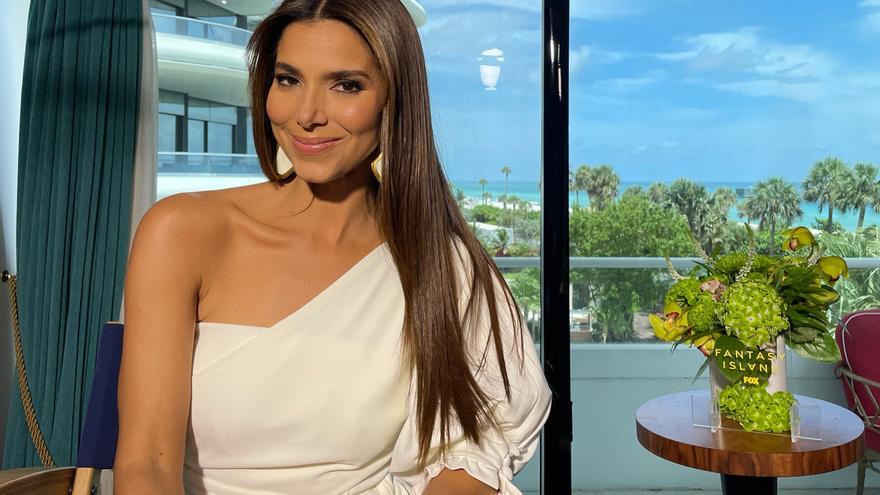 Miami, Aug 3 (EFE) .- The Puerto Rican actress Roselyn Sánchez, who plays in the new version of the series “Fantasy Island” a great-niece of Mr. Roarke, told Efe that, for her, “it It was important to maintain the dignity and the touch of majesty that the late Ricardo Montalbán gave to the main character ”.

The original production began airing in the United States in 1978 and remained on the air until 1984, although its creators assure that some chapter is always happening somewhere in the world.

For this reason, Sánchez thought “very well” and dedicated “a lot of time to building the character that represents a very important moment in the history of Latinos on television.”

The 2021 edition of “Fantasy Island” will premiere on August 10 on Fox.

Recorded entirely in Puerto Rico, it has a cast that includes, in addition to Sánchez, the American artists John Gabriel Rodríguez and Kiara Barnes. The latter is Roarke’s assistant, who in the original version was the character of Tattoo, played by Hervé Villechaize.

In this case, Barnes is an African-American woman who remains on the island after arriving as a woman in her 70s with only a few weeks to live. Transformed into a young woman in her 20s, Elena Roarke’s right hand is called Rubi Akuda and she is the furthest from the original character.

On the contrary, Sánchez did want to bring Elena closer to her famous ancestor. “The Roarkes continue to be portrayed as a mysterious family. Nobody knows if they are the ones who have the magic or if it is the island. It is something that I wanted to be included in this new stage of history, “he said.

When he was building the character, Sánchez wanted to maintain the aura of the Mexican Montalbán (1920-2009) and at the same time give him more “tenderness, compassion and even a little humor”.

“The scriptwriters of the series are women. Most of the episodes were directed by women. The two main characters are women. We had to give her feminine characteristics, but without losing her strength. After a lot of work and many consultations, I am very happy with what we achieved ”, he affirmed.

ON THE ISLAND OF ENCHANTMENT

Unlike the original series, which was shot in studios, 2021’s “Fantasy Island” is a waste of exteriors. The cast and crew spent three months in Puerto Rico, where the recordings were made.

“My country is a wonderful island and it became another character in the series,” said Sánchez, who was born in the capital San Juan on April 2, 1973.

“It is an island where talent flows and it is a paradise. It was very special for me to have done this project there. I can’t say it’s my credit. When the project came to me, it had already been decided that it would be done there. However, I am very proud to help Puerto Rico and its creators, especially audiovisual projects, which need more funding, “he said.

According to the Puerto Rican governor, Pedro Pierluisi, the recordings of the series brought the island 54.7 million dollars and created 418 direct jobs.

FROM MIRACLE TO MIRACLE

For Roselyn Sánchez, the possibility of putting on the shoes of someone as iconic as Montalbán is “more than a dream.” Like the visitors to “The Island of Fantasy”, the actress also has wishes that she would love to make come true, such as “being able to sleep the recommended eight hours” and guaranteeing the permanent health of her family, especially her children Sebella , 9 years old, and Dylan almost 4 years old.

The concept of the series follows the original: every week, for an hour-long episode, visitors to the island come expecting miracles and live experiences that initially recall the saying that “you have to be careful what you wish for”.

But the actress, who has worked on series such as “Without a Trace” and “Devious Maids”, claims to feel so “happy and full, that asking for something would be ungrateful.”

In fact, he emphasizes that “my name is Roselyn Milagros and I feel that everything I have in my life is so good that it is like a miracle. I’m very fortunate”.