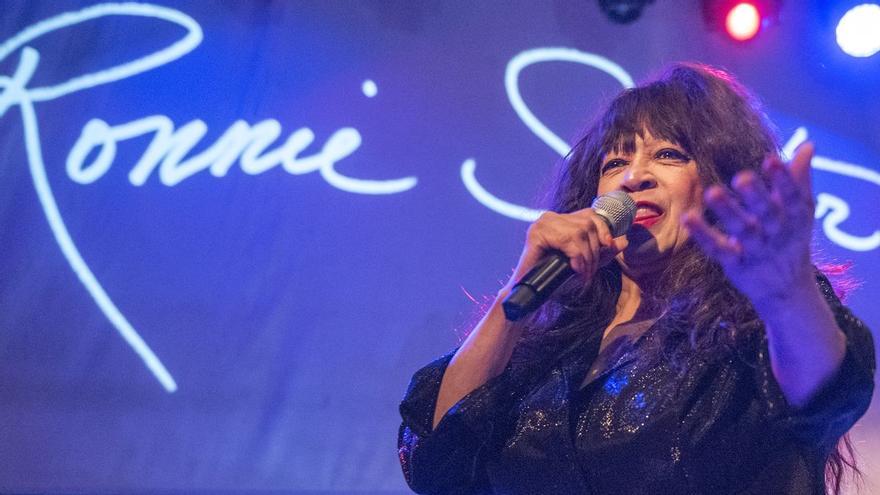 The year 1963 is a good illustration of the seismic movement that occurred in pop music at the beginning of the 1960s. Throughout those twelve months, and just before the Beatles began their invasion of the US, more than half of the songs that reached the US top 20 were performed by female or mixed groups. In an industry dominated by men and obsessed with teenagers, whom the Rock And Roll had become for the first time a full-fledged consumer fringe, young women constituted a target audience who had to be given what they wanted, and those songs performed by female voices -and often Afro-American- seemed to express the concerns and longings -almost always loving- of so many girls trapped in their boring suburban bedrooms.

Ronnie Spector, who died on Wednesday from a Cancer, it was one of the best voices of that generation and one of its most modern representatives. As leader of the Ronettes, the singer, supported by her groupmates -her sister Estelle and her cousin Nedra- became an icon that shattered the classic and domesticated image of adolescent girls of that time based on tight dresses, skyscraper-sized beehive hairstyles, large doses of makeup adorning a face that reflected the diversity of her family origins – African American and Cherokee on her mother’s side, Irish on her father’s side – and a self-confidence that her more modest and virginal contemporaries did not exhibit.

The Ronettes in their heyday. Ronnie is the first from the left.

Spector, born Veronica Yvette Bennett, began singing and dancing with her future squires in the Ronettes and with other members of her family – in addition to several women, there was a cousin – when they were teenagers. They went to dance classes and rehearsed their harmonies with the songs of Frankie Lymon and the Teenagers. After a Show amateur in the famous Apollo Theater from harlem, the group got rid of their male member and two other female cousins. Already in their definitive trio formation, they were signed by the label Colpix, and there they recorded their first songs under the name of Ronnie and the Relatives. Dissatisfied with not achieving any success, the group changed its name to The Ronettes and Estelle made a key call to the very young producer who dominated the New York scene at the time, PhilSpector.

Phil Spector introduced his new female signing in the musical factory that was the Brilliant Building and its surroundings in Broadway, where almost all the pop hits of the time were produced industrially. Working with the pair of composers and lyricists who formed Jeff Barry Y Elie Greenwich, sheltered by the famous ‘wall of sound’ that was the producer’s trademark and boosted by Ronnie’s voice and his particular vibrate, the Ronettes began to invade the Top 40 with hits that would become eternal What be my baby, Baby I Love You or walking in the rain, which would join those of other authors, but always under the supervision of Spector, as (The Best Part of) Breaking Up or the Christmas jewels they recorded for A Christmas Gift for You from Phil Spector (1963), perhaps the best album around these parties that has ever been made. The Ronettes became celebrities, crossed the Atlantic to take London by storm, and had brief romances with musicians like George Harrison (Estelle) or Keith Richards (Ronnie).

In 1968, Ronnie and Phil Spector got married. She could not imagine the hell that awaited her. The producer, a musical genius but a monster in everything else – he died in 2020 while still serving a sentence for murdering another woman – locked her up at home and put barbed wire on her walls. At some point he even took off all her shoes so she couldn’t escape, and often threatened to kill her. She would later say throughout their relationship she was his prisoner and that he could never have control over his career. Despite everything, she continued to make music with him and with some of the musicians with whom she had relationships –John Lennon, George Harrison— until their marriage finally ended in 1974. Litigation over royalties for songs they made together dragged on into the 2000s, and ended with a bad outcome for her and her bandmates.

The singer tried to rebuild her career based on collaborations with musicians like Billy idol Y Bruce Springsteen and the E Street Band, and approaching different sounds of the moment such as the disco music or the punk. He only managed to return punctually to the top of the charts in 1986, thanks to a duet with the singer Eddie Money. But she never again reached the peak she had occupied in the mid-1960s in the midst of that enormous explosion of female artists in which the Ronettes were accompanied by groups such as The Shirelles, The Crystals, Martha and the Vandellas, The Supremes, The Paris Sisters or The Shangri-las, and that produced infinite unforgettable songs. In recent years, Spector has remained musically active, performing live on a regular basis – she was on tour in Spain in 2018 – and publishing more than worthy albums, finally owner of a music that had been taken away from her for so long.