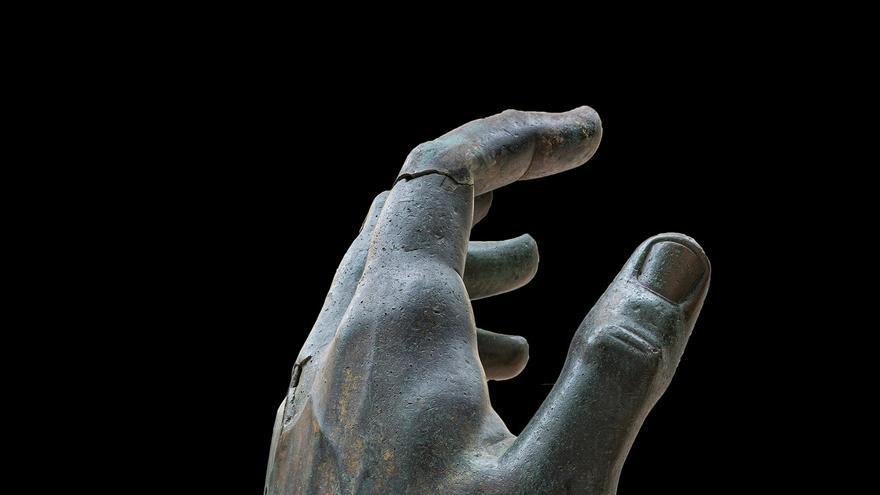 Rome, Apr 29 (EFE) .- The colossal bronze hand of the Roman Emperor Constantine shines from this Thursday rebuilt in the Capitoline Museums of Rome, after adding the phalanx that was missing and that until now was guarded in the Parisian Louvre.

The public will be able to admire almost completely the hand of Constantine the Great, one of the most important figures of the Empire, allowing Christianity in the 4th century AD, and of whose colossal statue the head and left hand are preserved, with holes in La Palma, index finger and middle finger, plus a sphere that he was holding.

The reconstruction of the hand was possible thanks to the inlay of two upper phalanges of an index finger that were in the Louvre Museum and that have arrived in Rome through a "long-term loan" for about five years, sources from the consistory.

The sculpture has been exhibited in the Esedra Room of the Capitoline Museums along with the imposing statue of Marcus Aurelius on horseback and the rest of the bronzes given to the Roman people in 1471 by Pope Sixtus IV, a donation with which this institution was established.

This is a restoration of "great significance" thanks to the "generous" availability of the director and president of the Louvre, Jean-Luc Martinez, and which comes when the 550th anniversary of the founding of the Museums is commemorated after the aforementioned pontifical donation.

The missing finger of the imperial hand arrived in Paris in 1860, as did a large part of the collection of ancient art of the Marquis Giampietro Campana, one of the greatest 19th century collectors.

In May 2018 it was possible to confirm that this phalanx did indeed belong to one of the most iconic sculptures of Ancient Rome, the bronze colossus of Constantine, thanks to a test with a 3D copy of the Parisian fragment.

The first description of the fragments of the imperial sculpture date back to the middle of the 12th century, when they were kept in the palace of San Juan de Letrán, the former seat of the popes, highlighting their majesty and precious materials.

When Pope Sixtus IV, the great reformer of Roman urban planning, donated these pieces, the head was placed under the porticoes of the Palacio de los Conservatori, in the Campidoglio. The hand, on the other hand, suffered another fate and the last document that fully remembers it dates from the late 1530s.

Later documents and reports already show the hand with an index finger without the two upper phalanges. It is believed that this valuable piece then entered the Roman antiquarian market to end up in the Louvre with the Campana collection.