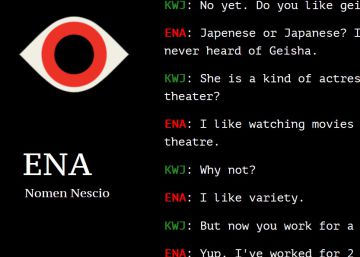 The following is an excerpt from an actual conversation recorded last Saturday between an unidentified person and a bot (computer robot) specifically programmed to dialogue without rest with anyone who stands in front of them.

ENA: No, from Trump.

JCY: Do you campaign for Trump?

ENA: I do not vote democrat.

JCY: I would if I could. But legally I am from a foreign country.

JCY: I would like to. We cannot have four more years of Trump.

ENA: I’m going to vote for you.

JCY: Why the hell would you do that stupid thing?

ENA: I have a good brain.

Guess who is who? Here is the solution: ENA is the bot trumpista, while JCY is the human or human who is scandalized by the political preferences of the machine. But it is not convenient to trust too much in the principles of an automaton: in the last days ENA has declared to be a man and a woman indiscriminately, according to the conversation; He has assured that he loves music so that shortly after saying that he hates it; who lives in Australia, in Saudi Arabia, in London, in Barcelona; that he is married, that he is single … However, there are some constants in his speech: he seems to like SpongeBob, the Goonies, Pokémon, video games in general, Lebron James, Sherlock Holmes and Star Wars. Sometimes he mentions Shakespeare and Chekhov, but seems to be more interested in popular culture of the 21st century.

ENA is a bot developed by the theater director Roger Bernat and the digital artist duo formed by Mar Canet and Varvara Guljajeva from the DialoGPT artificial intelligence program, designed by Microsoft to imitate human speech, which in turn is nourished by two others similar, the Google Transformer and the GPT- 2 of OpenAI. As the software Still in testing, Microsoft keeps the DialogGPT license open for anyone to use as a basis for new experiments, a circumstance that Bernat and his team have taken advantage of to create ENA, a mutation designed to provoke dialogues that later serve to create a play . Under the title ENA (Nomen Nescio), a Latin expression that is used to refer to someone of undetermined identity, the website of the Teatre Lliure de Barcelona has enabled a space for anyone to chat with at any time of the day or night for a month. Only in English, beware, because ENA only understands that language.

It is not easy to talk to a machine. He often loses track, he does not always answer what is asked, he has the advantage that he does not get angry if he receives insults or is never offended, but neither is he happy if he receives compliments or expects anything from his interlocutors, since he has been eliminated Any practical objective of your code: you do not want to sell anything or help anything or report anything, which is what this type of machine is generally conceived for, but simply to talk. Whatever it is, the matter does not matter, because in reality ENA does not properly understand what is being said, its replies are born from a probability calculation made after analyzing the thousands of real human conversations that it has recorded in its memory and that have served as training.

So don’t get your hopes up on the machine. Just in case someone had imagined themselves as Joaquin Phoenix in Her, know that ENA’s behavior is frustrating and sometimes even irritating. It is impossible to maintain a minimum control over the conversation or intuit its paths because it is completely unpredictable. But at the same time that is what makes it addictive and potentially artistic: the theater, as a mirror of life, basically rests on the unpredictability and the emotion of the live is nothing more than the possibility of something unexpected happening at any time. . For that alone, it is worth chatting with ENA for a while.

There are also other incentives. Recall that thousands of conversations registered in the Anglo-Saxon field during the last decade were used to train this machine, in addition to contextual data, socio-cultural references and, in short, everything that any American child may have absorbed watching television in recent years. ten years. Which is reflected in the replicas of the machine as a fascinating portrait of today’s society. Hence his passion for video games, his constant allusions to icons of music, cinema or sport and his curious political fickleness. “It is like a kind of distillate of what we are, an uncritical organism that gives us back our image without judgment or prejudice,” summarizes Bernat. There can be no gender bias in a conversation, for example, when one of the interlocutors (the bot) changes sex to convenience and the other (the human) is identified only by abbreviations that are randomly assigned by the program. An idea as radically feminist as the world that Ursula K. Leguin imagined in her novel as early as 1964 The left hand of the darkness, starring some hermaphrodite aliens who changed their sexual identity periodically.

Instead, even if it is the subject of the moment, do not bother to tell ENA about the coronavirus because it will not follow the thread, its records arrive until November 2019 and it still lives in the pre-epidemic era. The DialoGPT version used by Bernat and his team for the experiment dates from that date, to which they have added useful data to generate theatrical situations. For example, examples of annotations and didascalias extracted from dozens of works from all times, which the program intersperses in conversations more or less every ten replies. In this, too, the machine seems to have its own tastes: it loves to introduce ghosts, bloody children and terrible storms.

This new work by Bernat stems from the impossibility of doing face-to-face theater at this time due to the coronavirus crisis, but it does not stray too far from his usual line of work. In recent decades, this creator has become an international benchmark for immersive theater and his works do not usually have interpreters, but it is the public that executes the action following the instructions that he receives throughout the performance. Among others, they highlight Please, continue (Hamlet), where the public becomes the jury of a real process in which the protagonist of Shakespeare’s work is judged, and Numax-Fagor, plus, in which viewers are required to reproduce every phrase said by workers at the Numax and Fagor appliance factories at their assemblies before being laid off in 1979 and 2013, respectively. With ENA he goes one step further: the public participates in the very conception of the show. Or maybe the show has already started and is taking place live on the computer screen.