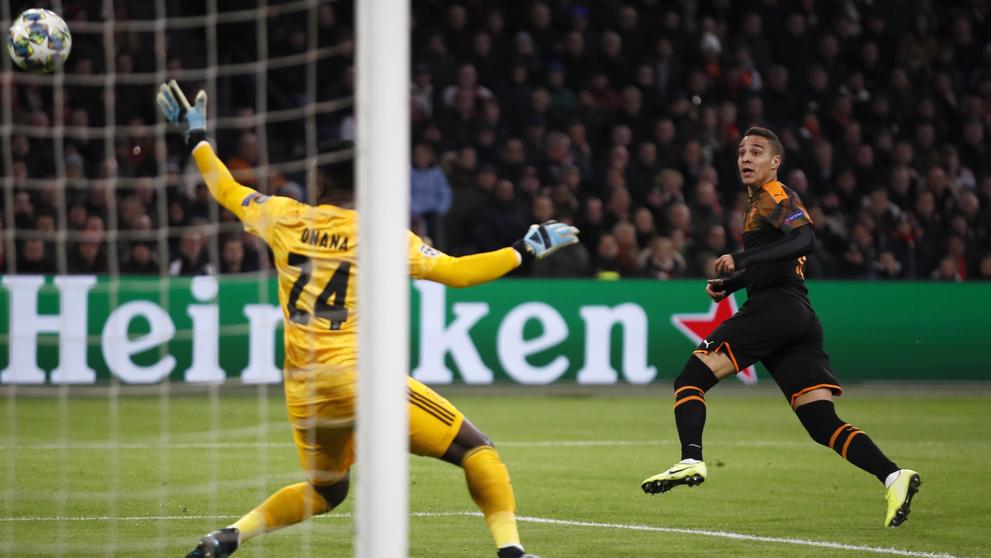 Seven years later, the Valencia CF will be in the round of 16 of the Champions League. A heroic victory in the J
ohan Cruyff Arena against Ajax (0-1) allows the team to Albert Celades Qualify as first group, nothing less than throwing the semifinalist of the previous edition, who was the leader before the game. Rodrigo, with a superb goal, and Doménech, with two prodigious final stops, were the architects of the Valencian classification.

Valencia resisted the siege of Ajax with a superb Jaume Doménech, a great defensive job and a lot of trade, despite the numerous casualties


With everything to decide in group H, the Ajax vigorously, squeezing and imposing a very high pace. Although the first occasionHe had it early Rodrigo in a header in a corner (m. 2) that the goal was not found. He replied the Dutch box with a shot to the side of the goal of Tadic (m.8) and the party went crazy.

News came from London. In the 18th minute, Tammy Abraham ahead of Chelsea (1-0 over Lille), so Valencia was obliged to win. He responded to the challenge in six minutes: in an excellent triangulation, Ferran
towers put a ball from the right to the center of the area to Rodrigo, which controlled and shot at Onana: 0-1 and Valencia was in eighths. The semifinalist of the previous edition claudicaba.

The chances were scarce for him Ajax, the most scorer team in the group (12 goals he had in 5 games). The best arranged Ziyech, in a center-chut (m. 38) that Doménech he deflected with his hand enough that he would not finish off goal Tadic.

The 1-0 of Chelsea that forced Valencia to win served as a spur; at 6 minutes, Rodrigo scored the decisive goal

Chelsea marked the second – goal Azpilicueta– and Valencia seemed to take it as another spur To finish the game. Rodrigo enjoyed an excellent occasion (m. 44) with a shot that saved Onana with your feet, with a stop futsal.

At second time, Ajax took over the control of the ball Almost completely. A lot of domain, but without too many approaches. He threw the clock over and squeezed the fence over the goal of Doménech. Ziyech He had the tie in 67. Van de Beek assisted him and the forward sent out, just before Jaume. Not a minute later was Lang who with a semichilena threw over the crossbar. Ajax was desperate; He resisted Valencia officially.

He endured the Levantine team without haste until 90. Then the virgin appeared in the form of Jaume Doménech, which avoided the draw twice. First in a powerful shot of Lisandro
Martinez from outside the area, and then a shot from Ziyech at 92 minutes. Two prodigious stops that keep Valencia in the Champions League.

The time puts everyone in place; this team does not get tired of working miracles, another one ”


Rodrigo, the architect of the Valencia classification with two goals – one to Ajax and another to Chelsea at Stamford Bridge (0-1) – spoke of a miracle: “Time puts everyone in their place, we made a huge effort against Chelsea, this team does not get tired of working miracles, another one, and keep it up. We lacked to have a little more the ball, we did not give two passes in a row, they are very good, in the first leg the result was misleading (0-3), but another miracle, we will continue like this ”, said the striker.

Win, the magic word in Madrid, by Lolo Sainz

Rosmen avoids the triumph of Tamaraceite in Lanzarote – La Provincia