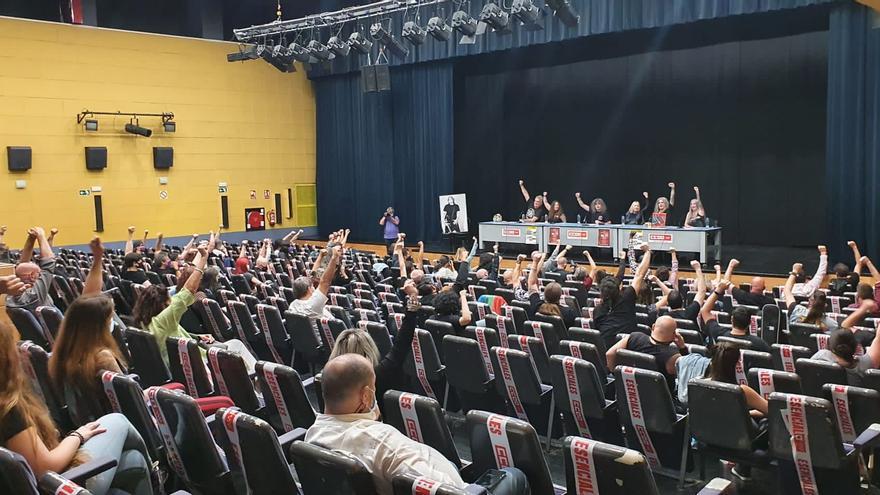 Rock unites against fascism. It does so in a manifesto signed by more than 1,300 musicians, bands, producers, venues, and even rock bars. Fermin Muguruza, Ska-P, La Polla Records, La Vela Puerca, Banda Bassotti, Miguel Ríos, Rozalén or Hamlet are some of the signatories. A group of musicians presented and read the text this Monday at the Marcelino Camacho Auditorium of the Workers’ Commissions in Madrid, with the prospect of creating an association to act and raise awareness about xenophobia, machismo, climate change denial and intolerance of women. new (but old) fascist positions.

Mariano Muniesa de Mariskalrock started the event by explaining that the initiative and the anti-fascist positioning comes because “although it seems that we come from a more cultured and advanced society, when the social movement grows and stands up to power, the powers and the economic elites who are who they handle fascism, they are afraid and they mobilize, they draw strength and try to stop any attempt at social improvement ”. Muniesa considers that rock was born precisely as a cry for freedom, “it was the music that was in the marches for peace, in the movements against the Vietnam War, it was the soundtrack of the hippy movement or the vindication of free sexuality.”

Muniesa recalls that the Beatles refused to perform in Florida before a segregated audience, and thereby, contributed to the change of racist legislation. The musician assures that the construction of democracy cannot be understood without Log, without Asphalt, without Red Baron and without Barricade and “in the face of the advance that fascism seeks to achieve, rock people have to take a step, because fascism advances if it is not fought. So here we are as rockers to fight fascism ”.

The manifesto states: “We belong to a group that knows that the future will be feminist or it will not be because the word that unites us is music, in feminine, we are music.” At the foot of the stage, with the music of Ska-P or Boikot at full blast, with a packed auditorium according to the measures of the COVID protocols, Aurora Beltrán de Tahures Zurdos says that the strange thing is that they had not joined before to demonstrate and leave clear the position of the rockers.

Fernando Madina, singer of Reincidentes, underlines something similar: “Mechanisms and situations that remind us of other times are being reproduced, I think the world of music had never reacted and it is time to position ourselves and wake up. There are a series of racist and sexist and denial situations taking place, that as a rocker that I am, I want mine to react ”. Aurora Beltrán says that they have been trying for many years to raise awareness about the dangers of fascism through songs, but “sometimes people do not listen through what they hear, so we leave the musical, festive and calimocho context, and get serious and firm and saying enough was already a priority ”.

Accessions from Latin America and Europe

“This was born from a tweet by Pablo Iglesias, he put the song Nazis never again Reinci for some statements by Vox that felt bad to the entire left. Óscar Sancho de Lujuria called me, he had to move and write a manifesto. We started looking for more people and in fact, we continue to encourage musicians and whoever wants to join, because the idea is to hold assemblies and continue building, ”says Madina. The promoters have managed to get groups from all over Latin America and Europe to join because, says the singer from Tahures Zurdos, “we have in common the awakening of the new forms of fascism. And that is indeed a pandemic, it is cancer. So we have come and signed so that we do not forget ”.

Elisa C. Martín, former of the Dark Moor group, tells us: “As a woman and a lesbian, as a mother of a future girl, I am here because we have to empower ourselves and stand up to so much shit. It is the moment to put it cane. We are going to try, with our songs, with our presence and in demonstrations, to rise up against so much contempt ”.

The manifesto continues: “We belong to a group that has been criticized, repudiated and marginalized since it was born because we came to tell the truth, to denounce privileges that generate inequality. We came to seek equality, equity, freedom, brotherhood. We denounce those people who, in the words of Metallica, are the “Master of Puppets”, that is, the owners of the puppets and, for that reason, they do not like us. We are the rock tribe and today we want to tell you, we think it is necessary to tell you: we must stop fascism ”.

Madina is proud that for the first time, the rock family has come together to fight together: “Unfortunately, we rockers have not had a union nor have we organized to fight for our rights. So this is an important step ”. The singer of Reincidentes, already on stage, before a devoted audience – fists raised, applause and cheers – says that, as the father of a trans child, he often feels “the impulse to take up the submachine gun in the face of contempt and hatred” , but affirms that that can never be the way.

“Fascism is not going to happen again. They will have to kill us all. They are usurpers of words and ideas that they have always rejected, such as freedom. They will have us in front. Nazis never again ”, says the singer. And as the rockers affirm and end in their manifesto: “We were born committed and committed to the human being, we never go out of style. Today, we ask you to meditate well. Much is at stake. We must make the mask of fascism fall. Do not be fooled by the easy messages that generate inequality claiming privileges. Not pass”.