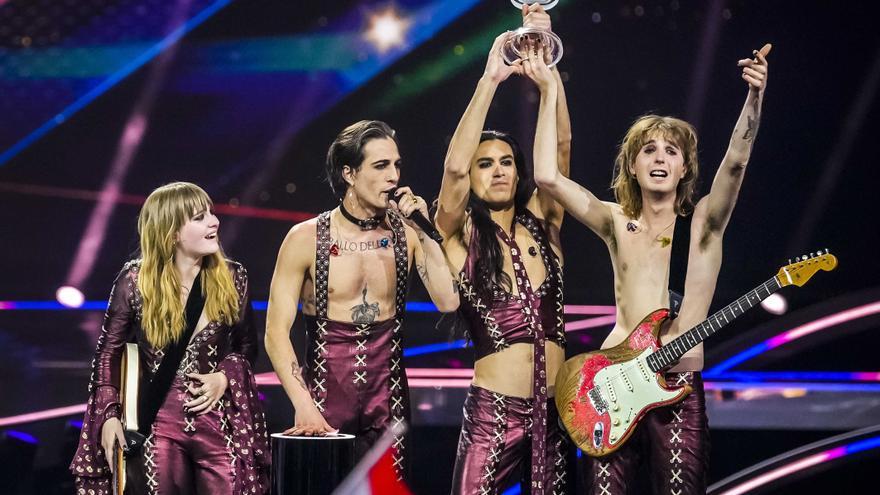 The Italian band Maneskin reached the 65th edition of Eurovision with the aura of the rare rock extravaganza awarded in San Remo, but it was stepping on its stage, setting it on fire and ‘sorpasso’ in betting that has been settled tonight with a victory for the right.

Even with the precedent ‘heavy’ in 2006 of the Finnish Lordi, few would have thought that one day what was cataloged as “European festival of light song” would award a quartet formed in Rome, lover of garage rock by The White Stripes and with the seductive point of Franz Ferdinand.

Italy, which adds with this its third win at Eurovision, He had not won again since 1990 with Toto Cutugno and his song ‘Insieme: 1992’, the year of Azúcar Moreno, in part because he declined to participate between 1994 and 1996 and, above all, between 1998 and 2010. Overall, they already had the San Remo Festival, the original version that inspired Eurovision.

On his return, the country was left out of the ‘top 10’ only on two occasions and he caressed the triumph in another two: in 2011 with the jazz touch of Raphael Gualazzi on piano and again in 2019 with Mahmood.

Of the hard setback that was the cancellation in 2020 of this 65 edition due to the outbreak of the pandemic the host city, Rotterdam, has been compensated with a exciting and top-notch gala in which its prevention protocols have made the coronavirus more of a cumbersome shadow than a persistent protagonist.

For many it will have gone unnoticed even the fact that precisely because of two positive cases detected in their controls they have not acted live but with rehearsal recordings neither last year’s winner, the Dutch Duncan Laurence, nor one of the countries in the contest, Iceland.

These guarantees are what have also allowed some 3,500 people (one fifth of the total capacity) have attended the show at the Ahoy Rotterdam after being tested in the hours before.

That there was a desire to dance and shake off the leaden sensations of confinements has been noticed in the clearing predominance of dynamic songs from the start, with the Cypriot Elena Tsagrinou, and to the end with Senhit in collaboration with the famous American rapper FloRida on behalf of San Marino.

In between, some very exciting ballads, like the Swiss Gjon’s Tears (‘Tout l’Univers’) or the Bulgarian Victoria (‘Growing Up Is Getting Old’). By dint of vocal virtuosity Spanish Blas Cantó has tried to stand out in that group with ‘I’m going to stay’, a dedication to his grandmother who died covid-19 which he has turned into a dialogue with a 6 meter diameter moon.

In general terms it has been one of the galas with best scenographic and musical establishment of history, something that has also been measured by its stylistic variety. In fact, with a theme between ‘soul’ and ‘blues’, Portugal has achieved its best result so far this century (not counting Salvador Sobral), number 12.

In parallel, Finnish Blind Channel have set fire with ‘nu metal’, Russia’s Manizha has dyed folkloric clichés with urban rhythms and an empowering message, Belgians Hooverphonic have brought some embers of their trip hop and Ukrainians Go_A have mounted an electronic folk rave.

Right behind that outburst, in position number 20, the one that was one of the top startup favorites, French Barbara Pravi, barely lit by a spotlight behind her, with the simplest of costumes, her hands in the air and her liquid gaze, with a voice to warm hearts and the strength not to fear showing vulnerability.

According to the bets of the last week, on their way to victory only the possible coup d’état of the Italians Maneskin stood in the way, who have come out in twenty-fourth place prepared to burn their rock discharge with challenging bass lines, like the walk of its charismatic and shirtless vocalist, the Roman Damiano David.

When the votes have come, surprisingly the Spanish jury has not awarded any points to its transalpine neighbors, but yes to France, which has received the highest rating. In addition, it has awarded points to: Switzerland (10), Malta (8), Iceland (7), Cyprus (6) Portugal (5), Bulgaria (4), Israel (3), Lithuania (2) and Ukraine (1) .

There has been no correspondence in the return of votes for Blas Cantó, who has finished in the third to last place by scratching something only from the United Kingdom (2) and Bulgaria (4) and nothing from the viewers. The Murcian has not wanted to make statements after the result, with which Spain accumulates its sixth consecutive festival in the queue.

At the top, the race for the jury’s points has been a matter of France and Switzerland, in a succession of constant overtaking and curious situations, as the latter gave 12 points to its main rival, but the former only returned 7.

At the end of this first phase, the situation was Switzerland (267) and France (248). Afterwards, the system of giving each country all the points of the European spectators at once has maintained the suspense until the end, with the sudden reappearance of Italy, which was fourth and apparently lost and that has taken the great turn by monopolizing the highest audience vote, 318 points.