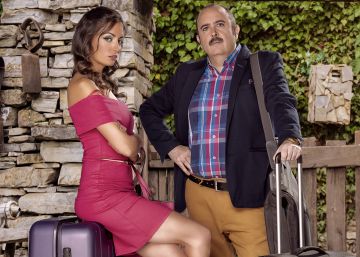 Empty Spain already has its series, they tell us. The village, available since last year on Amazon Prime Video, it is being broadcast on open by Telecinco. Do not expect, however, to find here allegations against the abandonment of rural areas. The few natives of the fictional town of Soriano in Peñafría seem resigned to their eventual evaporation, with no desire to point out guilty or urgency to seek possible solutions.

Overnight, Peñafría multiplies its population with a dozen fugitives from the city, summoned by a couple of hippies mindless, perhaps the most unlikely characters of a heterogeneous troop that encompasses scumbags, the victims of an eviction, a rocker looking for inspiration, a terminally ill, a hipster of cartoon and the atomic couple formed by the character of Carlos Areces, a corrupt brick businessman, and his companion, the trophy wife (She sees herself as a “multifaceted actress”) gloriously embodied by María Hervás.

With extensive chapters, between 60 and 70 minutes, there is room for different frames to flow. It only occasionally falls on the palettes humor, including a visit from the locals to Madrid. An ugly slip that occurs in the second season, when Alberto Caballero’s series could already boast of granting dignity to the rustic, all formidably interpreted, and it is allowed to break stereotypes by portraying the venerable mother of the mayor as a greedy viper.

As for the city, it is enigmatic Echegui, former singer of an urban rock group called Los Apestados. We attribute its short wick to the fact that it has just detoxified, although we do not access the full story until the end of the first season, when the real estate developer tries to set up a festival, Rock in Peñafría, where Jaime Urrutia, Loquillo and Enrique headline Bunbury

I must warn that The village limps in the musical. It has been scratched in the score, there is hardly any diegetic music and it is shocking that the resurrected Sniffers make a rock version of “A people is”, the warning about the dangers of representative democracy that María Ostiz published in 1977. In similar circumstances, any national group would have stepped out by playing the hedonist Rock and roll in the town square, from Tequila.

In Peñafría, the ecovillage promised but the entire population lives a vertiginous year, with the festival, municipal elections, the establishment of a summer camp for obese children, the appearance of an unlikely guru etc. Some have wanted to see there a tribute to the rural world imagined by José Luis Cuerda. And no: just think of a sitcom that runs away from the foreseeable (and even raises euthanasia). Surprise that is not little.