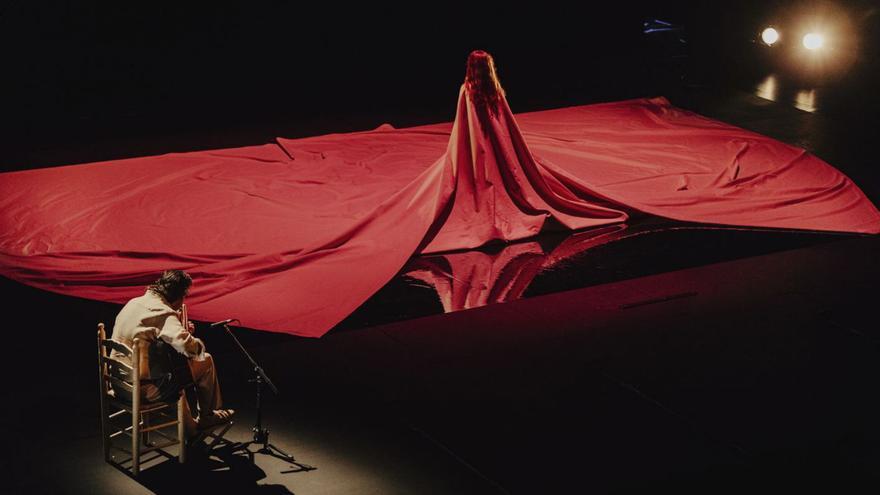 The dance of Rocío Molina, who has just won the Silver Lion at the Venice Biennale, arrives this Saturday at 7:30 p.m. at the Cuyás Theater, and she does so with her proposal Inicio (Uno). The 2010 National Dance Award winner, along with one of the best guitarists in our country, Rafael Riqueni, stars in this show conceived as the first part of a trilogy on dance and guitar in which she shows a facet of hers little known until now: less technical and conceptual, but also purer.

"I've been trying to pause the movement for a long time to reach a natural depth", explains the bailaora, who considers that "with Riqueni, my dance recovers its nature". "It's like taking a walk back, as if hearing the music for the first time and my body language comes without effort or complication," adds the artist.

The dialogue between both artists tries to discover the essence of what is known and what has been. | | LP/DLP

In this production, Rocío is delicately supported by Rafael's brittle strings, to discover, due to the imperative of balance, a movement that stems from extreme attention to subtlety. Thus, under the slow passing of the clouds, pure white and stripped of all artifice, in Inicio (Uno), Molina surrenders to the guitar in an intimate and poetic dialogue, tender and surreal, in which her dance joins in a whole to the touch of Riqueni, as if the music that comes out of the master's hands were born from his body.

The first, this Beginning (One), revolves around the exclusive touch of the master Riqueni and recovers the premature experience of belonging to the whole and of spontaneous surrender to movement without the exercise of control. It is, therefore, the beginning, after a creative crisis, of a desired journey back to the origin of the creative act.

It is followed by Al fondo riela (The other of the one), where Yerai Cortés and Eduardo Trasierra enter into an exploratory dialogue on the polyphonic possibilities of the instrument, incorporating the contrapuntal, harmonic, rhythmic resources... that the duet allows to the preceding solitary study.

The artist Rocío Molina in an individual exercise. | | LP/DLP

To culminate, the project includes a recently premiered third piece, Vuelta a uno, in which the instrument enters into a relationship with cante, the last vertex of the traditional pyramid.

Although they are consecutively related, they are three independent shows, which, however, are strengthened as a whole, as they are the result of a single investigation into the instrument and its relationship with the essential elements of the flamenco triangle. In this way, he aspires to compose a Genesis in three steps that heralds the arrival at the elementary structure of flamenco.

All of them appeal to a reality of original and past condition, submerged in its beginnings and responding to that claim in the execution requires rediscovering its singularity in a space always to be explored.

In parallel, it is about silencing the noise to recover the sound, silencing what is known so that the movement resurfaces authentically. Because essence means "what is", "what is already there".