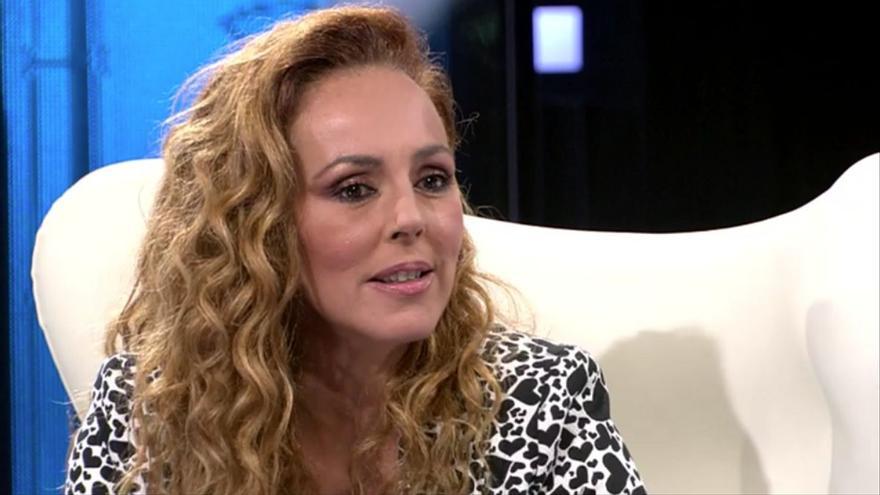 Because in the end it was about that: that the docuseries be a useful tool for reopening the case of alleged harassment and psychological abuse to which the former civil guard would have subjected Rocío Carrasco for years, and that in November 2018 the Provincial Court of Madrid filed away because it did not appreciate evidence of crime or the existence of injuries was proven. "We are going to request that the case be reopened, with all the testimonies that have come out now [en la serie] and others that I did not explain at the time because I thought they were not worth it. I want to be given the opportunity to be heard in the courtroom ”, he stated, exhaustively, the daughter of the Biggest, on a night of high emotional voltage, in which the terrifying ghosts of the past reappeared (the mistreatment, the non-relationship, surely irreversible, with his children Rocío and David, the disagreements with his maternal family), but also certain exciting green shoots: “I feel at peace with myself, largely liberated, I feel heard, and believed by people. It's the beginning of a new life without fear”, He assured with some sparkle in his eyes.

And through that new life passes what was, without a doubt, the great effect of the evening: the announcement, and that the Mohedano, great antagonists of Rocío in this heinous and petty drama, of a new docuserie in Telecinco, scheduled for autumn, in which the 'celebrity' and former presenter will openly address all problems you have had with your maternal family (Amador and Gloria Mohedano, Rosa Benito and José Antonio Rodríguez), as well as with José Ortega Cano and his brothers Gloria Camila and José Fernando. For a moment, an uncomfortable sensation floated, as if the dramatic story of sexist violence of 'Rocío, tell the truth to stay alive' resulted in a opportunistic 'exploit' about family miseries with the unmistakable stamp of the Mediaset house, but the shadow vanished with the providential intervention of the journalist and PhD in Communication Ana Bernal-Triviño: “The media violence of Antonio David towards Rocío would not have been possible without the media violence of the Mohedano”. Final point.

The long-awaited interview with Rocío Carrasco, second live after the one she offered in the same studios on April 21, took up long hours of Telecinco's programming, since it began at 10 p.m. and ended after 2.30 p.m. More than four and a half hours of interview that maintained the inalienable sense of the 'show' of the Mediaset chain, although surely more restrained than on previous occasions. Rocío arrived at the Fuencarral studios in a dark gray Ford Mondeo while on a rooftop Gjon's Tears, Swiss representative in Eurovision, performed live the super-hymn 'Tout l'univers'. That was not the thing, because Rocío, dressed in a suit jacket printed with small black hearts and a fuchsia blouse, elegant, with a safe step, entered the studio while it was ringing. a willful, but without claw, version of the classic 'Como una ola' by Blas Cantó. The unusual Eurovision night was completed with the live entry, through Zoom, of Barbara pravi, French representative with the great 'Voilà', another of the hymns that have ended up being an indivisible soundtrack for the docuserie.

This has been the exciting entry of Rocío Carrasco on set #DewFollowViva pic.twitter.com/SU9mLqw4Wv

Beyond the insurmountable blow of effect of the announcement of the new docuseries on the Mohedanos, which promises telluric emotions, the moment of greatest impact of the interview did not come from Rocío herself, who could already contribute little to the irreparable vital tear of the 13 previous episodes, but of Marieta, a friend of hers from school who connected with the program to relate her devastating personal situation due to the mistreatment. "I know that we will not be the same again but, first of all, Rocío, thank you very much. You have opened the most painful closet: that of shame and guilt," said Marieta from an uncertain point "in the forest", away from everything and of all, in a testimony that broke the heart. There was also time for the intervention, through a recorded video, of policies such as Irene Montero or Irene Lastra, or public figures such as Lara Dibildos, Carme Chaparro, Lucía Etxebarria and Itziar Castro, thanking their courage and highlighting the help that her testimony provided to so many battered women.

DEW IS NOT ALONE pic.twitter.com/mMF1AejW4f

The docuseries on the Mohedanos promises to reach milestones of family rot like 'Succession', since the maternal branch of the family has been clearly marked in favor of Antonio David Flores; and it seems that there are strange moves derived from the inheritance of Rocío Jurado. The interview echoed the mass and tribute that took place in Chipiona on Sunday, in memory of the 15 years since the death of La Jurado, which was attended by both the Mohedano and Ortega Cano and Rocío Flores, but not Rociíto. There, just at a time when his daughter appeared on the screen, Rocío Carrasco seemed to collapse. "Much to my regret, and unfortunately, I see my daughter and she tells me that she is the same person she was on July 27, 2012," he said in relation to the day that Rocío Flores attacked her mother at her home in La Valdelagua urbanization, on the outskirts of Madrid, and that was the trigger that they never spoke to each other again. "I try not to see my daughter's interventions because it doesn't do me any good. They don't give me peace of mind, "she declared, visibly affected.

But the green shoots, as we said before, are there. And the day after the tribute to La Jurado, her daughter Rocío took an “unthinkable step” and, after 15 years without visiting Chipiona, she overcame her personal traumas and visited the cemetery to leave some white flowers on his mother's grave in the company of his cousins. “I was not capable, I was blocked. My mind was paralyzed, I couldn't face that, "said Rocío, who assured that she felt ready, at least in principle, to go back to work after years of paralyzing 'shock' from the mistreatment. "The only person responsible for my emotional situation is and has been Antonio David Flores," Rocío snapped at one point, in which perhaps it was the only mention of her ex-husband with his name and surname in the entire series and derivatives. That "being", that "unnameable", as it has been called repeatedly.

"I am very proud of you," said Ana Bernal-Triviño as the culmination of the interview. It was a personal opinion, but it was perceived as a general feeling towards a gesture, that of Rocío Carrasco, of extreme courage and unrepeatable social value.