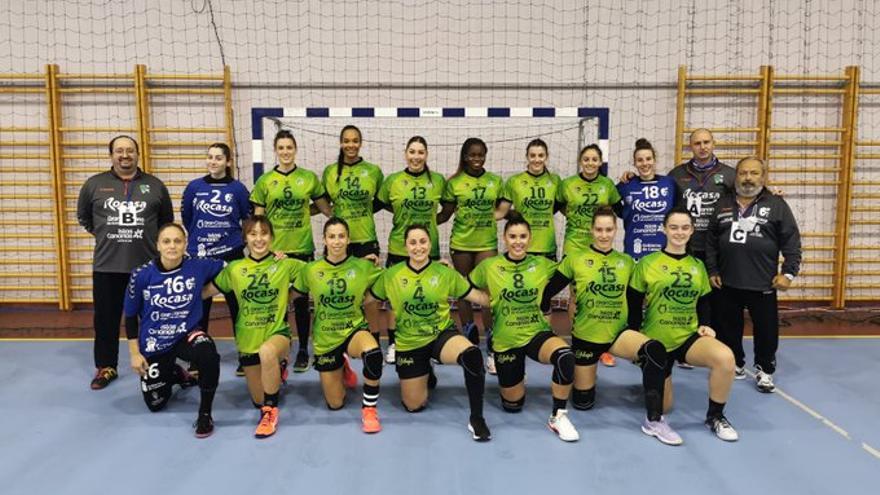 European victory of Rocasa Gran Canaria. Carlos Herrera’s players defeated Bosnian team HZRK Grude in the first leg of the EHF European Cup round of 16 in a very serious match. The Teldenses were patient and in the second half they finished taking this first stake while waiting to complete the pass in the return.

The Teldenses were the dominators from start to finish. Already in the first half they set the pace of the match despite the Bosnian attempts to equalize the match, leaving their best version and the final judgment of victory for the second half.

The opening of the scoreboard came in charge of María Gómez after a couple of attempts by both teams to open the can. The Bosnian defense was very orderly, thus avoiding frank shots both from the sides and from the center. Soon it changed the third in the electronic and the HZRK Grude placed its first advantage. Meanwhile, Rocasa still had a hard time attacking.

You had to work hard each attack to get oil and also outperform a Vujisic that was very concentrated under the sticks. However, those of Carlos Herrera were entering into dynamics and began to find spaces from the sides, forcing the Balkan team to stop the crash (2-6).

After the time-out, Grude’s team regained some place in the game. From Petkovic’s hands they began to feel more comfortable and broke a set that seemed to have done them a lot of damage. In that sense, the lack of success of the Teldenses to maintain their advantage was another of the circumstances by which everything was equalized so quickly.

With a quick response, the Rocasa returned to the point where it had left it before the timeout. Although, yes, HZRK Grude recovered enough ground to leave us a very balanced game for now (8-10).

Another fantastic stretch of the island team, taking advantage of their numerical superiority at that time, gave them a new option to escape. As soon as they were able to find their way to the goal and stopped the attacks of their rival, Rocasa began to move with more ease and that translated into goals that were key to continue marking territory in the match.

With that script came the break. After solving a difficult moment with HZRK Grude wanting to get into the match, the Gran Canaria took advantage of their chances and stretched out again to go to the changing rooms with a favorable partial score that they had won (10-15).

The passage through the changing rooms did not change the game much, as the Bosnian team continued to push in search of reducing distances and Rocasa worked to expand their advantage. At that moment, there was an exchange of blows in the form of goals that fueled the clash considerably. Despite this, Carlos Herrera’s players did not give in and maintained control of the game.

A new numerical superiority was a new turning point for the match because, with one more player, the Gran Canaria flew. And literally, because in several counterattacks they put even more land between both squads, something that could mark the clash (15-21).

At that moment it was the turn of the Teldense team to suffer with one less player on the court, but they knew how to more than solve the ballot to protect the advantage they accumulated again at the start of the second half.

With breakneck speed, Rocasa went back down the road to hammer Vujisic’s goal with quick transitions. Then came the best minutes for the islands on both sides of the court: safe in defense and with great confidence to attack, managing to dominate knowing how important the score was (17-26).

The final stage of the match, with the Gran Canaria winning, did not have much history. Despite this, the HZRK Grude did manage to reduce the gap somewhat thinking about the next match, which will be held on the same stage and will mean the final battle for a ticket to the quarterfinals (22-29).

Rocasa has already taken the first step and it will be their turn tomorrow (4:00 pm Canary Island time) to certify their good feelings to keep alive that dream of rewriting their name in the history books of European handball.

Match corresponding to the first leg of the EHF European Cup round of 16, held at the Highschool Sports Hall Grude.

Barcelona – Seville I Copa del Rey: Rakitic: “Our illusion is tremendous; for Bara it is an obligation”

Spanish clubs entered 2,013 million less in two years due to the covid