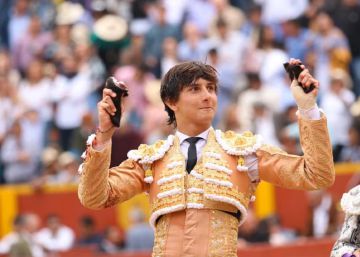 Andrés Roca Rey cut two ears and opened the large door of the Plaza de Acho on his return to the ring in the first run of the Fair of the Lord of Miracles held in Lima, after the injury that forced him to cancel his Spanish season , according to Jaime de Rivero.

The more than bicentennial Plaza de Acho returned to creak with its favorite bullfighter, Roca Rey, the first figure of the world bullfighter and idol of the Peruvian fans, who left on his shoulders, in an afternoon in which he alternated with Enrique Ponce and Juan Serrano Finito of Córdoba, in the cattle fight of El Olivar and La Viña.

The task of the afternoon was that of Roca Rey with the third bull of El Olivar, abanto and short-lived in the first third, who knew how to deal with veronica of good invoice. He left it raw in rods to continue with the take off by chicuelinas, round by the tight and risky, which put the public on their feet.

Before a place delivered, shone with initial statutes that were the best prelude to fundamental bullfighting. With a formidable temper, he took advantage of the strength of the animal to lengthen the onslaught, rounding important series by the right python. On the left there was not the same predisposition. It was a task grounded in courage and temper that culminated with changed passes and other ornaments. He killed a lunge above that collapsed the bull without tiptoe and strolled two undisputed ears.

Bulls La Viña and El Olivar, of correct presentation and kilos that affected their mobility, noble except the first complicated. The second of El Olivar and the fourth of La Viña stood out for their game.

With the sixth of La Viña, Roca Rey demonstrated its fighting quality and the ability to take advantage of an empty well. The animal, noble, but without strength or greed, offered no chance of showing off.

The Peruvian contributed what the bull did not have, and managed to assemble batches of crutches impossible to imagine moments before, some of good invoice, to a standing bull. He failed with the steel, and left in silence a work that the public could not recognize.

Enrique Ponce faced the worst lot. The bull of El Olivar that opened a square, uncertain, peeper and with ideas, warned that it slipped through the right python from the first caps. Without major significance in the initial thirds, he came to measure the crutch. In scoring passes he was defeated again with risk for the right. Therefore, Ponce forged the task by the left python, trying to link the natives to a bull probon and reservón that had no route. Despite this, the Valencian master sought among the pythons, the triumph that the animal did not offer. A low lunge, left everything silent.

The room of La Viña, soon and joyful on the way out, was losing gas and travel until it cracked in the final third. Hungry for triumph, Ponce provided the bull in the media and then tried the fundamental bullfighting, but the animal's soberness prevented its purpose. The horned, soon, but without repetition or delivery, did not allow the great task that the fans expected. He killed with two punctures and hair.

Finito de Córdoba, who reappeared in Acho after several years of absence, had greater possibilities with his first El Olivar iron, which he undertook frankly and traveled from the first sets, taking advantage of it with veronics that were chanted by the public.

On the crutch, the bull showed promptness, nobility and obedience that were not fully exploited by that of Cordoba. He stood out with good batches for the right python that were not properly topped and diminished the momentum of the task. For left python he also repeated, but without clarity or better game. He finished his work with good crutches for bass, which ended with a very low lunge. The fifth of El Olivar, without transmission or tour, gave no apparent play.

The 2019-2020 Big Bull Season of Mexico City started with more than 20,000 spectators on the stretches and with six bulls whistled to the drag, one returned to pens and another as a gift. Julián Hamdan's bad win marked the afternoon and he received the rejection in the form of anger from the public.

Only the bull for the rejoneo of Fernando de la Mora stood out for his bravery. The Mexican José María Hermosillo, who took the alternative, achieved the only appendix of the afternoon in the ordinary fight.

The rejoneador Diego Ventura obtained an ear that protested part of the public with a bull gift of the iron of Brown, and the Spanish Antonio Ferrera and the Mexican Leo Valadez were silenced their respective labors.

Half a century of today, seen by EL PAÍS photographers