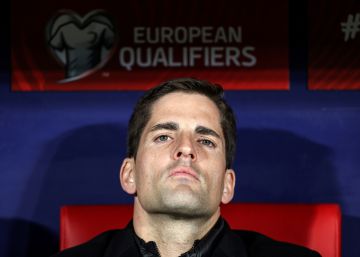 Robert Moreno returns early next week to the benches in Monaco. Yesterday he traveled to the Principality to formalize a contract that links him to the French league team until June 2022, replacing the Portuguese Leonardo Jardim, who has been dismissed twice in eleven months after marching seventh classified in Ligue 1.

“We are very happy to announce the arrival of Robert Moreno. We have a lot of faith in him and his ability to lead the team to success. We welcome AS Monaco, ”said Oleg Petrov, vice president and CEO of the club, in an official statement yesterday.

He also had a few words for the outgoing coach: “On behalf of President Dmitry Rybolovlev, I would like to thank Leonardo Jardim for all his work and successes in recent years. Leonardo and his team have done everything possible to keep the club in Ligue 1 and return it to the rightful place in our championship, ”says the text.

The demands of Monaco are very high since he won the League and reached the Champions League semifinals with Jardim himself. The challenge seduces Moreno, who has rejected different offers since leaving the Spanish team after the dispute with Luis Enrique. He did not accept, for example, an offer to be a coach of Ecuador because his interest was to lead a team with aspirations in a great league like that of France.

Moreno, 42, was a Spanish coach from June to November when he replaced Luis Enrique. Both shared equipment, the Asturian as coach and the Catalan as assistant, in Roma, Celta and also in FC Barcelona, ​​club with which they got the triplet in 2015 after winning the Champions in Berlin.

Moreno assumed the direction of Spain before the match against Malta – 0-2 in Valletta – for the illness of Luis Enrique’s daughter and was the coach for 237 days and nine games, settled with seven wins and two draws, balance that certified the team classification for the next Eurocup. At the end of the match against Romania, played in the Wanda Metropolitano, Moreno canceled the subsequent press conference after knowing that he would not continue as a coach despite the 5-0. The silence of the day later contrasted with the press conference of the previous day, when there were already doubts about its continuity, in which he stated that he was putting a 10.

The situation caused a bitter confrontation between Moreno and Luis Enrique. The Spaniard returned in November to the position of coach without his partner – it was assumed that with his return the Catalan would also recover the function of second coach – to understand that he had played dirty in his absence: “Robert Moreno was disloyal, the excessive ambition is a great defect, ”said Luis Enrique. “The only one responsible for Robert Moreno not being in me staff It’s me. It is not the president, Luis Rubiales, nor the sports director, Molina, much less the Federation. It’s me, ”the Spaniard settled when he returned to the bench after losing his daughter Xana in August.

“If I had not followed, Luis Enrique would not be a coach,” Moreno replied, after saying he did not know the reasons why the Asturian coach had dispensed with his services for La Roja. The former selector considered that he had been attacked in a “personal and unfair” way.