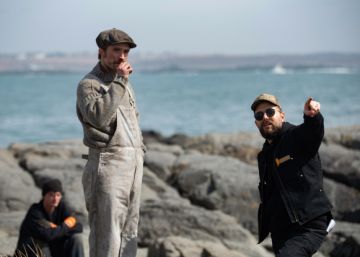 How the actor says Robert Pattinson,, Anyone that have been seen The witch (2015) will be convinced that the director, Robert Eggers, is a rare guy. "In reality he is a most pleasant person," says the interpreter. “As soon as I saw his work, I knew that I would love to work with him,” he agrees. Willem Dafoe. They are the protagonists of the new film rarity that is The lighthouse, a film that overwhelmed the Cannes festival, winning the critics' prize, and now enjoying a BAFTA candidacy and telling the story of two fareros in the 19th century abandoned on a small islet in New England. This movie, his second, does very little to change Eggers' weird reputation. "Rare? Maybe, but I don't believe it. It is true that I have other interests. I like mythology and religion, folk tales and fairy tales. Cults and witchcraft. And almost all those who have influenced me are dead. But outside of my study, of my books of [WILLIAM]Blake, I also connect with the world around me, ”a filmmaker who seems most out of the cast of Son of AnarchyThat of the film school.

Eggers, 36, never set foot in a school like that. But despite his peculiar filmography, he grew up "like any other American kid" on a diet based on Star wars, Disney and Spielberg. His mother taught him and his brother Max to read with Stanislavski, but the first time Robert realized that cinema was made by people like him, he was six years old with The return of the Jedi. Then i would see Erasing head Y The city of lost children and it was in New York, the place where he escaped from his native New Hampshire, where he discovered that the real school was to watch it all: 10, up to 20 movies a day, and learn from the best. "I keep doing it," he says. “I learn more by revisiting Miklós Jancsó's long shots than in one of The Avengers"

Aroma of Poe and Melville

With a slight stutter he apologizes for his pedantry, although he reaffirms his tastes. The lighthouse It smells like Edgar Allan Poe and Herman Melville. But what shaped history more was a thorough historical investigation, in order to recreate a past time with great attention to detail, as Dafoe says, and precisely able to connect with the public. “To sound even more egomaniac, I will quote that Jung disciple, Marie-Louise Van Franz, who predicted that Hans Christian Andersen's stories would not be as popular as those of the Grimm brothers because they were too old, too Victorian. I don't know what my story of two wanderers has to do with the Grimm but I hope to be more like those brothers, ”he explains.

Pattison admits that he had his moments of doubt in the face of the madness that is The lighthouse, shot in black and white, on film, with a 1.19: 1 format (more square than usual) and with old cameras from the beginning of the cinematograph. If to that a filming in a lighthouse of Nova Scotia is added under the inclemencies of a time that changed every 20 minutes, the disaster was quite feasible.

Eggers, who made clear the technical stipulations on the first page of the script, admits that there was some fun in all this, but nothing was capricious. He followed his own aesthetic vision. “I admire the work of [el director de fotografía] Goat Lubezki. Who does not? But he is in love with Alexa 65, the digital realism of his images, while I like to see reality through a dirty window. ”

Superstitious and scared, he prefers not to talk about the cinema that awaits him. Dafoe confirms that they will work together again in The northman with Anya Taylor-Joy, the actress who introduced herself to the world with The witch.

Superstitious and scared, he prefers not to talk about the cinema that awaits him. Dafoe is the one who confirms that they will work together again in The northman with Anya Taylor-Joy, the actress who introduced herself to the world with The witch (2015). What seems parked is the project to revisit Nosferatu, the silent film classic that he would like to turn into a short story to separate it from Murnau's original, from the work of Bram Stoker and, of course, from Herzog's version. "This project is going to be difficult," the unstoppable filmmaker confesses.