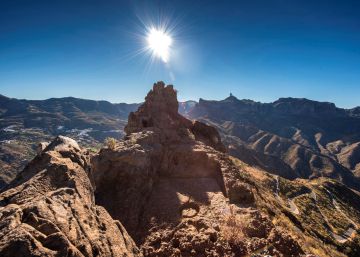 The Canarian culture and its aboriginal heritage today have made a substantial leap in its international recognition. At a meeting in Azerbaijan, Baku, UNESCO has declared world Heritage to the cultural landscape of the Risco Caído and the Sacred Mountain Spaces of Gran Canaria, an architectural and landscape set located on the summits of the island, a fundamental place to understand the culture of the Canarian aborigines, an isolated town for fifteen centuries.

A cultural landscape, for UNESCO, is a joint work between nature and human beings. Nature created this impressive space of 18,000 hectares in the volcanic caldera of Tejeda that Miguel de Unamuno described as a "petrified tempest" and where huge rocks stand out, such as the Nublo, the highest point of the island, and Bentayga, an open-air ceremonial space of aboriginal culture. And the Berbers came around the first century of this era to the island, from North Africa, probably banished, according to some historians. Over time, troglodytes formed in this area in natural caves and other artificial ones that were built by excavating the volcanic tuff; in an ideal place for the observation of the sky, fundamental in the aboriginal cosmogonía.

In that area there are very clear remnants of a subdued culture, decimated and forced to mix after the Castilian conquest of the islands, from the fifteenth century. There are inscriptions in lyrical-Berber or rock carvings, and remains of subsistence activities carried out by the aborigines, as alpendres to put the goats, places to store the grain or terraces of land to cultivate in height.

As a prominent space of the cultural landscape is the sacred complex of Risco Caído, in the municipality of Artenara, discovered in 1996 by the archaeologist Julio Cuenca. In one of its caves there is an impressive almogarén, place for the practice of religious rituals. Despite not having metal instruments, the Canarian aborigines built this interior space with a circular base and a dome five meters high. It has a light input that probably served as an astronomical marker to determine the seasons and organize harvests. On its walls, sometimes illuminated by the light from outside, there are several inscriptions with inverted triangles of a pubic shape that symbolize fertility.

"To build this temple, it took specialists, people with knowledge of geometry, architecture or materials," affirms EL PAÍS José de León, Doctor in History and Inspector of Historical Heritage of the Cabildo de Gran Canaria. De León highlights "the symbolic and abstract knowledge" and the technical sophistication of a people that was made in isolation. "Archeology is opening new horizons about what this culture was," he explains. "The idea that we had was very conditioned by the chroniclers of the time, very important, but mediated by a contemporary observation of the aborigines in a terminal stage". For De León, this recognition "is to put Canarian aboriginal culture at the level of other aboriginal island cultures, such as those of Hawaii or Easter Island."

Hispanized islands, the remoteness of this area with respect to the new urban settlements allowed many of these cultural elements to remain alive, such as habitat in the caves or pastoralism in transhumance, depending on where the grass springs. Or handmade clay pottery. Or knowledge about the territory and plants in the area. "This powerful and exceptional aboriginal culture remains to a great extent to this day," says De León.

For the president of the Cabildo de Gran Canaria, Antonio Morales, the recognition of UNESCO "reinforces a sense of pride and belonging to a legacy, but makes us responsible for further research and protection". For Morales, these types of enclaves also promote new economic activities in the rural areas of Gran Canaria, with alternative tourism to the traditional and massive, sun and beach. "Although it has to be controlled and of quality. One of the commitments of this recognition is to preserve the heritage ".