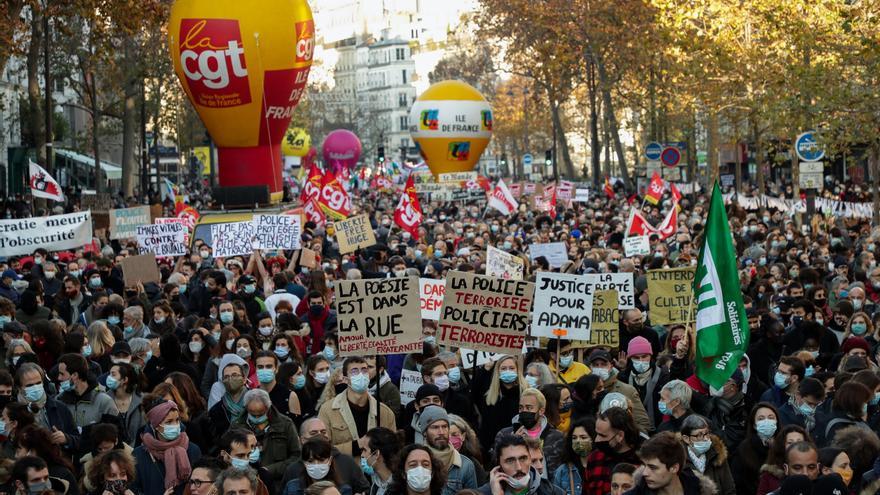 The controversial law that seeks to limit in France the dissemination of images of the forces of order has been received this Saturday with a new large demonstration against it that has ended with riots in the streets. The protest in Paris, the second in a week, started from the central Place de la République to Bastille, but the call had spread to other cities in the country and has gathered thousands of people.

The altercations took place in the capital upon their arrival in Bastille, with the destruction of urban material by some hooded men and the launching of tear gas by the Police to try to contain them. The appeal was promoted by trade unions, press associations, human rights organizations and even by the “yellow vests”, in a joint note that warned that, if it goes ahead, France runs the risk of integrating the list of countries that violate freedom of the press.

In the crosshairs of that bill, approved this week in first reading by the National Assembly before continuing its proceedings in the Senate in January, is Article 24, which sanctions up to one year in prison and a fine of 45,000 euros the dissemination of images of security agents with the intention of damaging them. “It promotes a police impunity that is already quite present with a government that does not care about the means to achieve its objective of restoring order,” Dominic Leroy, an audiovisual technician and “yellow vest” who has participated in the protest, told Efe. Parisian.

Its members were mostly young, with posters such as “Save lives, film the policemen” or images of the latest violent performance that has provoked public anger, that of the attack on a black music producer, Michel Zecler, in a control in the past Saturday for not wearing a mask. “It is important that we fight for our freedoms. If the law is passed, it will be a step backwards. The focus should not be on the protection of the police,” says Iana, a 17-year-old student for whom this was her first demonstration.

Prime Minister Jean Castex this week proposed that an independent commission be tasked with examining and rewriting the controversial article, but has had to backtrack and leave it exclusively in the hands of Parliament again in the face of criticism from both houses. .

The outcry against the forces of order also led this Friday to the president, Emmanuel Macron, trying to stop it with a broad message on social networks in which he admitted that the images of the police action against the producer are “unacceptable.” At the same time, the Head of State asked his Executive to send him “quickly proposals to reaffirm the bond of trust that should naturally exist between the French and those who protect them.”