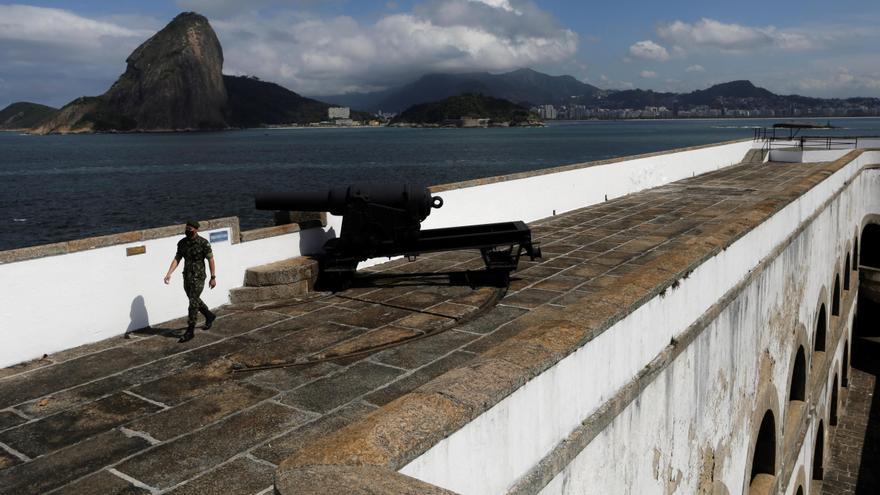 Rio de Janeiro, Aug 7 (EFE) .- Rio de Janeiro, whose landscapes between the mountains and the sea are considered World Heritage, strives so that two of its colonial fortifications, built by order of King Felipe II of Spain, are also inscribed in the select list of Unesco.

In the event that the Brazilian bid for 19 of its more than 500 fortifications, including Santa Cruz da Barra and Sao Joao, receive Unesco approval and are inscribed as World Heritage properties, Rio de Janeiro will have its name included in the list for the fourth time in less than ten years.

First they were the Cariocas Landscapes between the Mountain and the Sea, in 2012; then the Archaeological Site of the Muelle del Valongo (the port through which Rio received more than a million African slaves), in 2017, and the garden “of the modern tropical movement” of the Roberto Burle Marx Site on July 27.

“Rio is going through a historic moment with so much recognition from UNESCO in such a short time,” Spanish architect José Antonio Hoyuela Jayo, a consultant to Unesco and the Brazilian National Historical Heritage Institute (Iphan), for Cariocas Landscapes told Efe between 2017 and 2020.

“Brazil already has 23 places inscribed on the Unesco World Heritage list, the majority (15) in the category of Cultural Heritage. And among all these places we can highlight Rio de Janeiro, the first large metropolitan area declared world heritage. for its cultural landscape in the world, “added the member of the International Council of Monuments and Sites (Icomos, Unesco’s advisory body) in Brazil.

The candidacy of the Set of Fortifications, made up of 19 forts in 10 states of the country, from Amapá (north) to Santa Catarina (south), in which the country has been working since 2014, was included in the Unesco Indicative List last February. , step prior to its possible declaration as World Heritage.

The chosen forts are the most outstanding defensive constructions, of universal and exceptional value, and the best preserved, that Brazil used to define its maritime and river borders during the colonial era.

Some of these military buildings, with their sets of cannons and observation towers, are already part of the urban landscape, such as Santa María or Montserrat in Salvador or Santo Amaro in Santos.

The two fortresses in Rio de Janeiro, which had crossfire to control the entrance to Guanabara Bay and defend the city from French invasions, retain part of their original structures, as well as their military use.

“After the latest successes, Brazil promotes the candidacy of the Fortifications. The criteria for their inscription are based on the strategy of territorial, urban and landscape occupation, and on the definition of national geopolitics, among the Tordesillas treaties (1494) and San Ildefonso (1778) “, Hoyuela explained.

“They are also based on the interaction between the various cultures that participated in the process: Portuguese, Spanish, French, English and Dutch; but also the peoples that somehow suffered cultural, social and economic influences and interactions during the process, such as the indigenous and African cultures mainly, “added the specialist.

Hoyuela recalled that 10 of the 19 chosen forts were initially built or founded by engineers under the orders of Spain during the period of the Iberian Union (1580-1640), in which Portugal and Spain had the same crown, especially during the reign of Felipe III of Spain (Felipe II of Portugal, 1598-1621).

“Engineers such as Bautista Antonelli, Gaspar Samperes, Francisco Frias da Mezquita or Tiburzio Spanochi, under the command of the” felipes “(Felipe II, III and IV of Spain), laid the foundations of the fortification systems in Brazil,” he said.

“The two forts in Rio de Janeiro were signed by Felipe II in Madrid after receiving a report from Bautista Antonelli and at the request of Salvador Correia de Sa, governor of the Captaincy,” he added.

The Unesco consultant recalled that several of the forts, such as Nossa Senhora de Montserrat, Santa María, Sao Felipe or Santiago, refer to names, Marian devotions or Spanish saints, such as the Virgin of Pilar and Candelaria.

“Even the image of Santa Bárbara, a devotion of the Spanish artillery, located in the chapel at the entrance of the Santa Cruz fort, was rescued from a shipwreck in 1595 and taken to that place in the middle of the Iberian Union period” , He said. Carlos A. Moreno