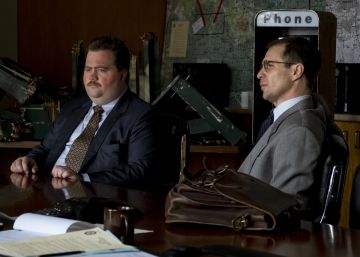 That it is becoming a rarity to tell a story perfectly, looking exclusively at the character, seems an annoying sign of the times. At a time when granting an identifiable style to each work seems a mandatory toll, filmmakers like Clint eastwood, just a handful, storytellers in the classical way, act as protectors of essences in danger of extinction. In Richard Jewell, his last job as a director, based on real facts, he is aware of the place he must occupy, that of the narrator of facts greater than his own life: that of a simple man run over by circumstances; that of a human being of enormous complexity, who goes from hero to villain in a heartbeat because of the contradictions of society.

The 1996 Atlanta Olympics. A private security guard of peculiar personality, physique and attitude avoids a terrorist massacre thanks to his diligence. The heroism of Juan Nobody. Shortly after, after an accumulation of circumstances, some perhaps reasonable (to be investigated), others surely unfair (that these inquiries were made public), he becomes a suspect (and a defendant) for having placed the bomb that killed a woman and was able to kill hundreds of people. The villainy of the complex.

With script by Billy Ray, expert in the ins and outs of lying certainties since The price of the truth (2003), Richard Jewell It is a work about a character and some exciting eventualities, which unfolds as a fascinating reflection on what it seems and what it is, and that ends up affecting us because it conveys an idea about ourselves. And there is the beauty of Eastwood’s camera and light work, which is barely noticeable because it is invisible, but it feels.

The film is based on a formidable prologue that defines in just a few minutes his two main characters, the singular hero and who later will be his lawyer, played by the magnificent Paul Walter Hauser and Sam Rockwell. And from there he mixes several times with the difficult ease of the muscle meter, in a tone that fuses drama, comedy and judicial intrigue. A story with echoes of the fundamental The great carnival (Billy Wilder, 1951), with which certain have been taken dramatic licenses turned scandalous, perhaps forgetting that what Eastwood has done is neither an essay nor an investigation nor a documentary, but simply a (great) film.