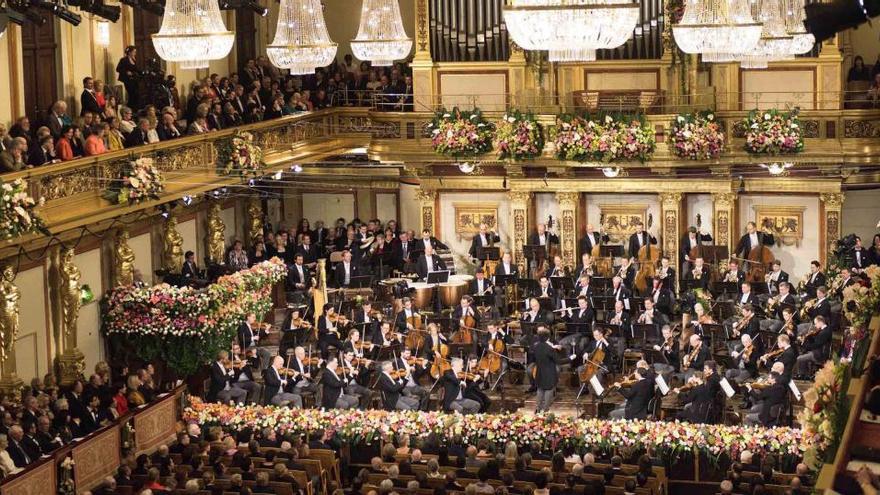 The most famous of concerts opened this year 2021 with the joyous rhythms of the Strauss dynasty waltzes and polkas, but an empty and silent room for the pandemic of coronavirus somewhat clouded his message of hope and optimism.

Riccardo muti led, for the sixth time, a New Year’s Concert in Vienna like no other: with a soulless Golden Hall of the Musikverein and telematic applause. Neither did the famous “Radetzky March”, which each edition puts an end to the recital, did not have the traditional accompaniment of the clapping.

Although the monumental hall was known to be empty and silent, Muti’s initial greeting to an absent audience and close-ups of a ghostly stalls were breathtaking.

The lack of any reaction to the conclusion of each piece gave the recital a test air and the musicians, aware of this problem, tried to respond with a very fast transition that altered the usual tempo of the concert.

The telematic applause of 7,000 people from all over the world through an application at the end of each block gave some heat to the act, although the image of the members of the Philharmonic standing before that void also left mixed feelings.

… For a great concert

However, the Neapolitan maestro and the Vienna Philharmonic overcame the adverse circumstances and offered a great musical spectacle, and that, under the current circumstances, is already a triumph. “It is strange for us to play in a totally empty room”, recognized an emotional Muti during the recital, but “we are still here believing in the message of music”, despite “a horrible year”.

The lightness and vitality of the Strauss waltzes, polkas and mazurkas and his contemporaries sneaked into the homes of millions of people in more than 90 countries thanks to television and radio, which have turned the recital into a world event.

Muti and the Vienna Philharmonic launched their message of hope through music, a language that unites beyond languages ​​and borders. And, despite all the inconveniences, the recital has allowed us to dream that 2021 will be better than the fateful previous year.

Television production abounded in the beauty of the Golden Room and in the careful floral decoration. More than 30,000 lilies, roses and orchids of the most vivid colors filled the television shots to bring freshness to the act.

Muti, 79, has become with his sixth New Year’s Concert in the director alive that more times has taken the baton. He has conducted the Philharmonic on more than 500 occasions over fifty years and knows perfectly the quality of its interpreters.

The Neapolitan conducted the recital with your usual content style, sometimes without setting the rhythm much and in a grim way, although he has allowed himself many complicit smiles with the musicians.

The recital went smoothly, without ups and downs and guided with the wise determination of Muti. Seven pieces were premiered, including the first two that marked the energetic beginning of the recital: “March of the operetta Fatinitza”, by Franz von Suppè, and the waltz “Ondas sonoras”, by Johan Strauss Jr. He also highlighted the interpretation of the “Emperor’s Waltz”, in which Muti and the Philharmonic flew high.

The Spanish José Carlos Martínez (1969) has also entered the history of the most watched concert on the planet by becoming the first choreographer to repeat two years in a row.

The former director of the Spanish National Dance Company devised two ballet pieces for the television broadcast: one, based on a polka set in the cinema silent from the 30s and, the other, in a waltz in the most classic Viennese tradition.

The first performance was the French polka “Margarita”, by Josef Strauss, recorded in the central Loos House -a benchmark of Viennese modernism- and the second the waltz “Voces de Primavera”, by Johann Strauss Jr., in some summer gardens of the Palace Liechtenstein because it was filmed in late August.

For peace and culture

Before the first of those tips, Muti addressed an unusually long message and staff in which he claimed music and culture as weapons of peace and necessary for the mental health of humanity. “Musicians have flowers on their ‘weapons’, not instruments of death. We bring joy, peace, brotherhood and love. Music is important not because it is entertainment, but because it has a mission to make a better society,” Muti said.

The Italian teacher affirmed that “health is the most important thing, but also mental health”, and asked the rulers not to forget that culture is essential to create a better society.

The concert concluded with a “Radetzky March” in which Muti could not direct the rhythm of the clapping of the audience and with the applause from a distance of 7,000 people.

The Vienna Philharmonic announced that the next New Year’s Concert will be conducted by the Argentine-Israeli director Daniel Barenboim for the third time, after the 2009 and 2014 editions, in the hope that by then everything will be back to normal.