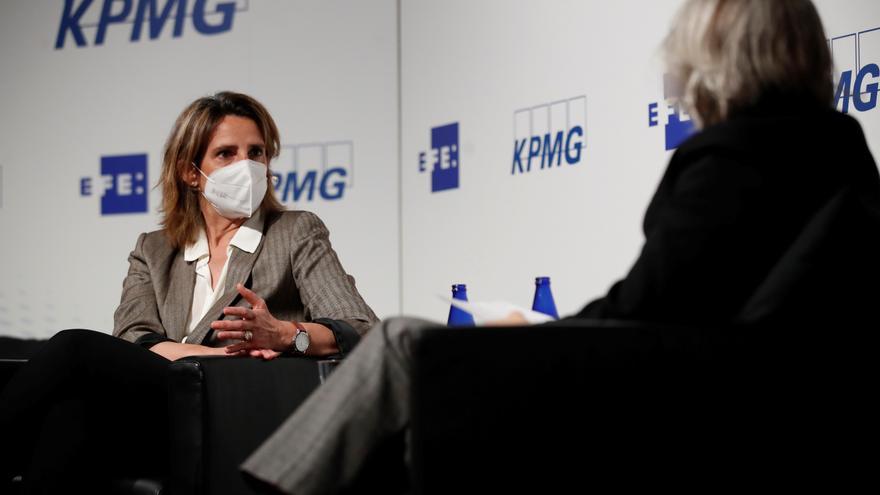 The fourth vice president and minister for the Ecological Transition and the Demographic Challenge, Teresa Ribera, warned this Wednesday that there are already planned investments in large renewable energy facilities in Spain that multiply by ten the objectives set for these sources in the next decade.

"At this moment, we are probably managing a volume of investment in large plants that multiplies our objective of implementing renewable energies by ten by 2030". A "surprising" data that indicates "that there is a lot of interest" but that has also generated an "alarm signal" and an "environmental concern" where these investments have been announced, Ribera said.

During a debate on European funds with the president of EFE, Gabriela Cañas, organized by the news agency and KPMG at the headquarters of the Instituto Cervantes, the vice president pointed out that "not necessarily" all this volume of investments will be developed and has assured that the Executive "will ensure that things are done well."

Transforming the energy system is probably “not possible” based only on installing solar panels on the roofs of buildings and in industrial estates, and it is necessary to “find the balance”, without this meaning “that nothing can be done anywhere ”.

The example of the "concern" of the Government regarding Catalonia, where ERC and CUP have agreed to a moratorium on renewables in their negotiations to form a government in a territory that, Ribera recalled, “has been without real development and growth for a long time. of its renewable power ”and it is“ well below ”with respect to the average for Spain and if its GDP and population are taken into account. Something that "may not be reasonable" if at the same time you want "more climate ambition."

Ribera has once again rejected the idea that a state electricity company could contribute to the energy transition. Regarding the partial takeover of the Australian IFM fund on Naturgy, which the Government has pending to authorize, it has reiterated that “it is necessary to ensure that if there is an entry of an external investor, it is with compliance with all the guarantees to avoid situations not suitable for the economy and the sector ”.

It is "important to understand what the rules of the game are in one of the most significant companies for the Spanish energy sector", with a "relevant role" in the gas market.