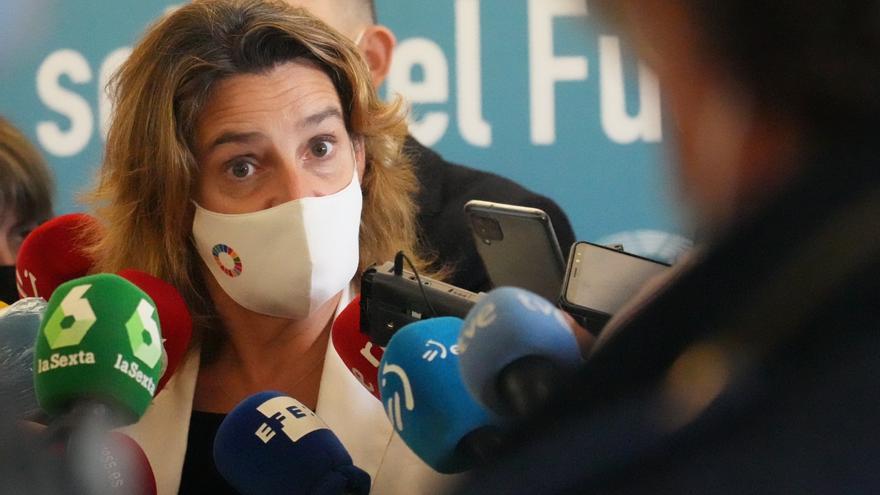 The Ministry for the Ecological Transition has resigned to go ahead with the tender to award the first hydroelectric concession launched under the mandate of the third vice president, Teresa Ribera: the operation of a small power plant, that of Láncara (León), whose specifications established the maximum term of the concession in 30 years, over the 20 years of the previous procedure of this type.

The agreement of withdrawal signed on October 15 by the president of the Duero Hydrographic Confederation (CHD), Cristina Danés, explains that "there are sufficiently justified public interest reasons" for the resignation. As no offer has been received, it will not be necessary to "compensate any contestant", highlights the resolution. The deadline to present them had just opened and ended on January 4.

To justify the resignation, the document indicates that with the basin plans that must be approved in 2022 still in public consultation, "compatibility with the new hydrological plan of the third cycle, currently in process, and that it would be applied in the time foreseen for the resolution of the concession of the exploitation ", explains Danés. Drafts released in June raised give more power to the State in the management of hydroelectric plants.

Located on the Pereda River (Sena de Luna, León), and with just 1.4 megawatts (MW) of power, the use has been stopped since May 2009 and until then it was operated by the current Naturgy. The original concession was granted in 1926 for 75 years from October 1931. In October 2018, the CHD issued a favorable report for the continuity of its exploitation and decided to put it out to tender.

The maximum term set by the specifications was 50% higher than the previous procedure of this type, which was launched before Ribera arrived at the ministry: another very similar plant in León, Lugán, which Iberdrola managed at the time and whose concession It expired in 2012. The winner was a subsidiary of the RPI group, controlled by the Luxembourg fund Cube. On the same day that the concession was awarded, Cube managed to get the World Bank arbitration tribunal to condemn Spain for cutting the PP government's renewables. Later put that millionaire award up for sale.

That 30-year term exceeded what was recommended in a recent article by Diego Rodríguez, professor and former counselor of the National Markets and Competition Commission (CNMC), in favor of adapting the new hydroelectric concessions "to current circumstances, extracting the income from scarcity of the resource ", cutting" drastically "the terms to no more than" 15 or 20 years "and avoiding" being locked in a very long-term relationship in a context of energy transition subject to high uncertainties. "

In that article in Fedea (a foundation financed by large companies such as ACS, BBVA, CaixaBank or Santander), Rodríguez claimed "to provide transparency on the characteristics of the concessions": "The intricate water governance system in Spain makes that information is not publicly available. " But he doubted that electricity would be cheaper if a public company managed this source, which uses a public good like water.

An option to which Ribera was opened in August, which Pedro Sánchez cooled down in September and which the PSOE opened last weekend in its 40th Federal Congress when considering studying alternatives for a change in the energy model, "including those that imply greater public participation ", with the recovery by the State of the exploitation of hydroelectric plants as a first step.

On Wednesday, CCOO advocated promoting "a large public company" for renewables using European aid to "democratize" electricity generation and "face the blackmail of the electricity 'lobby'."

The actual stock of hydroelectric MW that have already expired or will expire in the coming years is unknown and Ecological Transition It has only provided a list with the 30 most relevant concessions. In November 2018, Ribera explained that there were 115 extinct intercommunity basin uses, of which about a hundred were abandoned and with little apparent economic profitability. In addition, 25 concessions were expected to expire until 2020 and 70 until 2030.

This Thursday, Congress endorsed part of a CUP bill that calls for examining all concessions, but rejected, among other things, ensuring their reversal for the public sector to manage. The Plenary approved to demand from the Government a study of the status of the concessions with the support of all groups except Vox, PDeCAT and Coalición Canaria, who voted against, and PP and Foro Asturias, who abstained, reports Europa Press.

The contest that the ministry has just canceled began at the beginning of the month, coinciding with the opening of the term to terminate the concession of one of the great Douro dams, Villalcampo, which with 206 MW is the largest that expires this decade (2024 does) and, unlike the small jumps, is manageable. It is currently operated by Iberdrola, which has staged a confrontation with the Government over the remuneration cut to electricity companies to contain the all-time highs that the stratospheric rise in gas has driven in the wholesale electricity market.

The penultimate rudeness of the electricity company has been not to attend, like Endesa, the auction of renewables held by Transición Ecológica on Tuesday. And this Thursday, Iberdrola challenged the Government to withdraw the Royal Decree-Law that Congress endorsed last week in exchange for "not changing electricity prices to the industry." "Everyone can be wrong due to lack of information and rectification is wise," says the multinational.

In spring, before the electricity price crisis, the Government pointed out that its idea for Villalcampo was to put it out to tender again. A few weeks ago, the ministry said that "the characteristics of the concession are being studied and the next steps in the termination procedure are being analyzed."

Launching a contest is one of the options contemplated in these cases. Sometimes the facilities have been managed by the respective hydrographic confederations. Or infrastructure is destroyed. In the current legislature, the concessions of 21 dams, all of small power, and 12 of them have chosen to order demolition by the owner for environmental reasons.