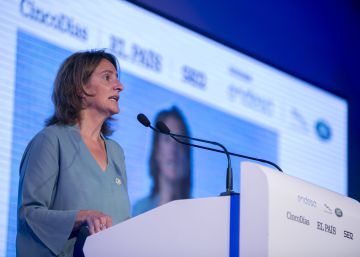 "I think the president of Red Eléctrica (REE) is responsible for his company, not for the government." So the acting minister for the Ecological Transition, Teresa Ribera, has valued the statement released yesterday by the electric system operator and signed by its president, Jordi Sevilla, who strongly criticizes the proposal of the National Commission of Markets and Competition (CNMC) to cut the remuneration for electric and gas transport. "We are in an initial phase in which the CNCM has submitted a draft," added Ribera on Thursday in statements to journalists after his speech in the event The Challenges of the Electric Car, organized by the main headwaters of the PRISA Group, editor of EL PAÍS. The acting minister recalled that the supervisor has been announcing a change in the calculation methodology for years and that the ministry will transfer its opinion to the agency in a report in which it is working.

The proposal of the CNMC it foresees a cut of 7% to the remuneration of the electricity companies and of 17.8% to the gas distributors. On the other hand, the transport of electricity and gas, for which REE and Enagás are responsible, will have a cut of 8.2% and 21.8%, respectively. Sevilla criticized in his letter that this approach could hinder the energy transition and compliance with the Integrated National Energy and Climate Plan (PNIEC), not setting, in his view, a clear regulatory environment.

Naturgy also criticized the proposal of the CNMC and announced its decision to temporarily halt investments in new gas networks in Spain. "I'm not going to judge," Ribera said Thursday, adding that the deadline for the allegations is until August 9. "What I know is that Naturgy has to stay in the Spanish energy market," he added.

During his speech at the event, sponsored by Endesa and Jaguar Land Rover, Ribera insisted that air quality, responsible for 30,000 premature deaths a year in Spain, is one of the main concerns of the ministry. He recalled the commitment of the country to move towards a total decarbonization of transport and the opportunities that the electric car supposes for the industry, that for Spain it would translate into a profit of 560 million euros between now and 2030 for the transformation of the vehicle fleet.

Therefore, it has been confident not only that Central Madrid remains in force, despite the hostility of the new City Council led by the popular José Luis Martínez-Almeida, but that its model is extended to other areas of the country. "I do not have the slightest doubt that Central Madrid will move forward and not back down. We are reminded by the European Commission, the WHO (World Health Organization) and above all the citizens, "he said. On Wednesday, the city of Madrid and the Metropolitan Area of ​​Barcelona received a notice from Brussels because of the high levels of pollution. The acting minister explained that the two administrations have not yet had "material time" to answer the Commission's letters, and added that there are other areas, such as the Henares corridor, where it is necessary to intervene to reduce pollution .

"Mobility is changing, we must learn to build it with rigor," said Ribera. The higher cost of electric vehicles – a price parity is foreseen with combustion cars between 2022 and 2025, recalled Ribera -, their lower autonomy and shortage of recharging points make them not the first option for the consumer. "It's a huge challenge," Ribera said, "but it's not a transitory issue or a fad, it's a structural change."

Also the minister in functions of Industry, Reyes Maroto, has participated in the event and has insisted on the need to create the conditions so that the decarbonization of transport becomes a reality. In a round table together with the CEO of Endesa, José Bogas, and the President of Jaguar Land Rover, Luis Antonio Ruiz, Maroto has acknowledged that Spain does not have a sufficient stimulus plan to promote the diffusion of the electric vehicle, also due, he recalled, that the Government is working with an extended budget. "That's why it's also important to have a stable government," he said.

Maroto recalled that Spain is part of the Alliance of Batteries of the EU and that there are talks with Portugal to lay the groundwork for a hypothetical Iberian alliance in this regard. Likewise, he assured that work is being done to develop batteries also in Spain -which today represents half the cost of an electric car-, and thus reduce the imports of the major Asian manufacturers. For the moment, the Government has signed an agreement with China to create an ecosystem that allows the arrival of companies from this country to Spain in the short term, and from there it is progressing towards the development of its own technology. Bogas, from Endesa, has ensured that by 2023 there will be recharging points on the main roads at a maximum distance of 100 kilometers. "We want to turn Spain into a platform for the development of the electric vehicle", concluded Maroto.

Calviño defends focusing ERTE on needy companies rather than sectors