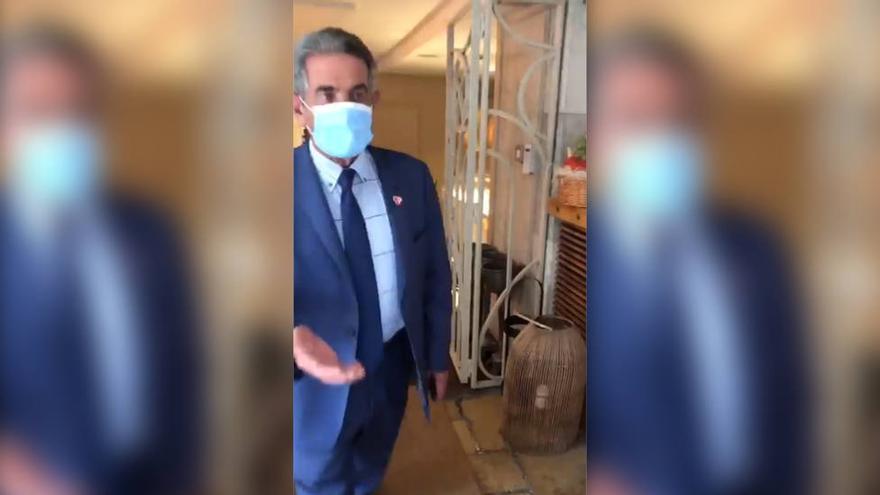 The PP, Citizens Y Vox They registered three requests for an urgent appearance before the Parliament of the Cantabrian president on Thursday afternoon, Miguel Angel Revilla, to explain if you ate inside a restaurant Santander, something that is prohibited in the region by measures to prevent the pandemic.

These requests were announced, through press releases, by the three opposition parties in Parliament after a video was published on social networks in which two men recriminate him, at the door of a restaurant in Santander, having eaten and smoked indoors, something that the president denies and says that the space where he has had lunch is a terrace (in which it is allowed to eat) and ensures that the cigar on the table is not his and he has not smoked inside the premises.

The situation occurred hours before the Ministry of Health published in the Official Gazette of Cantabria the extension of the closure of the interior of the hotel business to prevent the spread of the coronavirus.

The president of the Cantabrian PP, María José Sáenz de Buruaga, said that "Revilla he owes explanations to all Cantabrians " after the video and announced the request to appear before the camera to find out what has happened.

The spokesman for Citizens in Parliament and in the region, Félix Álvarez, announced that he had also requested the appearance of the president for "laugh in the face of all Cantabrians and breaking the law, not only when eating in a closed space, but also has been recorded smoking a cigar in the restaurant, "he said.

His Vox counterpart, Cristóbal Palacio, pointed out that his party had also asked Revilla to appear urgently before Parliament to give explanations, because he believes that the president's attitude is one of "contempt" for the Cantabrian hotel industry.

"The facts that have been denounced through videos and photos on social networks in relation to a meal by Revilla inside a restaurant deserve a clear explanation. That he appear at a press conference or appear in Parliament, but give an explanation ", added in a statement the PP spokesman in the chamber, Íñigo Fernández, who preferred "not to advance events until listening to the protagonist."

However, he added that "it would be very serious for those who have closed the interior of the hotel and catering establishments is breaking his own rule. " And he pointed out that in December the regional vice president, Pablo Zuloaga, and the Minister of Health, Miguel Rodríguez, already "organized a meal for eleven people at the facilities of the regional Film Library."

"Revilla is the clear example that one thing is what he says and another, very different, what he does, as he has shown today (referring to Thursday) in Santander," insisted Félix Álvarez, who regretted that "the person who owes the most set an example at this time is precisely the one skip the bullfighting rules. "

Álvarez also stated that if it is confirmed that the president has eaten indoors, will request your resignation.

"Revilla has not respected the citizens of Cantabria, it has not respected the hoteliers whom it is leading to ruin with incoherent decisions, and it has not shown the slightest respect for the position it holds, since I should set an example in these difficult times ", added the Vox parliamentary spokesman, who insisted that the president had been "surprised" inside that restaurant by some hoteliers, who recorded him.

Revilla denied having eaten inside

For his part, Revilla denied having eaten inside a restaurant through his social networks, where he published a video of the space in which he affirms that he ate and assures that it remains "of course" that is "an open and ventilated place, not in a confined space. "

He also added that he had been invited "by an important company in Cantabria, which was the one who chose the place and made the reservation ".

Subsequently, Revilla himself has requested to appear before the regional chamber and has declared that he has no intention of resigning.

"If I thought that I have done something wrong, you don't have to ask me ", Revilla has asserted this Friday.

In statements made this Friday to the media after the controversy, Revilla has denounced that for 20 days he has been subjected to a "tremendous pressure" on the part of this group - not of the entire sector as a whole, he has clarified - that, as he has said, "he is making his life impossible" by going to acts in which he participates to "boycott them", throw "insults and threats" .

In fact, he has assured that even this situation of "general hostility towards his person" is affected by members of his family and has reported that even they have "violated" the life of their little daughter, which the other day they recorded when he was throwing away the garbage and they called him "all kinds of unpresentable things", something that, as he has said, "he will not tolerate."

For this reason, Revilla, who believes that this group could be "encouraged" by some political parties, has assured that it is "thinking" of asking for protection, something that he did not do even when he appeared in the ETA papers, because not only are they "coercing" his life as president but they are even "reaching his family circle."

Thus, he has indicated that he is going to ask the Government Delegation that, above all, in public events in which he has to participate in his work as president and in which by the action of this "very well organized" group it looks "constrained" and "coerced", there is "a little vigilance".

Although Revilla understands the "anger" of the hospitality industry due to the restrictions in force in Cantabria towards this sector, something that he has insisted is determined by the Ministry of Health and not him, believes that this "harassment" situation that he is living "in his own flesh" and, in the face of which he feels "defenseless", "he cannot afford it".

For this reason, he has appealed to the political parties not to "encourage" or justify this type of behavior and situations because "They start like this and end up in something else." "Be careful with encouraging these groups," Revilla has warned.

The "real version" of Revilla

Regarding the specific facts, Revilla explained that he was summoned to eat yesterday, Thursday, by some "very important" entrepreneurs in this restaurant in Santander, located on Calle Castelar because they wanted to tell him about a "new investment project" for Cantabria that they were considering.

According to his version -the "real" one, he said-, it was these businessmen who made the reservation in the restaurant at 2:00 p.m.

He explained that, to go to lunch, he left the Government and lit a cigar on the way. When he got to the restaurant, Revilla He asked for an ashtray to take advantage of the rest of the cigar after the meal that was left, which was recorded by this group, who accused him of having been smoking at the table. These statements deny those he makes in the video of the hoteliers, in which he affirmed that the cigar was not his.

Before some images that have also been issued with the cigar, Revilla has indicated that they may have recorded or taken photos with him in hand but "never in the mouth".

As for the space where the food was produced, Revilla has denied that it was inside the premises, but rather in a "kind of terrace", an "open space" -he said- with ventilation by "up ", on" one side and the other ".