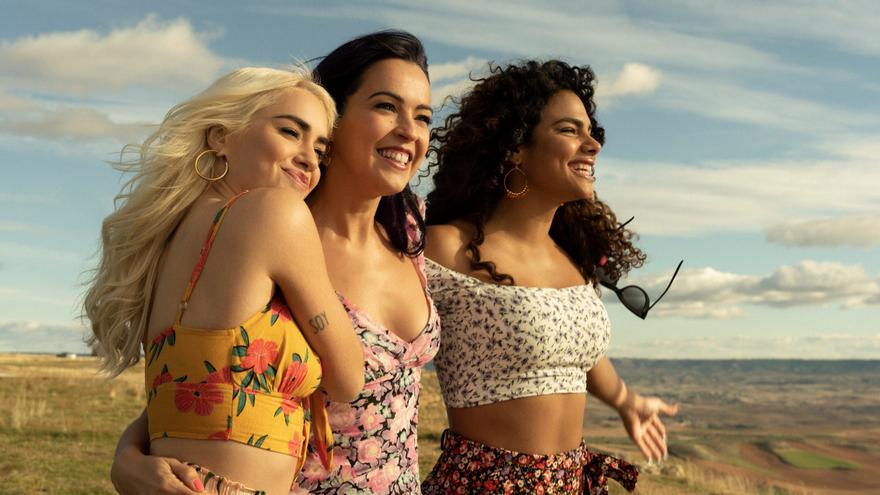 Madrid, Jul 23 (EFE) .- From the flight to freedom to the persecution of their exploiters. This Friday, the frenzied journey of Coral, Wendy and Gina continues on Netflix in the second season of “Sky Rojo”, which promises adrenaline, revenge and anger, dressed with sequins, blood and high heels.

The series of the creators of “La casa de papel”, Álex Pina and Esther Martínez Lobato, continues in the tense moment in which the first season ended, with the girls in the middle of the robbery in the hostess club of passports and money for the idyllic new beginning.

Coral (played by the Spanish Verónica Sánchez), Wendy (the Argentine Lali Espósito) and Gina (the Cuban Yany Prado) are three prostitutes who flee from the Club Las Novias after a violent event with Romeo, the owner and main pimp, played by Asier Etxeandia. In his footsteps go the thugs, the brothers Moisés and Christian (Miguel Ángel Silvestre and Enric Auquer), while they fight to escape and to take something that allows them to start over.

“Sky Rojo”, which takes its name from the red skink sofa that presides over the room where the girls wait for their customers, is a cocktail of action and adrenaline with a “tarantinesca” aesthetic of “Latin pulp” that is about-away from drama and with a black action and comedy format – themes with a strong social background such as trafficking in women and forced prostitution.

In Spain, one of the countries in Europe with the highest consumption of prostitution, millions of women are brought to the country with promises of a better life and are forced into prostitution. Wendy and Gina are the example.

“We have all seen the neon signs and the letters of some club on the road and we systematically see on the news the dismantling of trafficking networks. This is happening, it is a limbo in reality that everyone knows without seeing the back room of what is happening. ; We want to involve the viewer in this reality “, Esther Pina and Álex Martínez Lobato pointed out to Efe in an interview when they presented the series (it premiered on March 19).

For this second season, the creators of the most watched Spanish series internationally in history have not held promotional events since, they confirm on Netflix, they are immersed in their next premiere. Season 5 of “The Paper House” (Vancouver Media), which will end the robbery, will arrive in two parts of 5 episodes each, on September 3 and December 3.

What’s new in “Red Sky” is also a kind of volume 2 of the first part, since after the first season there is no break in continuity. There are again eight 25-minute chapters in which a Romeo is seen obsessed with finding the girls, especially Coral, for whom his obsession does not stop growing.

It will also be seen how Christian and Moisés decide to become independent from him and move to the healthy and good side of life, something that the pimp does not see with good eyes. Family is family and it is not broken, even by force.

But the protagonists are still them and, if in the previous installment their objective was to avoid all kinds of dangers and stay alive for five more minutes, in the new episodes the roles change and it will be they who decide to vary their plans to escape stealthily and return to the club to get revenge.

In the end of the first season, when victory seemed close at hand, it could be seen how Coral desperately struggled to revive Romeo at Club Las Novias. In this new installment, his self-destructive spirit goes much further and hatches a kamikaze plan of revenge against the pimp, an “all or nothing” from which he will not get out alive if he fails.

Wendy’s energy remains fireproof. Although she is seriously injured and in this installment she will debate between life and death, she will not lose the desire to fight for a future for herself and her friends and will join the idea of ​​taking revenge on her pimps. In addition, he will go his own way to shed the rancor and hatred caused by the damage that has been done to him.

Gina will continue to be the most innocent and pure of the three friends, although in this installment she will take the reins and be much more determined. He will not lose his positive spirit even in the worst moments and will launch into the plan of revenge without hesitation, staying with Coral and Wendy, together and faithful until the end.