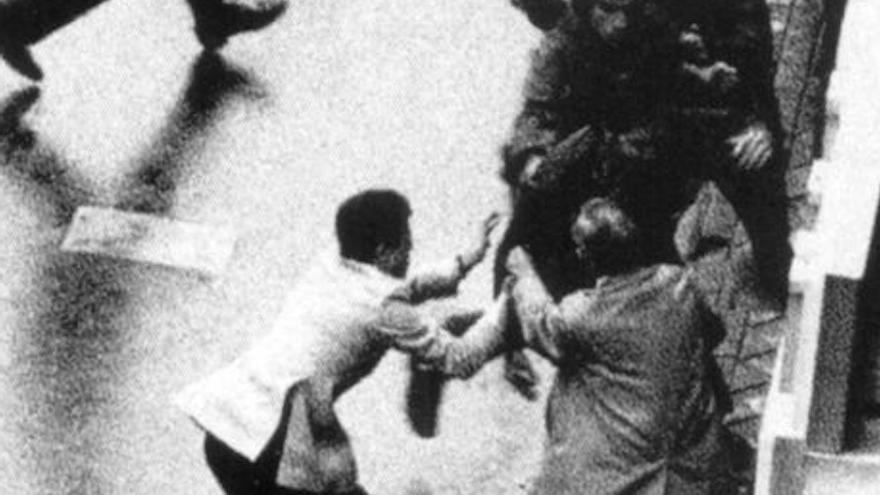 The inscription is gone. It has been erased from the wall. “In this enclosure the seriousness of a bank prevails, the charity of a convent, the discipline of a barracks”. But the prison yard looks the same as it did fifty years ago. Repainted. Cleaner. With far fewer men than then walking in its arcades. Now just a few dozen. I remember then, in the sixties, there were hundreds. There had been thousands at the beginning of the postwar period.

But the “penalty” remains the same. A floodgate of memory opens to my memories as a child. The menacing chestnut trees on the driveway. The gate, now without the sentry boxes, which gives way to what were – and what are – the phone booths. The extreme noise of the gates when opening and closing. The gray color of the Burgos sky. The cold, that gloomy cold of the central prison. The porticoed patio, the concrete floor, an aimless wandering. Without sense. Go around the yard.

Thousands of anti-Franco prisoners were grouped in this jail during the dictatorship, in what was the main reservoir of the democratic opposition. Impossible living conditions. Overcrowding and its reverse, loneliness. Insufficient and poor quality food. Mandatory Masses. Semi-slave labor in his workshops for a miserable money. Years of isolation without contact with the families, except in the few moments in which they could move and see themselves through the double bars of the parlor.

It was also, from the beginning of the dictatorship, the “University of Burgos”. A space, as reflected in Enric Juliana’s book, of permanent training. A political school that thousands of men passed through. A meeting place.

For the boys and girls it was something else. In the 1960s we could only go in to see our parents three times a year. El Día del Carmen, July 16: it was a graceful gift from General Franco’s wife, Carmen Polo. On September 24, La Merced, the “pious”, patron of the penitentiary institutions. And the Day of the Magi. Three days a year. I always remember it as a tense moment. Children to the nines, as the children of the poor have always been. The fathers, those men hardly known to us, in their best clothes under their gray uniforms. They went out of their way to make everything perfect. They made us chocolate and distributed it on the patio arcades. They invented games and shows to break the ice. The double ice. The ceremony of smiles. We all lied. We were all good. We all took refuge in the distant hope of normality. We all shut up.

The surprising thing is that today this prison continues to function as such. Inaugurated in 1932. We do not have the exact figures, although its archive is a treasure trove of information to be exploited. A jail built for 400 prisoners in which more than five thousand were piled up. Around 293 inmates were shot on its walls between 1936 and 1941. More than 380 “disappeared.” Another 359 prisoners died of illness behind bars. Years of long sentences until the death of the dictator. Thousands passed by.

Now, however, the prison behaves like a different living being. The committed work of a group of Burgos journalists and prison officials has launched an extraordinary project. With the active presence of a group of inmates: the newspaper “La voz del patio”. A magnificent instrument for participation and reparation. On the occasion of the film “La cigüeña de Burgos”, directed by Joana Conill, daughter of an anti-Franco political prisoner, she and the one who signed this were able to return to jail. To feel again, to observe, to share our memories, our absences and our silences. With the prisoners who now inhabit it and who make up the newspaper’s newsroom. Fortunately, the film will be able to be presented in the prison itself next spring.

The rehabilitation of the resistant militancy requires a broad, calm and innovative process that leads us to the political, cultural, symbolic recovery … of the global memory of the majority, from the questioning of the prevailing story, which has tried to convert women and men. resistant men in elements for oblivion, or perhaps worse, for the slight memory or nostalgia. Addressing our memory is addressing our present and our future: placing our visions and our ways of understanding life and the world at the center of the collective narrative of this country, and in particular of its cities and towns. And this goes far beyond the current scant legislation and the demands – necessary, but insufficient – for justice and reparation. The Burgos prison should therefore be a recovered space for common memory.

This complex path of collective construction almost from the margins could generate recognition, political practice, dissemination of knowledge and learning. For this, its approach must be protected by the testimony of the resistance, now diffuse and disseminated, in educational, cultural proposals, management of public spaces linked to historical memory, of occupation of formal spaces (museums, libraries, research centers, etc.). This brings towards us the tension between individual emancipation and collective emancipation, relating past, present and future of individual and community struggles as crucial elements of our “way of being”.

Stories of personal appearance cannot remain in the realm of the merely individual. Its value lies in the common, in that it reveals and places us. So that we do not hide the memory in the private sphere. It happened, and that is what he explains to us.

Another phrase I learned to read about has also been erased from the walls of Burgos. “Only a tear redeems a man“Looking back now we think that a people capable of orchestrating the mechanized death and disappearance of tens of thousands of people and the mass repression in prisons, and then designing their own oblivion, must inevitably loot much more. As it was.