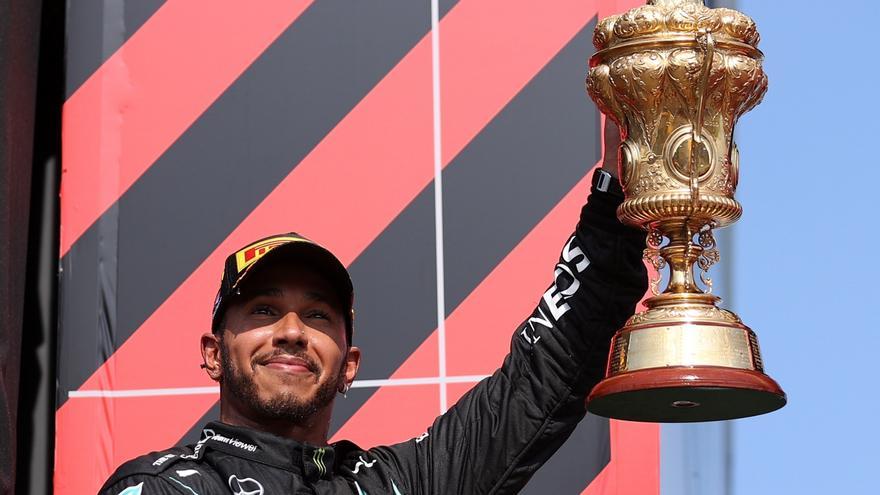 The sevenfold English world champion Lewis hamilton (Mercedes) won the Great Britain Grand Prix, the tenth of the World Cup Formula One, played this Sunday at the circuit of Silverstone, where he cut 25 points to the leader, the Dutch Max verstappen (Red Bull), who retired in the first round, after having an accident – fortunately, without major physical consequences – when touching the previous one.

Hamilton, 36, extended his Silverstone win record to eight with his fourth win of the year, ahead of the Monegasque Charles Leclerc (Ferrari) and his Finnish teammate Valtteri Bottas; third in a career that the Spanish Carlos Sainz (Ferrari) and Fernando Alonso (Alpine) finished sixth and seventh, after minimizing damage and optimizing resources, respectively. Verstappen, 23 – who ended up in the hospital as a precaution, after suffering an impact of 51 G-force points, he leads, after the first ten tests, with 185 points: eight more than the English star, sanctioned with ten seconds for the aforementioned action and which caused the delirium of the 140,000 spectators who packed Silverstone when he overtook Leclerc in the absence of two of the 52 laps that were given to the legendary English track.

The first moments were vibrant and led to a red flag interruption. Verstappen, who on Saturday had won the first sprint qualifying in history (17 laps, 100 kilometers) and with it, had achieved his fifth pole of the year (the fourth in a row), defended himself from Hamilton’s attack in the first moments . But at Copse, the ninth of Silverstone’s 18 corners, The Englishman’s Mercedes hit the Red Bull’s right rear tire from the Dutch; which crashed at high speed into the protective barriers. Fortunately, without major physical consequences. But generating the great controversy, in which Max’s environment described the sanction to English as ‘ridiculous’ or ‘insignificant’; that, in his own and his team’s opinion, he would not even have deserved

The opening of sprint qualifying meant the free choice of tires – usually, after a conventional qualifying, the top ten on the grid face the race with the compound used on their good lap in Q2-; and all opted for the means, except the Mexican Sergio Pérez, partner of the World Cup leader, that, after spinning on Saturday, he started last, from the ‘pit lane’, with the hard. And that, like his captain, he left England without points, on a disappointing day for Red Bull, which also saw its lead over Mercedes reduced to four points (289-285) in the Constructors’ World Cup.

Hamilton did not miss, as he did in Baku, his opportunity to cut points in the World Cup qualification. And he ended up causing the ecstasy of his fans when, with two laps to go, he passed Leclerc; who settled for equaling the best position of the year for the ‘Scuderia’ that Sainz had achieved in Monaco. The Madrilenian signed another great race to finish only sixth – downplaying, in an elegant way, the poor change of tires that ruined his prospects -: a place ahead of Alonso, who left happy after having optimized, once again, the your Alpine’s resources.

Frenchman Esteban Ocon, Alonso’s partner, finished ninth; one place ahead of Japanese Yuki Tsunoda (Alpha Tauri), who also entered the points this Sunday in the legendary Northhampton track, which hosted, 71 years ago, the first race in the entire history of F1. In which, three five victories in a row for Red Bull, Hamilton and Mercedes once again gave excitement to a World Cup that will resume in two weekends in Hungary, site of the last race before the summer break.