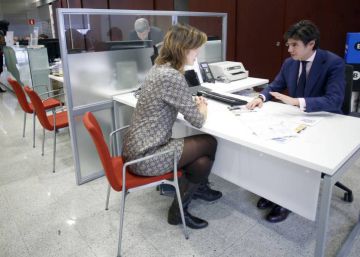 The Bank of Spain in its 2020 memory Among the three main complaints received, those related to the service to the public in offices in a context of reduction of service points and, in some cases, limitations of cashier hours by banks, with special incidence in rural areas and banks, stands out among the three main complaints received. at risk of depopulation.

Problems such as the time window restriction, the collection of commissions for withdrawing money at the bank office or the impediments to pay non-domiciled bills have an increasing number of claims before the supervisory body.

It is common for users of financial products to see the sign "Payment of bills, only Tuesday and Thursday from 09:00 to 10:00 hours" in bank branches. This action by the bank produces annoyances among its customers, but also damages when the payment of receipts that are not domiciled is left until the last minute, which may cause interruptions in supplies such as electricity, gas or telephone.

A problem that is accentuated in emptied Spain, when the citizen has to travel to the town where there is a bank office and finds the cash register closed to pay the bills. This situation has increased with bank mergers and the reduction in the number of branches.

Is it legal for banks to have restricted hours to pay non-direct debits through the teller window? Banks are free to establish citizen service hours in their offices for the payment of non-domiciled bills, such as those for essential services such as electricity, water, gas ... Nothing to object to a decision that is part of politics commercial of financial entities.

Currently there is no legal regulation that requires banks to establish a certain schedule as mandatory to pay bills. The only duty for financial institutions is to place informative posters in their offices on this type of customer service hours.

Know in depth all the sides of the coin.

The limitation of opening hours to the public should not apply when citizens go to banks to pay fees, taxes or fines. In these cases, the banks are carrying out activities as collaborators of certain public bodies such as the payment of fees to the Public Administrations, the fines imposed by the municipalities, the entry of fees from public universities, the payment of Social Security receipts ...

In these situations, the Bank of Spain does not consider it admissible to limit the service to the schedule established for the payment of bills that are not domiciled. Financial entities are obliged to comply with the conditions established in the collaboration agreement signed with these organizations, as well as in the applicable sector regulations.

The Bank of Spain's Claims Service already considered in 2005 contrary to good practice for a financial institution to consider that a transfer requested by the client was a payment of receipts, so it applied the restricted hours established for that purpose. The purpose of transfers is indifferent; the destination of the funds —even to pay a receipt— does not alter the nature of the banking operation carried out and for which the entity charges the corresponding commission.

Take money out of the box

It is increasingly common to go to the window of our bank to withdraw money and the cashier say that this operation has a commission and offers you the alternative of obtaining the money at the ATM.

The commissions for withdrawing money at ATMs of other entities are common, but the payment for this counter service is a new practice that causes surprise in customers and is a hindrance for elderly or unfamiliar with technology.

The Bank of Spain considers it inadmissible to establish a time, date or amount restriction for making deposits or withdrawals in customers' current accounts, services that are considered included within the basic cash service.

Although the bank informs its clients of the limitations of attention at the cash register, this should not prejudice the right of clients to dispose of their balance in sight accounts at all times.

The Bank of Spain has established a good practice criterion according to which entities must make available to their customers at least one free, accessible and secure means, taking into account the particular circumstances of each group, so that they can have cash from their account.

With this recommendation to entities, the Bank of Spain tries to prevent this commission from penalizing access to cash for these groups that may be left unprotected.

For the payment of receipts during reduced cashier hours, many entities offer the online banking service and promote the use of their mobile applications that allow the option of paying receipts and taxes. However, a significant percentage of the population -especially the elderly- has neither the knowledge nor the possibility of using these channels offered by the new technologies.

To pay a receipt online, the citizen must fill in the information that appears in the payment document (code of the entity that issued the receipt, a reference number code and another identification number code and indicate the amount). It is possible that the bank offers to make the payment of the receipt through its application using a device with a camera, allowing the barcode that appears on the document to be scanned to obtain the data very quickly.

When the bank intends that all operations related to the cashier service are provided only through self-service channels (ATM, internet and App), this condition must be included in the account contract, the Bank of Spain warns that, in addition It adds that the client must be informed individually and at least two months before "in the case of a supervening limitation".