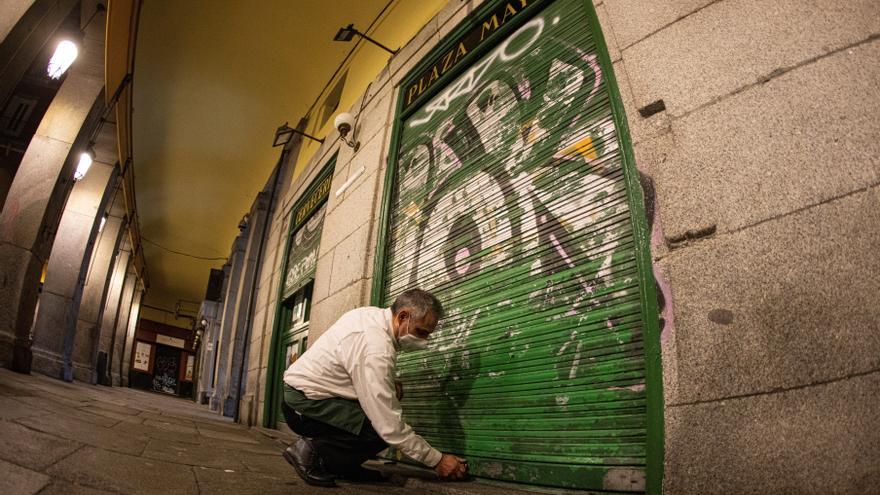 Madrid, Jan 27 (EFE) .- Restaurants in Spain, which claim to be a part of our way of life and socialization, face successive closures and schedule limitations with resignation as long as they respond to health interests, although they consider that the actions taken against the sector "seem like a siege."

Not only do chefs like Francis Paniego, with two Michelin stars in El Portal del Echaurren (Ezcaray, La Rioja), or Pedro Sánchez, with one in Bagá (Jaén) denounce it on social networks, but this Wednesday it has also been revealed at the Culinary Action! organized by the University of Gastronomic Sciences Basque Culinary Center (BCC) of San Sebastián.

"The sector is suffering a lot. The health crisis is the priority and if it has to be closed, it is done, but we perceive mistreatment to the sector, which we are not valued ... It seems like a siege, really", he said in this meeting Samuel Naveira, who has just released a Michelin star in MuNa (Ponferrada, León).

Like his professional colleagues, he has a feeling of "anger" and the feeling that they are held responsible for infections, despite the fact that, according to a report by the Ministry of Health, less than 2.3% of infections of coronavirus occurred in the hospitality industry, highlights the sector's employers.

"The hotel industry in Spain is a fundamental part of our culture, of our way of living, it is not just a sector that contributes a percentage to the country's economy. It makes us different from the rest and, together with our cultural and natural heritage, makes Let's be a world-class tourist destination (...) It is acceptable to support her now that she needs it most, we cannot destroy everything that has been achieved, "said chef Pedro Sánchez on Twitter.

Francis Paniego, who has unsuccessfully negotiated measures with the Government of La Rioja, cries out on the same social network for "a de-escalation and security protocol endorsed by universities" to work with relative normality "from May or June."

"We need rules of the game and certainties that allow us to address the immediate future of our sector until the arrival of the vaccine" to the entire population, asks against "the criteria of 'experts' who have found the perfect excuse in hospitality and commerce to make society believe that they do something. "

Marcos Morán, from the centenary Casa Gerardo with a star in Prendes (Asturias), has exhibited at Culinary Action! the experience of a rural restaurant, located on the side of a national highway, which has opted both for "food on request" at the national level and for opening or closing depending on whether it is economically profitable.

"I have a business to earn money and, if the income statement is negative, they are expenses that you cannot assume. I would rather be preparing the Valentine's menu for the restaurant, but I do it to serve at home," he indicated and has It has been pointed out that food delivery accounts for "between 15 and 20%" of its turnover and, in addition, it allows its guests not to "forget" the restaurant.

MuNa, in Ponferrada, has received its first Michelin star in the middle of the pandemic and, what had to be a year of celebration, has turned into a fight against imposed closures.

"The economic factor has weight, but also the emotional one. This uncertainty of the open-close-open in a responsible sector, where we do what is asked of us and more to safeguard our clients, closings without aid undermine you emotionally" , Samuel Naveira has asserted in Culinary Action!

He has also opted for food delivery as an alternative, but maintains that it must be different from what the restaurant offers so as not to self-swallow.

Luis Lera, another example of rural development through gastronomy in Castroverde de Campos (Zamora), understands that the measures adopted give "the urge to throw in the towel", but encourages his colleagues to embark on new projects as this chef has done at the head of Lera, who has created a cooperative of small pigeon producers open to farmers in the region to "create a sustainable livestock model".

However, he has acknowledged that he is concerned that this "attack" on the hotel industry "will change the way of life of the Spanish." "Having tapas, going out to bars and restaurants to socialize ... The fear is that they will take away this way of living because in rural areas the bar is the center of town."

Another example of improvement in this Culinary Action! It was that of Cristina Cruz and Eduardo Quintana, with a Michelin star in La Bicicleta (Hoznayo, Cantabria), who to overcome the closures have launched by ferry and gastroneta to offer a more informal meal, but made with the same quality of ingredients . Everything, they have said, to maintain their team and the relationship with customers.