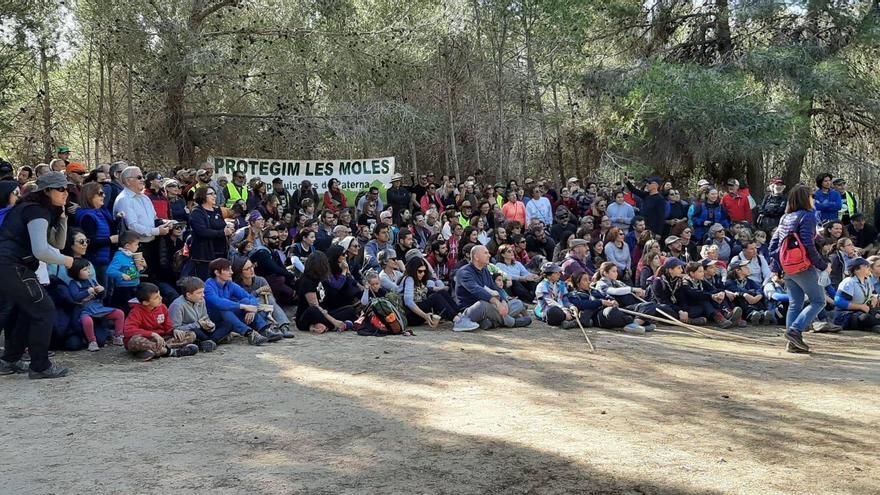 There is a way of understanding leisure promoted by the fiercest capitalism that is unsustainable and yet has been imposed in the “developed countries” in the last five decades. A very short time in the history of humanity whose consequences are more terrible than a conventional war in terms of the destruction of the world and the social imaginary. They push us to live without limits to consumption as if this land could sustain that unbridled demand. This is the case of the Leisure and Consumer Conglomerates such as the one that the multinational Intu he insists on getting up in Paterna.

In a article published in this blog A few months ago, we compared the business that they sell us as leisure to life that can never be subjected to any economic calculation. Now, we want to value the territory that they propose to destroy. The French landscape architect Gilles Clément in his ‘Manifesto of the third landscape’ offers good arguments to revalue those territories, which Intu declares unattractive vacant lots, condemned to be used as rubbish dumps or uncontrolled garbage dumps, to be able to convert them into Theme Parks or Leisure and Consumer Conglomerates through speculative operations on the territory.

“The residual space is the result of the abandonment of a previously exploited land. Its origin is multiple: agricultural, industrial, urban, tourist, etc. Residual space is synonymous with vacant land. In urban sectors, they correspond to land awaiting be assigned, or pending the execution of projects that depend on budgetary provisions or political decisions. Delays, which are often long, allow a wooded cover to emerge on urban vacant lots (residual space forests) which are a privileged refuge for biodiversity in those strongly anthropic environments: the Third Landscape constitutes a territory for the numerous species that do not find a place elsewhere. “

They are territories that they evolve, without human intervention, towards secondary landscapes governed by an effective vital dynamic. When they are young, they easily host pioneer species that, before disappearing, prepare the ground for the arrival of other increasingly stable species, until a balance is reached. Then secondary forests appear, heterogeneous and chaotic spaces that make them privileged places for the conservation of life. “The sum of the residual spaces constitutes, par excellence, the territory of the planetary hodgepodge … The borders of the Third Landscape are the borders of the Planetary Garden, the limits of the biosphere.”

Les Moles is a good example of this Third Landscape with all its richness and potential if we adopt a new cognitive and sensitive perspective according to the challenges that the current crisis of civilization is leading us to.

The Dictionary of the Spanish language briefly defines the word “secarral” as “very dry land”. But the drylands, speaking in terms of ecology and biodiversity, harbor positive and significant surprises that have not been valued in their proper measure until now, in part due to the pejorative aspect that the meaning of this word has taken, generated from productivist concepts of the territory and increased by practices of abandonment and uses such as landfills that turn them into lots waiting for urban projects.

We abhor the “landscape” conceived only as a painting or a photograph or a fixed scene with two planes and many colors. The landscapes of secarral have a back stage deep, with dynamic actors in space and time that, in their blindness, sometimes self-interested, are unable to admit the competent administrations that should ensure their protection. On the other hand, the valuation of a landscape has a subjective component, difficult to appreciate by those people who have never wanted to be part of it.

The place of Les Moles de Paterna (Valencia), a green corridor that joins the Serra Calderona with the Mediterranean, in the heart of the metropolitan area of ​​the city of Valencia, constitutes a unique natural space of 470 hectares, scrubland, pines, riverside vegetation in ravines, olive groves and carob trees. It fits perfectly into Giles Clement’s concept of “third landscape” surrounded by road structures, shopping centers, industrial estates, housing estates and housed a maneuvering and firing range for the Ministry of Defense. In addition, the semi-arid climate and skeletal soils of some of its games make it a dry land, like so many others existing in the Spanish geography.

The plant biodiversity de les Moles, which wetlands would like, is very important both in quantity and quality: Iberian-Levantine plant endemisms, some of them exclusively Valencian, species protected by the Valencian Government and the International Union for the Conservation of Nature, recently described subspecies from specimens present at Les Moles.

Climate change has revealed the great importance of the plant species that populate the drylands, since they are the species of the future if the general temperature and precipitation variables continue in the same direction, close to those of the spaces that, for others causes, show in their climate charts from which meteorological data is collected.

Regarding the fauna, the communities of invertebrates, especially insects, small mammals and birds stand out, taking advantage of the great abundance of dry grasslands and grasslands where seeds abound as food.

We consider these lands true natural laboratories for the study of the adaptation of living beings to the harsh climatic conditions that we have to face and we vindicate the great natural, cultural and social values ​​of these spaces. We also contemplate the convening of a “First Congress on Secarrales” so that the scientific community and other groups recognize their importance and cease to be considered only plots or wastelands waiting for asphalt and cement. It is our particular commitment to a sustainable world.