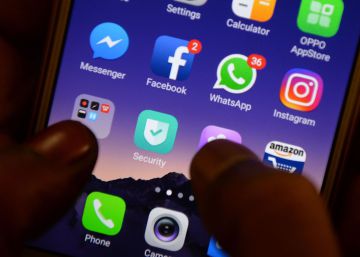 The teacher came as a substitute to the center and created a WhatsApp group between his students of 15 and 16 years. According to the Civil Guard, that was like an extension of the classroom, in which he gave free rein to lessons far from the agenda: the consumption of alcohol and drugs, in addition to conversations that the agents define as "of a sexual nature". Before going to the institute where he was denounced, in the region of A Costa da Morte (A Coruña), he had already made a pilgrimage to other centers in Galicia supplying other teachers. In its didactic chat posted videos showing supposed alumni of his consuming narcotic substances, and according to the testimonies gathered by the Vimianzo Civil Guard investigators, the professor came to offer himself to the boys to get them drinks and marijuana, as he said he already did with pupils from other areas.

An official spokeswoman for the Civil Guard explains that the man has not been arrested or declared yet because "whenever he was contacted, he alleged medical leave." The declaration will take place, directly, "in court" now that the armed institute has filed the complaint for alleged crimes against public health and documentary falsification. The post of Vimianzo began to pull this thread in March, when from one of the educational centers of the region (that the agents do not need to protect the identity of the minors) they warned of "complaints" by the "malpractice of a teacher". As reported by the institute, the content of the WhatsApp group "consisted of images and conversations that referred to and advocated the consumption of narcotic substances, as well as conversations of a sexual nature."

When the Civil Guard agreed to these conversations between the professor and the students, he verified that there was "shared audiovisual material" and that "in some of the videos the teacher showed supposed students from other centers in which he had exercised, smoking psychotropic substances in your home"

"This behavior was not only produced via social networks," the researchers say. After collecting the testimonies of the adolescents, the agents found that the teacher "during the school hours, established conversations of a sexual nature with the minors" and "came to expose the possibility of obtaining alcoholic beverages and marijuana," something that, they declared the boys, assured "to do with their previous students".

Behind this last trail, the Civil Guard requested the collaboration of the Department of Education of the Xunta de Galicia to access the different educational centers in which he had exercised the investigation. The schools were distributed throughout the four Galician provinces, always with short stays "for different work absences", but in a center of the province of Lugo, the students had told the professors facts similar to those investigated in A Costa da Morte. As it happened on this last occasion, according to the agents "when the center's director opened an investigation, the teacher was absent alleging different medical losses."

Then it was when they began to investigate these labor absences, which have led to the second charge, for a crime of documentary falsification. The Civil Guard contacted the different hospitals from which the certificates were supposedly issued, including one from Asturias, and "some of them were found to be false". The investigators recall that the Criminal Code "qualifies as a crime the promotion, favoring or facilitating the illegal consumption of toxic drugs, considering that these facts are made by a teacher or educator in the exercise of their profession." The investigations are still open, because the agents believe that there may be "more minors affected".