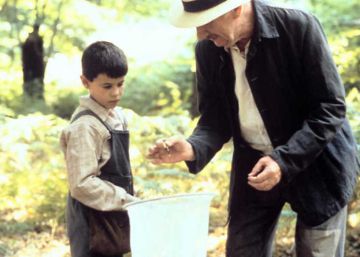 In Galician it is called avelaíña To the butterfly of the night. It is the one that goes around the mystery of the light bulb until it goes out. Lewis Carroll wrote: “I would like to know what color a candlelight is when it is turned off.” That wants the avelaíña. Manuel Rivas (A Coruña, 62) grabbed that metaphor when his children, Sol and Martiño, stayed at school, and he began to write in a village called Urroa on the one hand and Irroa on the other (“means root and return to the water ”), the most important story of his life, The tongue of the butterflies.

Among rocks, “where the road ends” of the Coruña sea, Rivas began to tell the story of a Republican master determined to teach his students what the butterfly language was like. It was necessary that a microscope arrived at the school and the Civil War arrived. That image of the child stoning the teacher, driven by the excited anger of the people, was later taught by the film that José Luis Cuerda made with the wicker of that and other stories that constituted What do you love me, love the book of Rivas in which that story appeared that marked the fate of his later works.

Cuerda was helped by the producer Fernando Bovaira, Rafael Azcona, who joined that and other stories in the book, and Fernando Fernán Gómez, that could be, as they said then, “both the teacher and the child” in the movie. The teacher was finally scared of the stoning, a metaphor for the idea of ​​the Republic buried by hatred even before the river of blood and stones that was the war began.

The story was enlightenment. The Avelaíña. “From the beginning,” says Rivas, “an end vibrated; now I know. But when I started writing I had no idea of ​​that ending. In the story, by name, only that butterfly appears, Iris, a wonder that usually perches on manure and fights to train in the task of seeing the light in the darkness of the day … That morning I had a avelaíña in the head, knocking nonstop, restless. ”

The writing, a will that lasted exactly until the boys were leaving school, had the microscope as a starting point, but that microscope was not going to arrive. “The words were put in suspense. The avelaíña hit, hit. There was no microscope, and the process of discovering the mysteries of nature was going to drift into the human abyss: terror beyond terror. ” That’s where the child, the stone, the teacher’s stupor, the ax that destroys the light come. The finding was told, as if it were written “walking cross country through memory”.

Like a wanderer … “It is the walking that remembers, the one that reopens the blind passage in the undergrowth.” The fortune telling of the past that travels a mysterious path and stops at the head of a poet who writes in the village. “The past that moves us, that unbalances us, is not properly a past: we see it as a remembered present.”

It’s a filament, just a word, avelaíña, or butterfly, and suddenly it’s a movie and poster, writing of others about something that was born to him when the children were in school. “The characters in the story for me immediately had the faces of the performers. I see the teacher as Fernando Fernán Gómez. And to Pardal, the boy, like Manuel Lozano. I always tell Cuerda that what he did was a transmigration of souls and it’s true. ” Among the many times he saw The tongue of the butterflies Around the world remember one in Caballito, a neighborhood of Buenos Aires. They did not know who he was, the head that originated the metaphor that was already a film image. “When finished, people hugged. Long hugs, as if protecting yourself from the defeat of humanity. And I also remember that old Iranian exile, in East Anglia, in England, who exclaimed in shock: ‘I am the teacher!’

The story appeared in 1994 in Galician and the following year the Spanish version ended up inspiring Cuerda, Azcona, Bovaira and since then millions of spectators of the filmed history. To explain what originated this communion between the idea and the symbol to which Rivas gave birth to the Galician poet, he uses a Portuguese phrase Miguel Torga on the universal as “the local without walls.” The stories of What do you love me love “They have,” says Rivas, “that condition of the universal place … On December 4, I had a working day with 180 high school teachers in Paris. It will be a reading book for students in France. I’m glad that reexistence. ”

Pardal throwing a stone at the teacher. To end the light, to amputate the tongue of the republican butterfly that obsessed Rivas while the boys were still in school.