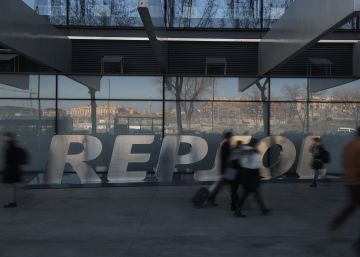 Repsol obtained losses of 3,816 million euros in 2019, as a result of the adjustments made to lay the foundations of the new strategic orientation of the company, which has been marked as a goal of zero emissions in 2050. The result, which compares with the 2,341 million reached in 2018, fundamentally reflects a correction of 4,849 million in the book value of some assets, made after assuming new scenarios of crude oil and gas prices consistent with the climate objectives of the Paris Agreement. To these provisions must be added the 837 corresponding to those destined to deal with the possible impact on the accounts of claims of the Chinese Sinopec to its Canadian investee Talisman.

Repsol announced on December 2 those goals, which makes it the first of its sector to set this ambitious goal of fighting global warming according to the objectives of the Paris Agreement, aiming at not exceeding 1.5 degrees Celsius with respect to pre-industrial levels. In achieving this objective, the company expects a progressive reduction of its carbon intensity indicator based on 2016: from 10% in 2025, 20% in 2030 and 40% in 2040, to move towards zero net CO2 emissions in the year 2050.

The adjusted net result, which specifically measures the company’s business progress, reached 2,042 million, compared to 2,352 million in the previous year. According to the company, this figure, obtained in a context in which oil and gas prices decreased significantly and in which lower international margins were registered in industrial businesses, reflects the strength and capacity to generate value. The company increased its operating cash flow by 8%, to 5,837 million.

The flow generation allowed the Board of Directors to agree to the next General Meeting to increase the remuneration to the shareholder through a 5% amortization of the share capital as of December 31, 2018. It will add to those that can eventually be done on the occasion of the different scrip dividend. In line with that, it is expected that before the General Shareholders’ Meeting, which is expected to be held in May, a share repurchase program linked to the 5% reduction of share capital is launched.

The decision adds to the agreed improvement for the dividend which, with an annualized increase of 8% compared to 2017, will reach 1 gross euro per share in 2020 under the scrip dividend formula and the corresponding capital reduction to avoid any dilution.

The Downstream area (Refining, Chemical, Mobility, Lubricants, LPG, Trading, Gas Wholesaler, and Repsol Electricity and Gas) had a result of 1,456 million, compared to 1,583 million the previous year. The area showed its strength in an exercise in which it had to face a weakening of the industrial margins, while Trading, Peru, Mobility and Lubricants, improved their performance, which was joined by a positive contribution of the Electricity and Gas business.

During the year, the company continued its growth in the area of ​​electricity and gas, exceeding one million customers, while incorporating new renewable generation assets. Repsol has established itself as a relevant player in the generation of low-emission electricity, with a total installed capacity of 2,952 MW and ongoing plans that will add 1,185 MW. In addition, the company increased its target of low carbon electricity generation capacity by 2025 to 7,500 MW, which represents an additional 3,000 MW compared to its previous target. To this is added the beginning of the expansion in other markets to become a relevant international actor in renewable energies.

Repsol continued taking steps as a reference in mobility and acquired the electric recharge network and the energy commercialization services of Ibil, together with the assets and contracts associated with these activities. This transaction consolidates Repsol’s commitment to the development of future mobility, in which it plays a key role as a leader in the supply of energy for this area in Spain.

The Upstream area (Exploration and Production) obtained a result of 1,050 million, compared to the 1,325 million it reached in fiscal year 2018. The business showed its adaptability and flexibility to face a context of lower crude oil and oil prices. gas. Repsol’s production reached 709,000 barrels of oil equivalent per day, in line with 715,000 barrels of the previous year. The incidence of interruptions in Libya was mitigated by the obtaining of new barrels from the connection of wells in Marcellus (United States), Duvernay (Canada) and Akacias (Colombia), and by the active management of the portfolio, which included the acquisition Mikkel (Norway) and Equinor’s participation in Eagle Ford (United States).

To this was added the start of production in Buckskin, a project located in the US Gulf of Mexico and that in its initial phase reached a volume of 30,000 barrels of oil per day. Its implementation was achieved months ahead of schedule and with a cost reduction of more than 40% compared to the original project.

In the exploratory activity, the discovery made in the Sakakemang block in Indonesia stands out, considered one of the largest in the world in the whole year 2019. It is also the largest gas discovery of that country of the last 18 years, with a preliminary estimate of at least 2 billion cubic feet of gas (TCF) of recoverable resources, equivalent to two years of Spain consumption.

In order to achieve the decarbonization objectives established by Repsol, the Upstream area will direct its portfolio to the fulfillment of the Paris Agreement, and will prioritize the generation of value over production growth, maintaining flexibility as the strategic axis of the business, focusing on the rotation and improvement of the portfolio of assets and in cash generation.

The company will maintain the balance between oil and gas reserves, with a vision of gas as energy for the energy transition, and also taking into account the active role that oil must play in a more decarbonized world.