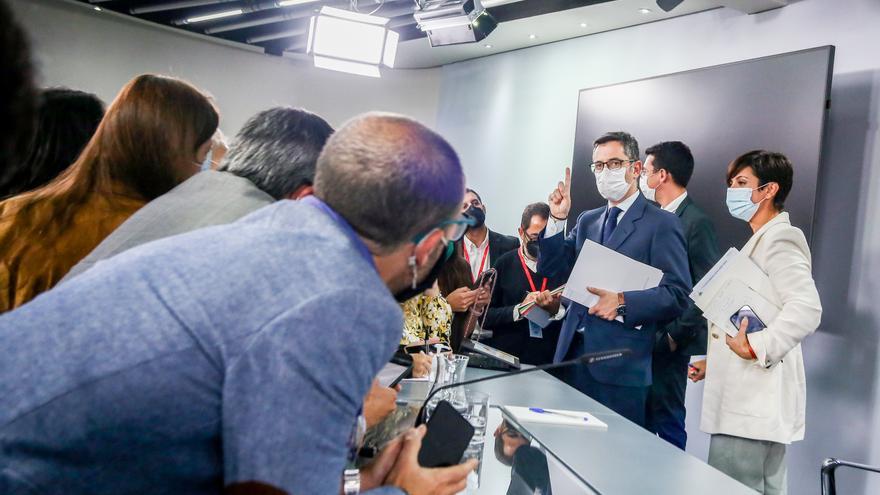 There are times when the right leaves the ball bouncing so that the left can mount their electoral campaigns. Take as an example the measures agreed by the PSOE and United We Can to try to reduce the price of rents in urban areas where prices have skyrocketed in recent years. The deputy mayor of Madrid confirms that the city will continue to be a kind of real estate tax haven for investment funds to continue buying apartments whose prices will increase to increase their profits: “The legal security we offer it will make us continue to be a refuge for foreign investment. We will be even more competitive. “Más Madrid launches a tweet to attack the mayor explaining” what Almeida will do to regulate rental prices in Madrid, “along with a sign that says in capital letters:” NOTHING “. The mayor responds with one word: “Exact”.

In Madrid, rental prices they have risen three times higher than wages since 2008. Nothing to disturb Almeida.

In Telecinco, they ask Pablo Casado about the issue and his answer indicates to what extent he is not concerned about the situation of people who pay excessive amounts for housing areas or must allocate more than half of their salary to a more dignified apartment. “If you have a job and a payroll, you can get a rent,” he says. The leader of the PP has not heard of job insecurity nor has he ever had financial problems. It is a world unknown to him. Nor is it that he knows much about the powers of governments in economic policy: “We are in favor of people doing what they want with what is theirs.” As if governments did not take measures – for example, tax – on what you can do with your money, the one you receive as salary.

Casado is counting on his voters to believe that they live in a non-existent neoliberal nirvana. Other days he says that we suffer an authoritarian regime that curtails freedoms. Consistency is not its strong point.

The debate over the prices of buying or renting a home is one of those that allows big promises and a few lies. In the first place, because of its complexity and because the history of price control shows an uneven balance. The cause-effect relationship of the measures is difficult to define a priori. Governments can establish a regulatory framework – in fact, that’s what they do – and then the decisions of millions of people, each with their own needs and aspirations, come into play.

It is not strange that, in addition to a social good, it is an investment good, or a speculative one if we want to harden the concept. Of course, it is not the same that there are families who want to invest their money in brick before buying shares in the Stock Market than that of an investment fund that wants to take over a portfolio of thousands of homes because it sees immense possibilities for capital gains. The second did not happen long before in Spain. Now yes, and that has created new problems, in which city councils such as Madrid have collaborated due to its 2013 decision to sell 1,850 public homes to two Blackstone fund companies.

The very scant interest of the socialist ministers to enter into a reform of the rental market led United We to redouble its pressure and warn that the agreement was essential. The lever was budgets. Otherwise, Pedro Sánchez should assume that he would have to extend the current public accounts. Months ago, the PSOE removed the issue from above with a unique offer made by José Luis Ábalos: to favor tenants in a vulnerable economic situation, it was proposed to favor the owners of the flats through more tax deductions. With the existing ones, not much had been achieved. Podemos considered it a joke and the PSOE went to the corner of thinking.

The agreement finally reached has left very satisfied to Podemos, so much that it has bothered to Gabriel Rufián. It affects the idea of ​​acting especially in “stressed” areas, because the problem does not affect all Spanish cities equally. The trap – or simply the reality – is that the powers are in the hands of the autonomous communities, and to a lesser extent of the municipalities (read the increase in IBI to empty flats). If the CCAA refuse to take the initiative, the thing remains in nothing or very little.

Íñigo Errejón immediately showed his discomfort at this limitation: “Some good measures to guarantee the right to housing cannot be ‘optional’ for municipalities and autonomous communities. “He fears that they will not be applied in half the country, and that is exactly what is going to happen. Spain is an autonomous state for everything, for which we like it and for the rest. “We are not going to accept an invasion of powers,” said Alberto Núñez Feijóo, who for the moment only knows about the future law what he has read in the media. This is what the Basque and Catalan with reforms that affect autonomous powers.

Among the announced measures, there is nothing that resembles the model of Euskadi, where the Basque Government manages a public park of 25,000 homes for rent. Does that mean that there are no economic problems of access to housing? Of course there are –The prices in Bilbao and San Sebastián are among the highest in Spain–, but the Autonomous Administration can at least manage a rental access system that is in a position to benefit young people.

The measures are more direct in the case of the so-called “large holders” who have at least ten homes owned, basically companies and large fortunes. This is another matter that opens possibilities for future electoral campaigns. The PP knows this and will apply the idea that all this is against the elderly rentiers who rent one or a few flats. Casado defined them in these terms: “You have an apartment that you have saved throughout your life with a mortgage because you want to leave it to your children, and the Government tells you what price it has to have.”

What is known about the law does not have much to do with the loving and generous old man with his children that Casado has invented, but with large corporations. It will be up to the government parties to make it clear who they want to defend and who should go through the box. But the PSOE likes to eat at all the dishes and will say that in no case is it against the irruption of investment funds in the housing market, that is not going to stop growing. How do you get that? Including an 18-month moratorium in your case.

It is clear that we will see you in the next campaign to continue talking about the issue.