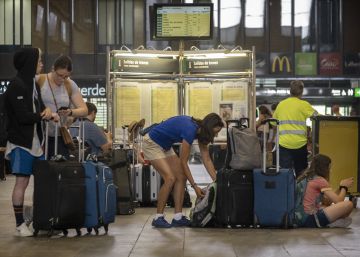 Renfe will suppress this Thursday, December 5, the circulation of 155 trains, 28 of them AVE and Long Distance, as a result of the strikes called by the CGT union for this day, which coincides with the operation leaving the bridge. This is stated in the resolution of minimum services issued by the Ministry of Development, which amounts to 11,550 travelers who will be directly affected by the cancellations, 6,300 users of the AVE and another 5,250, of regional trains.

This union regularly calls this type of stoppages every year, coinciding with massive passenger movements such as holiday departure operations or bridges. Although the monitoring of these strikes is minimal (less than 3% of the workforce is seconded, according to the company), the minimum services decreed by Development cause extraordinary damage to thousands of travelers.

Precisely, CGT has planned a strike of 23 hours on the 20th, on Christmas Eve, to denounce the "privatizations and outsourcing" that it considers are being carried out on the railway and the "lack of personnel" of Renfe and Adif for the retirement of his "aged templates".

Given this mobilization, Fomento has dictated minimum services that guarantee the circulation of up to 90% of the usual trains, to ensure transport in a day of "exceptional movement of travelers" in which "the mobility of a working day coincides with the beginning of the bridge and, in addition, the celebration of the Climate Summit in Madrid ".

In spite of this, Renfe, in addition to not being able to reinforce its service as usual on days of greater mobility, must abolish trains that are not included in minimum services.

Thus, by type of train, in the AVE and Long Distance the minimum services guarantee the circulation of 90% of the usual trains, that is, about 265. The remaining 28 will be canceled and your 6,300 travelers will have to travel in other or other day, according to the resolution of Promotion.

In the case of the Media Distancia trains (regional), the circulation of 215 is guaranteed, 62.8% of the usual offer, which means suppressing 127 frequencies that will affect about 5,250 passengers. This number of people affected does not include those who finally travel by bus or other modes, which raise up to 24,284 the total number of passengers affected by canceled regional trains, at an average of 192 users per train.

Regarding Cercanías, the resolution does not include an estimate of affected passengers, but establishes as minimum services 50% of the usual frequencies, 75% in the 'rush hour', in the case of Madrid. In the rest of the half a dozen capitals that have this transport, 48% of normal circulation is guaranteed, 66% in rush hour.

In Merchandise, Promotion guarantees the circulation of 56 trains, 35% of the total, with which 219 will be canceled, to avoid having to stop factories due to lack of supplies and that their transport is not diverted to the roads on an intense day circulation.