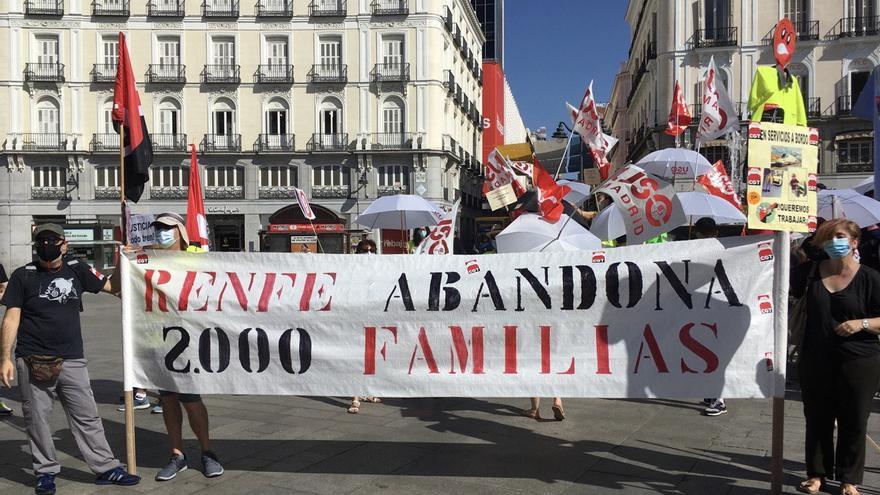 A hundred Renfe workers demonstrated on Monday at the Puerta del Sol in Madrid to denounce their situation “aimlessly.” Despite the fact that the operator is gradually recovering its normality and offering long-distance tickets and AVE, the logistics and service workers on board — those who load the food on the train, attend to the cafeteria and to the passengers along the way — continue to be involved in an ERTE until January 31.

“We see that the frequencies are increasing,” explains one protester to eldiario.es. “As long as everything is reactivated, they keep us apart for reasons we don’t know.”

The sequence has been as follows. Renfe subcontracts the on-board service to Ferrovial. It is a large contract, around 400 million euros for five years. The contract ended on March 30. Despite the fact that the specification was prepared and several companies were bidding on it –Ferrovial, LSG and Newrest– the pandemic caused Renfe not to close the award or extend the previous contract. Ferrovial announced that it would do an ERE, met with criticism from the unions and, finally, reached an agreement with Renfe to extend it until January 31, 2021. The workers have been in an ERTE since the state of alarm began.

The theory was that they would return to their posts as service recovered. The transport minister, José Luis Ábalos, assured two weeks ago in the Senate that this would be the case. But the reality, the unions denounce, is that there are only 70 active workers out of the 2,000 that are.

“No one is going on the trains, only the driver and an intervener,” they indicate. Part of their work is now done by that controller or the ‘check-in’ staff.

“In addition to catering on board, we accompany minors, we are spread out on the train in case it needs to be evicted and we have training in first aid for incidents,” says Luis Miguel Zabala, USO trade union delegate. “Nobody is doing that job.”

Unions are not just protesting their current situation. They also demand a plan for their future. “ERTE until January 31 does not guarantee a return,” adds Zabala. “It is like lengthening an announced death.”

Ferrovial has informed them that Renfe is going to launch a new tender in July, but they suspect that it will be “down”, which would mean destroying jobs or lowering their conditions. That of Tuesday has been its fourth demonstration in Madrid, after concentrating in front of Congress, the Renfe headquarters and Atocha. “In that fight we continue, so that the Government guarantees its words to us that they are not going to leave anyone behind,” ditches Zabala.