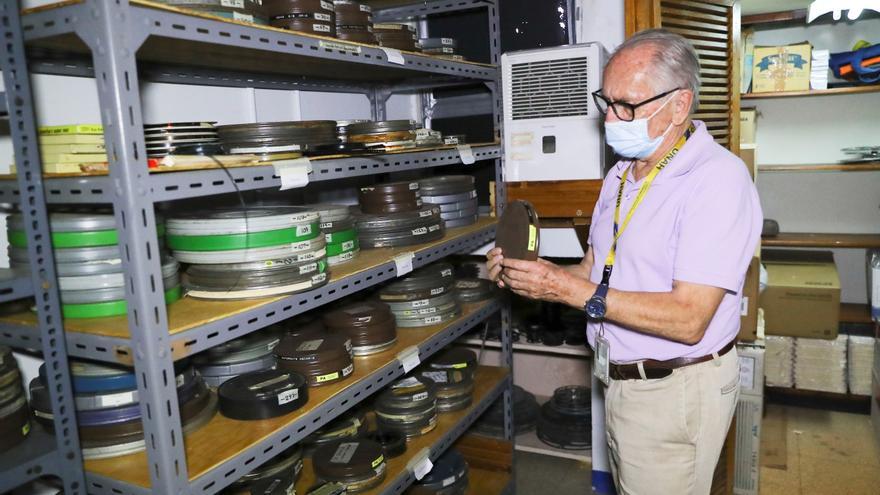 Tegucigalpa, Jun 26 (EFE) .- René Pauck, a French hairdresser who arrived in Honduras in 1973, after being a migrant in Canada, has lived in Honduras for 47 years, where at 80, from the Cinematheque of the National Autonomous University (Unah), works to rescue the historical memory of the Central American country.

“I was in the 70s as a migrant in Quebec, Canada, I was a hairdresser, but an amateur filmmaker, a movie madman, with a camera and everything,” René told Efe from the Unah Cinematheque in Tegucigalpa when he remembered how he came to give to Honduras as a “volunteer”.

In Quebec, where René had a hairdresser for women, with his first wife, he lived from 1965 to 1973, but in recent years the relationship did not go well and in the end there was a divorce.

A CUSTOMER TAKEN HIM ON AN ADVENTURE TO COME TO HONDURAS

Born in Nancy, in northeastern France, where he was born on October 1, 1940, René recalls that at the hairdresser in Quebec he met a client who had a son who worked with the Pastoral Caritas of the Catholic Church in Honduras, which it marked the beginning of his relationship with the Central American country, which gave him a new home: his wife, Olga Mendoza; two children and four grandchildren.

After his arrival in Honduras, after two years, he ended a project directed by him, to “organize the social work of Caritas.”

René came to Quebec as an adventurer who wanted to do “new things”, despite the fact that the “very modern” hairdressing business was doing well.

For him the work of a hairdresser was not enough and he kept giving thought to his idea of ​​getting more involved in the cinema, so as not to continue being an amateur and that his “crazy things” were not only picked up with his small and old camera, which he still has.

He came to Canada when a major “cultural explosion” was emerging in Quebec, in which there was also a lot of film activity, which largely fueled his passion for cinema. Another of his dreams as a child was to sing opera, which he had done but “only in choirs.”

After his project with Caritas, he worked for several years in the Secretariat of Culture, Tourism and Information (Sectin), which had been founded on July 1, 1975, in one of the last stages of the military regimes that Honduras had. There, with other young Honduran filmmakers, they shaped the Film Department of the new Secretary of State.

Between one job and another for René, the troubled 1980s arrived in Central America, in the middle of the Cold War, with internal armed conflicts in Guatemala, which had already been at war for several years; the emergence of the guerrillas of the Farabundo Martí National Liberation Front (Fmln) in El Salvador, and the Sandinista National Liberation Front (Fsln), in Nicaragua, which in 1979 overthrew the dictatorship of Anastasio Somoza.

Part of the war in Central America, camera in hand, René toured it covering what was happening, “walking at night and hiding by day”, of what among other things recalls a production with a Canadian team entitled “Peace yes, war no” , on a journey from Panama to Mexico.

In the 1980s, René alternated his work with a video production company and other documentary works.

“All my life has been exciting, I have made a number of institutional documentaries for the Government and my own, I have worked with filmmakers from here and I was on the war front in the 80s. So what can I ask of life, yes? Life has given me everything I wanted and it is still giving me a lot, “said René.

THE CINEMATECA OF THE UNAH

The filming of so many productions in Honduras and Central America, with teams of European, Canadian and United States producers, was enriching René’s dreams of producing, filming, directing and everything that a production implies, which the filmmaker sums up and values ​​as its “true school”.

The last two decades of the last century and the first three of the present, René worked with international organizations.

Towards 2014, the journalist Manuel Torres, who was one of the members of the Board of Directors of the Unah, suggested the creation of the cinematheque of the maximum house of studies, a project that its then rector, Julieta Castellanos, also wanted.

Torres, who with Castellanos, separately, promoted the dissemination of alternative films for Hondurans, proposed René to direct the cinematheque, on which there was consensus and that is how the French hairdresser came to the position he has held for seven years.

In a space that will surely have to be expanded, the “Enrique Ponce Garay” Cinemateca de la Unah operates, the name of a renowned Honduran film critic, who died in July 2006.

The Unah Cinematheque has been enriched with dozens of film and video productions in different formats; raw material, cameras, projectors and other equipment, among donations and purchases, which were owned by Honduran filmmakers such as Sami Kafati, Fossi Bendeck and the Marcos and Jorge Asfura brothers, among others.

The visual historical memory of the country continues to be published in the Unah Cinematheque with film and video material since the beginning of the 1940s.

René, thanks to an Italian friend, also fulfilled his dream of singing opera not only in choirs, while one of his two Honduran sons, Camilo, who has also followed in his father’s footsteps, is studying film in France.