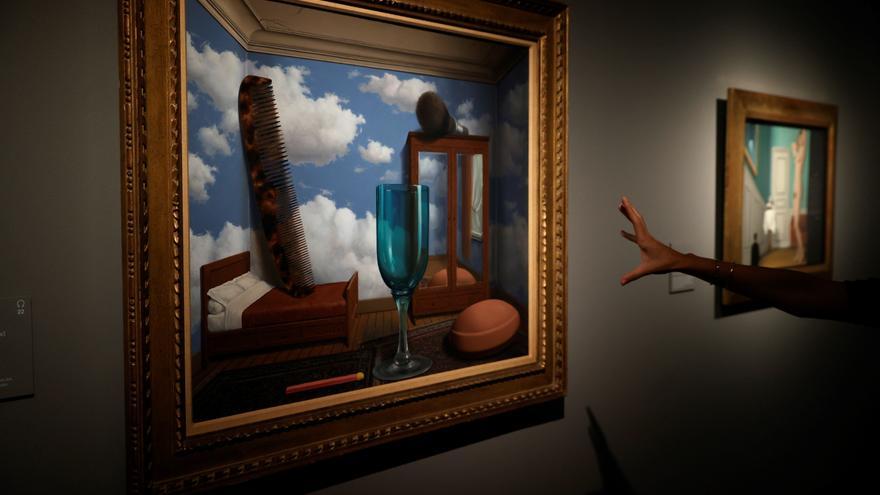 Madrid 13 (EFE) .- René Magritte (1898-1967) is one of the most popular artists of the surrealist movement, but his dedication “to delirium and absurdity” overshadowed his rigorous work. “There is method in his madness”, summarizes Guillermo Solana, director of the Thyssen-Bornemisza Museum and curator of the exhibition that this center opens today.

Pipes, apples, men with bowler hats and other elements are relentlessly repeated in Magritte’s work, which is becoming more and more popular among the general public thanks to advertising and cinema.

Solana did not want to reduce the sample of the Madrid museum to a discourse around these everyday objects that he repeated ad nauseam. Magritte, Solana argues, is more than its own repetition and this show is an attempt to represent “the artist’s imagination behind the scenes.”

The common thread is a hundred pieces from all over the world -from Japan to the United States- and with the collaboration of the Belgian artist’s foundation. It can be seen from tomorrow to January 22 at the Madrid museum.

The difficulties in making the exhibition have been many: first it had to be canceled due to the pandemic and, later, the popularity enjoyed by the artist is such that it was impossible to collect the works they had in mind, so the museum was forced to postpone it again.

“Magritte is in high demand. It has reached a popularity comparable to that of Dalí -according to Solana-. He is one of the most coveted artists of the 20th century ”.

The museum has been behind this exhibition for half a decade, the first in thirty years to be held in Spain and which is undoubtedly a star on the autumn calendar.

The surrealist master conceived his work as an artist “as that of a magician”, an illusionist “with a great repertoire of tricks” and this is how it can be seen in the first room, where “The powers of the magician” hangs, along with works by his early years and numerous self-portraits.

In “Tentative of the Impossible” (1928), the painter portrays himself painting a naked woman, she is a half-made product of his imagination, he of flesh and blood.

Later, the visitor enters “Image and word”, which deals with the mixture of writing and painting; “Figure and background” with numerous trompe l’oeils, and other rooms such as “Picture and window”, “Face and mask”, “Mimicry” and “Megalomania”, which examines the most important tropes of the artist’s work.

“Magritte is complicated, when you think you’ve caught it, it escapes you,” says Solana, who highlights the irony in the Belgian artist’s work. This is undoubtedly one of his hallmarks and the element that differentiates him from the French surrealists, who took themselves much more seriously.

“Magritte kept the rebellious spirit of Dada until the end,” he explains.

Through the exhibition you can see many of the winks that, for many critics, have made him a forerunner of pop art, which came a few years after his death.

The painting “Perspective: Manet’s Balcony” (1949), in which a group of coffins look out from a balcony, reflects a “parodic attitude towards art history” that Andy Warhol himself could have done.

In numerous works you can also glimpse the influence that Lewis Carroll and his main work, “Alice in Wonderland”, had on the artist’s work, which increased or decreased the protagonists of his paintings at will, just like the English writer with his protagonist.

An apple, a rock or a gigantic rose take center stage in several of his paintings, while in “Delusions of Grandeur” the torso of a woman is divided into three parts fitted together as if it were a telescope. The image is from a passage from Carroll’s work.

The exhibition is completed with a selection of photographs and films by Magritte, two disciplines that the artist cultivated in his spare time, and which were discovered in the mid-1970s.

The exhibition will travel on February 24, 2022 to Barcelona, ​​to the LaCaixa Foundation, where it will remain until the summer