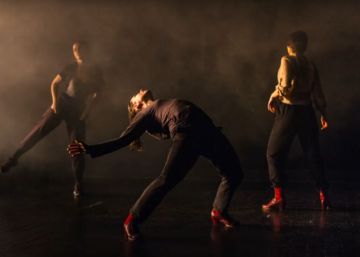 Reborn: It could be the sign of this new time. After the closure, the return to life. That is precisely what the new show by the company La Tristura is about, Renaissance, It was created before the pandemic broke out, but it seems that they just thought about it. Its presentation was scheduled for April 17 at the Madrid Canal Theaters and has now become the first major premiere of the post-confinement era in the city. It will be a coincidence, but there could not be a better montage to mark the return to the stage: not only for its theme but also for the pleasure it gives to see hugging and touching so many people on the stage, no less than twenty-five, most of them quite young and of contagious joy.

But possibly its surprising fit with current reality does not have to do with chance, because good works always speak of the present even though they were written four centuries ago. The show actually begins with one of Shakespeare’s most famous phrases: “My kingdom for a horse.” It is the last thing King Richard III says before he died in the Battle of Bosworth, in 1485, which marked the end of the Middle Ages in England to usher in the Renaissance. The beginning of a new era for humanity. When the scene ends, applause sounds and we realize that we are not attending the performance of Shakespeare’s play, but that of another that takes place in 2020 and whose protagonists are the technicians who work in a theater and who have to disassemble the scenery of the show, all of them born in the eighties, along with Spanish democracy.

The work thus establishes a triple analogy between the Renaissance as a historical and cultural stage that ended the dark Middle Ages, the dismantling of the theatrical scenery to make way for the next and the arrival of democracy in Spain after forty years of dictatorship. To which is added a fourth that was not in the original intention of the creators of the work but that is perhaps the most powerful of all because it is born spontaneously in the mind of the viewer: the sensation of rebirth after the months of confinement by the pandemic.

These analogies are underlined both with projections of poetic texts that recall key moments in the recent history of Spain and in the conversations that take place between the technicians who star in the work. As they dismantle and mount the stage, they include family anecdotes, love and heartbreak, childhood memories and work problems that often underlie the great question that guides the entire show: how much has been lost from that initial and pure impulse What brought democracy to this country? And another: is it perhaps time for a new rebirth?

Deliberately naive at many times, the show is not pretentious, however. Its main value is precisely its simplicity, which on the other hand is a common brand of La Tristura, although this time it lacks a little more dramatic density, especially in the initial scenes. It grows stronger as it progresses, when connections and metaphors are gradually being discovered, until reaching the final climax: a group of women dance to the rhythm of the song People’s Faces, from English rapper and writer Kate Tempest: “They said there is no new beginning / until everyone sees the need to end old ways. / None of this was set in stone.”

It will be naive, but it is just what we need at the moment: to be reborn in the theater.

Tags: be, be reborn, company, conceive, lockdown, new, seem, show, the sadness, theater, to have, to write

Plcido Domingo: “I have not abused anyone. I will repeat it while I live” – ​​La Provincia

More than 3,000 people have visited the Casa de Colón since its reopening

Dance without age and without borders