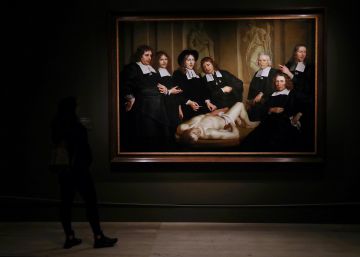 Between 1590 and 1670, there were no less than 130 painters, mostly portraitists, in the city of Amsterdam. They served, unlike what happened in southern Europe, to clients who did not belong to the Church or to the nobility. The city, already converted into a Calvinist stronghold, was a center of power and wealth of middle classes who had made their fortune thanks to commerce or industry. Everyone wanted to decorate their luxurious homes with individual, family or union portraits. Rembrandt Harmenszoon van Rijn (1606-1669) He decided to settle in the capital in 1631, with 25 years and already a notable artist prestige. It was the beginning of a dazzling career that led him to glory in life, but also to ruin and isolation. The Thyssen-Bornemisza Museum open this Tuesday to the public Rembrandt and the portrait in Amsterdam, 1590-1670, ambitious exhibition dedicated to the genre during the Dutch Golden Age, with a hundred works, 39 of them from the genius, from museums and private collections around the world, with a bulky state guarantee (437 million euros), due to the high value of the pieces.

Distributed in nine rooms in chronological order, the hundred works gathered try to be a complete narration of the top reached by the genre of the portrait over a century with the work of Rembrandt always being measured with that of his contemporaries. The curator, Norbert Middelkoop, defines the essence of Rembrandt’s portraitism: capturing the character of the portrayed (payer of the work) beyond his physical features.

In their case, they are men and women who look at the viewer from a background of chiaroscuro and, always, give an idea of ​​the power of the subject portrayed. These clients reside in spacious and luxurious homes and move inside guilds or brotherhoods whose walls have to be clear who they are. Middelkoop has dedicated the last decade of his research to the name of the people portrayed, a task still unfinished, thanks to which progress is made in the biographical study of the works.

In the first part of the exhibition, Rembrandt confronts those who ruled in the portrait market before he arrived in the city: Cornelis Ketel, Cornelis van der Voort, Werner van den Valckert, Nicolaes Eliasz, Pickenoy and Thomas de Keyser. In the following rooms, the comparison is made with those who, like him, arrived from other cities to distribute the cake of the incessant demand: Bartholomeus van der Helst, Jacob Backer, Joachim von Sandrart, Jürgen Ovens and Frans Hals.

Guillermo Solana, artistic director of Thyssen, says they have been very careful that the exhibition – which can be seen until May 24 and is sponsored by the Community of Madrid and the company JTI – was not a succession of niches or capsules before The visitor will get bored. To avoid this feeling of repetition, the works are linked so that the viewer sees characters reappear a decade later and what were the links between artists, rivals, colleagues and competitors. “The story of Rembrandt is that of an artist who manages to reach the top due to customer requests and to surround himself with artists who begin as disciples but eventually end up displacing him on the whims of the moment. Theirs is a story of ascension and fall or of splendor and decline. ”

That personal, non-artistic decline is seen in the last two rooms of the exhibition. While the clients want to be portrayed in suggestive poses showing luxurious clothes and with academic techniques, Rembrandt, in full depression for the death of his mother, his wife and his son, continues to extract the character of the portrayed, sometimes in its more gloomy version and unpleasant with the market.

The tour closes it with a small room in which 15 engravings provided by the National Library are concentrated and show the essence of the portraitist Rembrandt. There is included one of the jewels of the sample: the fragment of a small preparatory drawing of Anatomy Lesson of Doctor Jan Deijman, work that was badly damaged during a fire in 1723. From that drawing it is possible to recreate what was the original composition.

In an earlier version of this article the caption of the main image assured that it was a Rembrandt when it was actually The anatomy lesson of Doctor Frederik Ruysch (1683), by Jan Van Neck.