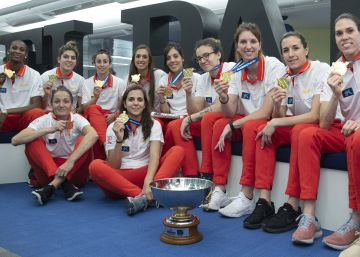 The women's basketball team was born in 1963 and took three decades to win its first medal, the European one of Perugia. From 1993 to 2013, the collection added seven medals in 20 years. The same as in this thrilling golden age of seven consecutive podiums crowned, at the moment, with the historic conquest of Belgrade against France on Sunday. A stratospheric trip. "We are stretching and stretching the cycle in an incredible way. I do not know if people are fully aware of what we do. It's a total, "he said. Laia Palau, about to turn 40 and captain of the most veteran team of the tournament, with 29 on average. A fact that does not limit the future expectations and reinvention of a group born to win.

"Laia increases the average in everything. The age, but also the quality in an extraordinary way, "says José Ignacio Hernández, coach between 2010 and 2011 and current technical director of women's teams, relativizing the circumstance. "The core of this team is around 30 years old and that guarantees a competitive path. There is continuity and there will also be relief. Gathering as much talent as the current one in the future is complicated, but we trust our system. We have to be optimistic, "adds the technician.

The progressive incorporation of talent from the training categories to bring together the best group of players in its history now allows Spain to have a tiered hierarchy that extends the future. After the captain, Silvia Dominguez and Anna Cruz with 32 years, Laura Nicholls with 30, Alba Torrens with 29, Marta Xargay and Cristina Ouviña with 28, Laura Gil and Queralt Casas with 27 and Astou Ndor with only 24, among the more laureates. "Many were arriving silently and now they are key", continues Hernández.

Contrary to projects like those of France (now in 24 years on average), Belgium (26) and Russia (26), the Spanish strategy does not go through complete reconstructions, which lead to a period of crossing and consolidation, but because of the evolution competitive is adding promises to the ingrained gear. "By 2020 and 2022 there will be few changes in the core of the team. But we are already working on the integration of young talents, "Hernández continues. The FIBA ​​classification windows will be the platform for that plan, making the problem (due to its location in the middle of the season) a double virtue: the filming of the new appearances in international cache games and, at the same time, the rest of the veterans so as not to saturate the odometer.

Among the most promising future names are those of forward María Conde (22 years old and 1.86m), who with 20 already entered the team that won gold in 2017, was in the pre-selection for this championship and does the milli at a good pace in the Wisla of Krakow, and the base Maite Cazorla (21 years and 1.78m), who, after becoming a few months ago the first national player to access a NCAA Final Four will continue her promising career in the Perfumerías Avenue, eternal quarry of the national team, where it will acquire the Euroleague player cache. Among the interior players on the radar, Paula Ginzo (21 years and 1.89m), Nogaye Lo (21 and 1.91m) and Irati Etxarri (20 and 1.86m). It is also expected the re-engagement of Leticia Romero, present in four of the seven podiums of this cycle, between 2014 and 2017, and the use of specific pieces, regardless of their age, as has happened in this European with María Pina.

The more than 30 medals in categories of women's training in the last decade guarantee the reliability of the nursery. On the top step, the Renaissance of the Liga Dia expands the range. "In the world bronze of 2010, which I lived as a coach, the 12 players were in Spain. This year, seven of the 12 will be next season in our League. That multiplies the evolution and the repercussion ", closes Hernandez.

The 'golden minute' was achieved in the last moments of the match with a peak of 3,052,000 spectators at 22.10h. It was the best audience for a women's sporting event in Spain. Figures that far surpass the records obtained in the final of the European 2017 and the match for the bronze of the World Cup of Tenerife 2018. It is the women's basketball game with better data since the final of the European 2013, with less television offer and a greater concentration of the audience.

In global terms, the seven games of Spain in the World of Tenerife reached an average audience of 400,000 viewers in Teledeporte, with peaks of 800,000 in all matches, multiplying the share of the chain from 1 to 4.5%. Then, the efforts of the Federation did not bear fruit for the semifinal and the bronze match to be aired on La1, but the spaces devoted to the women's selection in the TVE TV newscasts endorsed the interest in the championship with 12- 13% The conquest of European gold in 2017, which was televised with the global coverage of La1, gathered 1,370,000 spectators.

The eighth match between Spain and the USA of the Women's Soccer World Cup, which was broadcast through Gol, had a screen share of 12.8% share and was seen by a total of 1,320,000 viewers. Its maximum limits were 1.8 million. The event did not add more than a 4.6% share and 489,000 spectators on average with all the programming dedicated exclusively to the event.