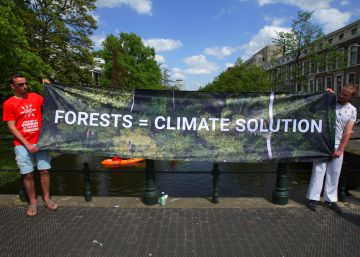 The reforestation can become one of the "most effective strategies" to combat climate change and mitigate the increase in temperatures. It is what concludes a study published this Thursday in the magazine Science which identifies up to 900 million hectares of land that can be converted to vegetation cover. This recovered forest mass would serve to store up to 205 gigatons of carbon dioxide (COtwo), the main greenhouse gas. Human activity causes annual emissions of around 40 gigatons of COtwo. Half of these gases are concentrated in the atmosphere and contribute to global warming; the other 50% is absorbed and stored by oceans and forests. The aim of this study is to try to increase the amount of carbon dioxide that forests capture and to identify, through satellite images, the areas that can be reforested on the planet.

In the last report of the IPCC – the group of experts appointed by the UN to prepare the baseline studies on climate change – already pointed to the fact that forests are a key tool against warming. And it was estimated at 1,000 million hectares (the equivalent to the area of ​​China) that are needed to achieve compliance the Paris Agreement. "We had the doubt of whether it was possible to achieve that goal without sacrificing food production and if there was enough land available," says René Castro, head of FAO's Department of Climate, Land and Water Biodiversity (United Nations Food and Agriculture Organization). "We did this study and found that of the 2,000 million hectares of degraded land in the world, 900 million have absolute forest potential," adds the head of FAO, the agency that has prepared the report with the Federal Polytechnic School of Zurich .

The study emphasizes that those 900 million hectares of potential recovery are not agricultural or urban land, although they do recognize that, not knowing how much of that land is public or private, it is not possible to know the amount "really available". But Castro insists that the study shows that "it is possible to meet the objective of the IPCC and that it would have a very important local impact for the use of water, combating erosion, improving the local climate, and for biodiversity and the creation of rural jobs. " In addition, he argues, this reforestation would offer a temporary cushion to the human being – of about 20 years – to mature the technologies that allow to get rid of fossil fuels, the main emitters of COtwo since when they burn to produce energy they release this greenhouse gas.

Castro argues that the study also offers some hope at a time when global emissions of carbon dioxide and other global greenhouse gases continue to grow. "That reforestation would give us a break," he says.

However, the analysis also contains a warning. Far from heading towards the reforestation of those 900 million hectares, the world goes in the opposite direction. If the "current trajectory" is not corrected, the article points out, the global forest canopy cover can shrink by 223 million hectares by 2050. And most would be lost in the tropics. "Our results highlight the opportunity to mitigate climate change through global forest restoration, but also the need for urgent action," summarizes the article.